About 20 percent of North Korean children are stunted because of malnutrition, and half the children in rural areas are drinking unsafe water, a senior U.N. official visiting the country said.

Much progress has been made compared with 20 years ago, but "significant humanitarian challenges" remain, Mark Lowcock, the undersecretary general for humanitarian affairs, said Wednesday at a news conference in Pyongyang, the capital of North Korea. The U.N. issued a transcript of his remarks.

The United Nations is trying to raise $111 million to meet health, water and sanitation and food security needs for about 6 million people in North Korea. Only 10 percent has been raised so far, Lowrock said, through donations from the Swedish, Swiss and Canadian governments.

U.N. Secretary-General Antonio Guterres urged donors on Thursday to fund the U.N. appeal "to try to address directly the humanitarian aspects that exist in North Korea." 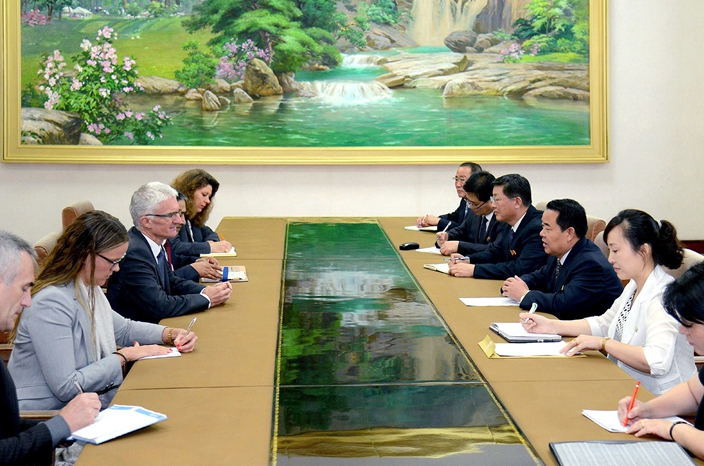 In this Wednesday, July 11, 2018, photo by the North Korean government, Undersecretary General for Humanitarian Affairs Mark Lowcock, third from left, listens to North Korean Health Minister Jang Jun Sang, third from left, during a meeting in Pyongyang, North Korea. The senior U.N. official visiting North Korea is highlighting malnutrition, drinking water and a shortage of medicines as problems facing the country. Independent journalists were not given access to cover the event depicted in this image distributed by the North Korean government. The content of this image is as provided and cannot be independently verified. (Korean Central News Agency/Korea News Service via AP)

The proportion of children affected by stunting, a failure to develop physically and cognitively, has fallen to 20 percent from 28 percent in 2011, but that "is still a high number," Lowrock said.

"Too much of the water is contaminated, which is a cause of disease and threatens the development of too many children," he said, according to the transcript.

Besides malnutrition and water, Lowrock also highlighted a shortage of drugs and medical supplies and equipment. One hospital he visited this week had only enough drugs for 40 of its 140 tuberculosis patients, creating dilemmas for doctors who have to figure out what to do, he said.

Lowrock said that Kim Yong Nam, a senior official, briefed him on the government's commitment to denuclearization and the new focus on economic development as a top priority.

Video: Ex-vegan, 56, claims switching to diet of raw meat has given her the body of a 25-year-old

North Korea deports American even as it boasts of new weapon