Molly Matthews was diagnosed with psoriasis aged 11 after noticing dry flakes in her scalp – but, despite nasty comments, she’s proud of her skin.

A student plagued by extreme psoriasis – an incurable skin condition – has embraced its characteristic red welts by dubbing them her “tattoos.”

Molly Matthews, now 16, was just 11 when she first noticed dry flakes in her scalp and assumed it was dandruff – until it spread down her head and neck, leading to a diagnosis of psoriasis, which affects around 2 per cent of the UK population.

But rather than hiding away, the confident teenager, who lives with her family in Birmingham and has just finished her GCSEs, posts pictures of her bare complexion on Instagram, saying: “The reaction has been amazing.” 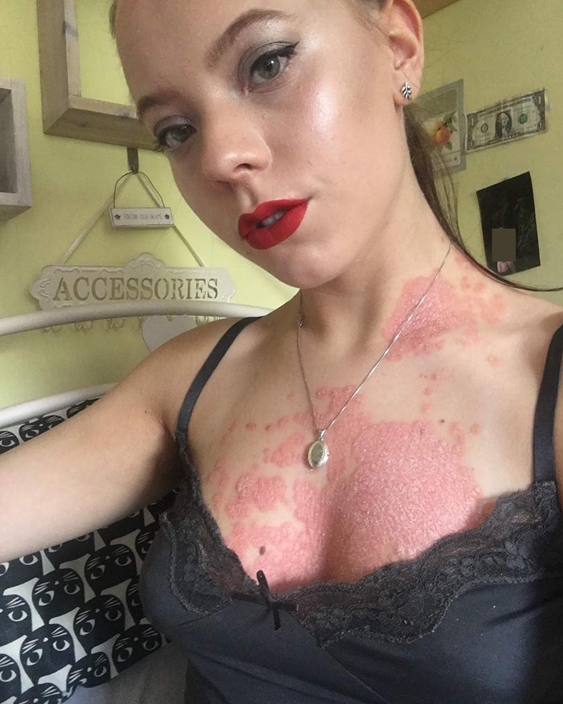 She continued: “Before I set up my Instagram, I hadn’t openly talked about my psoriasis before, so I was a little nervous.

“I’m tired of people pitying me, or saying I’m brave for showing off my skin. This isn’t brave – it should be the norm.”

Molly, whose welts can crack and bleed, is keen to let people know that she loves her skin.

She continued: “I do get some nasty comments. People ask what’s wrong with me, or tell me my skin looks bad. 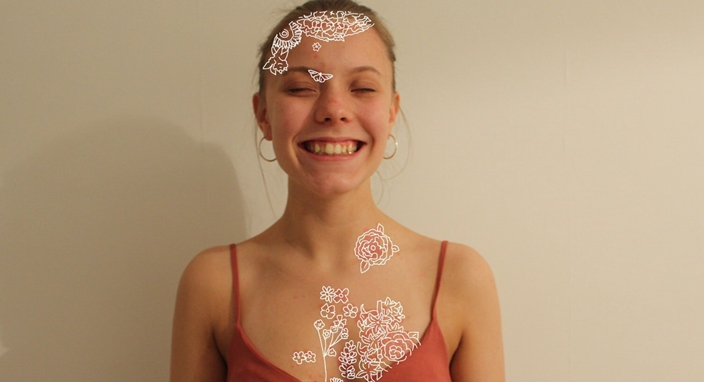 “I’ve even had someone tell me not to wear red lipstick as it makes my psoriasis look worse – but that just made me go out of my way to wear it even more.

“That kind of thing can be incredibly damaging to people struggling with self-esteem, but I actually love my skin.”

“I’m very comfortable having it out, and don’t feel the need to hide. I always say I won’t need tattoos when I’m older, as the psoriasis patches already look like little flower designs,” Molly added.

Molly had just started secondary school when she noticed the first tell-tale signs of the condition on her scalp, which doctors initially thought were dandruff. 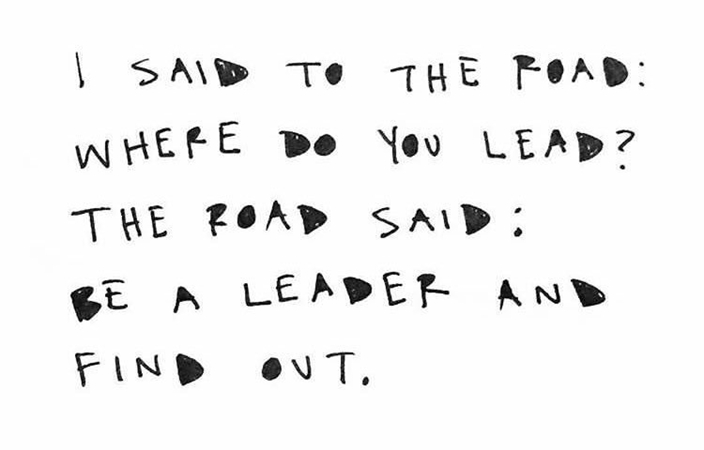 Prescribed anti-dandruff products, when they made no difference, she was referred to a dermatologist and diagnosed with psoriasis – caused, according to the NHS, by an increased production of skin cells.

Sufferers make and replace them every three to seven days, instead of the usual three to four weeks, with the resulting build up of cells causing dry, itchy patches.

Molly said of her diagnosis: “I have family members with the condition, so at first I felt quite pessimistic, as I’d seen them struggle.

“I also go to an all girls’ school, so there’s an awful lot of pressure on looks. At the time of my diagnosis, I was 11- an age when I didn’t want to be different. When it’s something as visible as the skin on your face, though, it’s hard to blend in. Thankfully, the girls at school have been lovely.” 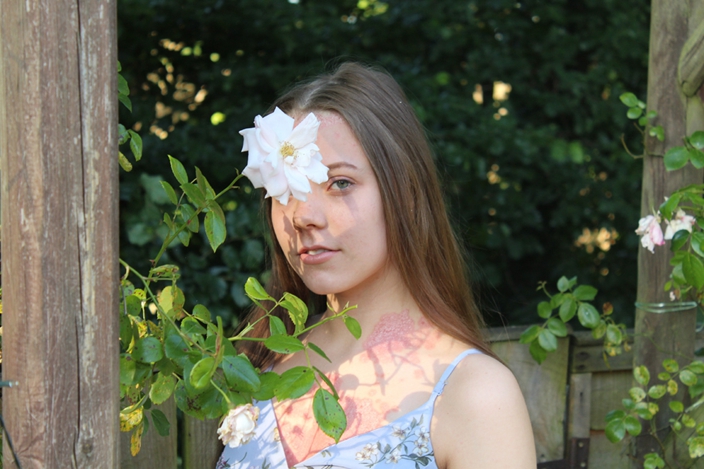 Molly has now set up an Instagram, where she posts pictures of her bare complexion (PA Real Life/Collect)

In time, Molly’s psoriasis began to spread down her back, chest and limbs, but instead of fretting, she soon grew very comfortable with her condition.

Although it can cause her pain, particularly in the heat, or when her skin cracks and bleeds, she has learned to manage her psoriasis well.

She regularly moisturises with coconut oil – preferring to avoid steroid creams, which can cause problems during withdrawal – and ensures she only uses very gentle, vegan products, with natural ingredients. 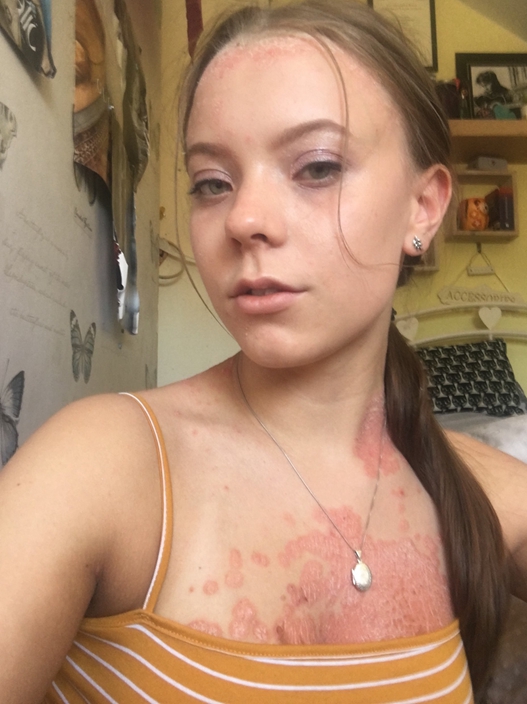 She said: “I get as much sun as possible, as the UV rays really help. People do suggest sunbeds to me, but I’m a little hesitant, as they carry so many risks, particularly of skin cancer.

“I have an initial consultation booked later in August to talk about phototherapy treatment. It still uses UV rays, but is much more medically supervised.”

In February 2018, Molly’s confidence reached new heights, when she came across the #getyourskinout campaign on Instagram.

Launched by Holly Dillon, who has lived with psoriasis since she was 14, the body positive movement aims to raise awareness of the condition – encouraging those who have it to embrace their skin. 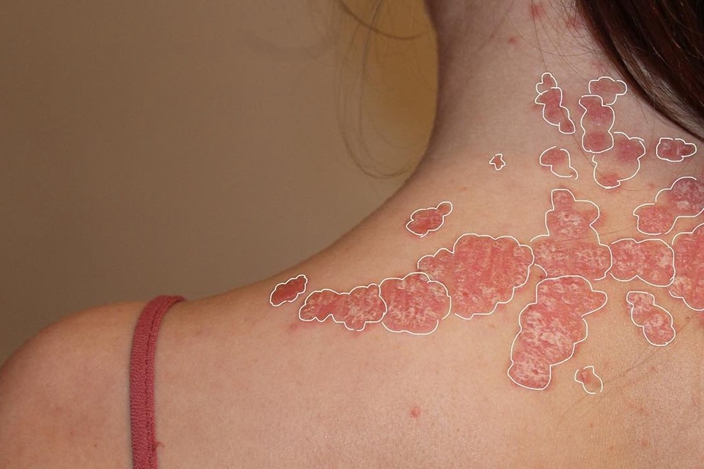 “I felt so unbelievably happy to finally see people with psoriasis come together and share their stories,” said Molly. “There was a great sense of community amongst the movement.

“Not long after, the fashion brand Missguided launched a new campaign and included a model with psoriasis.”

She added: “They have no idea how much it meant to see it being normalised, not hidden – especially to a girl like me, diagnosed at a time where you’re self-conscious anyway and there’s a lot of pressure around looks.”

Inspired, Molly set up her own Instagram page, which she now fills with bare-faced selfies.

Offering advice to others with psoriasis on how to embrace their condition, Molly continued: “Don’t compare yourself to other people. Everybody with this condition is different, and finds that different things work.” 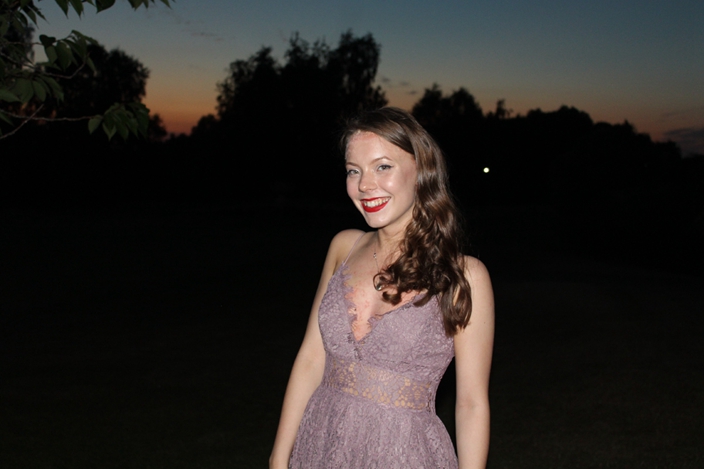 “It’s great to see celebrities like Kim Kardashian and Cara Delevingne speak out about it, but it’s also frustrating, as not everyone can afford the expensive treatments they have,” Molly continued.

“I found taking pictures helped a lot. It gave me a chance to properly look at myself and appreciate when I was having a good day.

“You don’t have to love your psoriasis, but there’s a lot to be said for taking a moment to recognise when you look nice. I don’t think of myself as ugly because of my skin – it’s just part of me.”