Lauren Faye Moss says the star has changed her life.

Taunted over her size 24 figure, a woman whose relationship with food became toxic, told how she lost nine stone to look like her idol, Britney Spears – and now works as a tribute act to the star.

Talented singer Lauren Faye Moss, 30, of Mansfield, Notts. – who now weighs 10st 8lb and wears a size 10 – lost herself in music to escape from cruel bullies, who said she “waddled like a penguin”.

Filled with self-loathing, weighing 19 stone 7lb, Lauren started making herself sick and plummeted to a tiny size 6, turning to counselling for support. 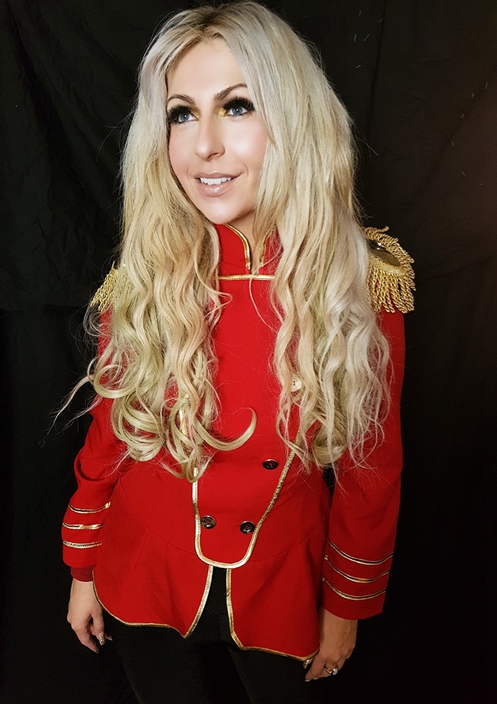 And, when people commented on her likeness to Britney, as she recovered, she used her as a role model, saying: ” She was my inspiration and helped me through a really tough period in my life.

“I am not a look-a-like, but an impersonator, because I also sound so much like her. She is an incredible woman, who motivated me to change my life.”

Overweight even as a child, Lauren’s mum Deborah Moss, 54, shopped for her daughter’s clothes in the adult sections of Marks and Spencer and plus-sized store Evans.

A diagnosis of slipped capital femoral epiphysis (SCFE), a shift at the upper part of the thighbone or femur that results in a weakened hip joint, aged 11, had caused Lauren’s alarming weight gain.

She recalled: “Kids at school were so cruel, telling me I waddled like a penguin because of my size and hip condition. 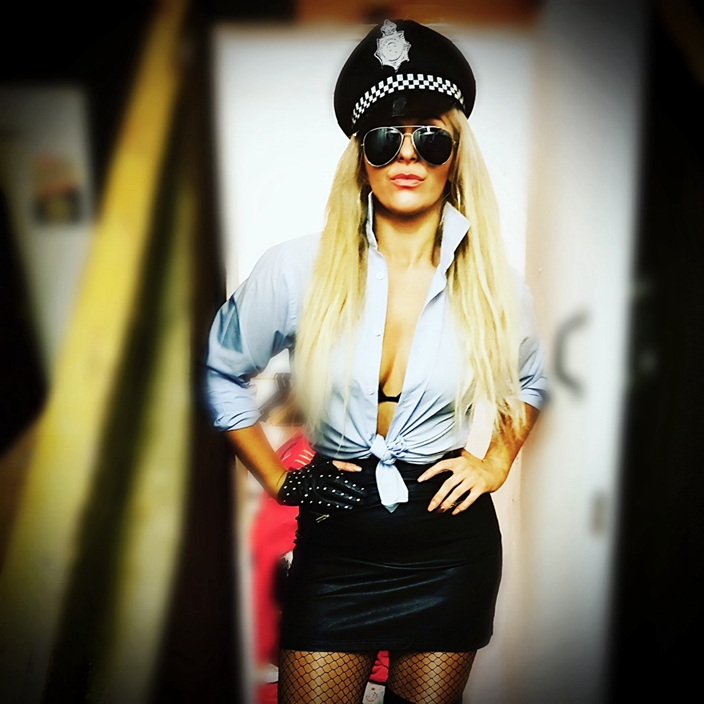 “It took four years to be diagnosed with SCFE, and during that time my weight piled on because I could barely walk, let alone run or exercise properly.”

And, as Lauren’s weight continued to soar and bullies taunted her, she turned to song.

“I had always loved singing and acting, and with cruel bullies telling me how fat I was, it was my only release,” she said.

She added: “It was singing, acting, and imitating celebrities that kept me on track.” 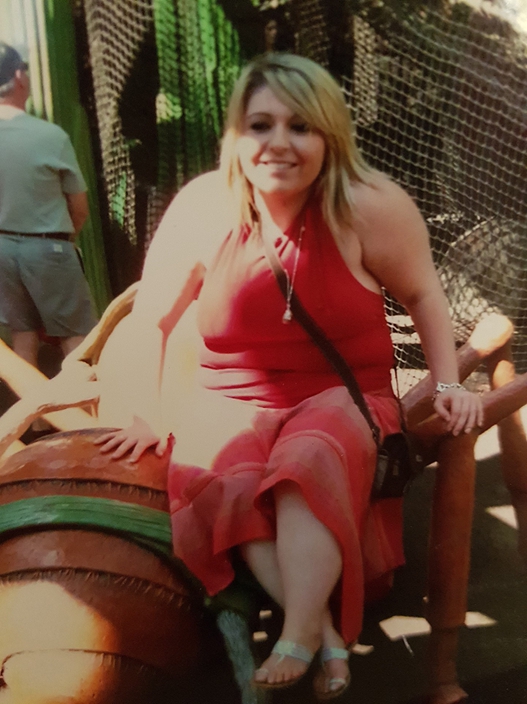 But it was seeing pop star Britney Spears performing Hit Me Baby One More Time, her breakthrough hit, in 2000, that eventually helped Lauren, then aged just 12, to realise her dream.

She smiled: “I saw Britney performing in the school outfit with such a perfect voice and thought, ‘I want to be like her.’ She was absolutely gorgeous and I was desperate to look like her.”

But it took another eight years for Lauren to embark on a turbulent weight loss regime, in a bid to look like her idol.

During that time she also attended Stagecoach Performing Arts School in Sheffield and Chesterfield and had private singing lessons, to nurture her impressive talent. 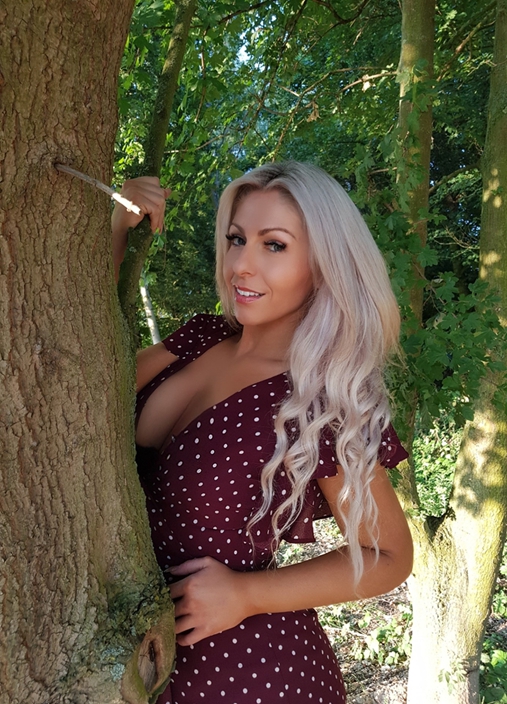 Despite showing promise, Lauren was plagued by insecurities, triggered by her painful hips which needed to be surgically pinned when she was 11.

Often in agony and dealing with impaired mobility, she found comfort in food – eating double portions for breakfast, lunch and dinner.

By the time she was 19, Lauren weighed 19 stone 7lb and was squeezing into size 24 clothes.

She said: “I don’t know how I got myself to the weight I did and I really had no idea how large I had become.”

Lauren continued: “It was only when I was knocked out of the BBC reality show How Do You Solve a Problem Like Maria? – auditioning for the role of Maria von Trapp in the Sound of Music – that I realised I needed to change.

“Despite getting down to the final 20, I knew they would never hire a fat Maria for the part.” 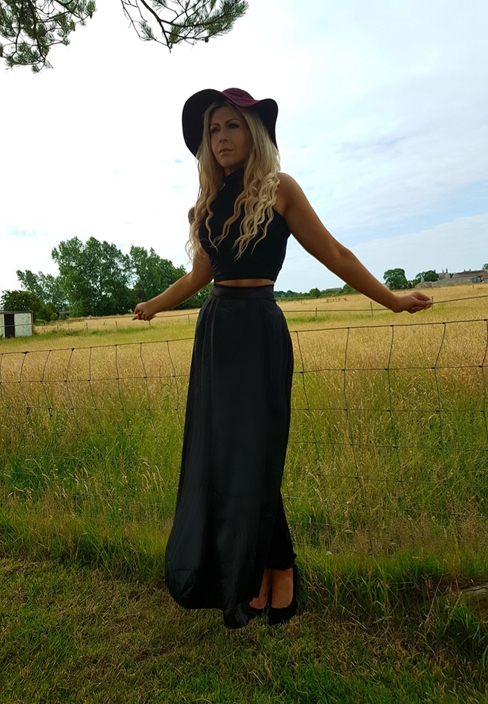 Dejected and desperate to be a star, Lauren’s mind returned to her beloved Britney.

“I’d followed her career, singing her hits Toxic, Gimme More and I’m Not a Girl, Not Yet a Woman in a lot of my auditions, as well as practising at home,” she said.

“I knew I needed to get healthy and saw Britney as my inspiration to sort my life out and slim down.

“So, determined to lose weight, I even secretly set Britney as my phone screensaver, as a goal for myself.”

Too intimidated to go to the gym, Lauren started power-walking at night, swapping unhealthy breakfasts of toast slathered with butter for porridge; eating salads for lunch and chicken with steamed vegetables for dinner.

But, as the weight began to drop off, she became obsessed with slimming and started to make herself sick.

She said: “I pushed my body to the limits. I would go all day, just drinking coffee and not eating anything. Then, at night, I would take two laxatives or make myself throw up.”

Lauren continued: “I was auditioning all the time, working in London and LA, writing and singing songs. “I had a crazy schedule trying to ‘make it’ and didn’t look after myself.”

Plummeting to a tiny size six, aged 28, Lauren’s hips began to be painful again and she was told she would need a full hip replacement.

She said: “Too tiny and weak for surgery, I realised I needed to get properly healthy – to be a normal weight and size.”

“After having counselling and eating and exercising sensibly, I reached the 10 stone mark and finally had the operation on my right hip at Sheffield’s Claremont Hospital when I was 28. I still need to have the left one done at some point in the future.”

Astonishingly, as she reached a healthy size 10, Lauren started attracting comments from people comparing her to her idol.

“As I became healthier, people would tell me I looked a bit like Britney, which was the biggest compliment I could ever have,” she said.

“So, I started to model myself more and more on her look. With the long, blonde hair with curls in and gorgeous white teeth.

“I began receiving bookings to perform as her and now do two shows a month as her.”

Lauren continued: “I also work as a tribute act to Madonna and Lady Gaga, and am also a female vocalist around the world.

“It’s a great job to have. I’m extremely versatile and cover most female icons that I can sound like and look a little like too.”

Lauren was even asked to perform as Britney at the official Britney Spears after show party on August 17 , after the star’s concert in Scarborough.

Lauren, who also writes her own music and is looking to be signed by a record label, recalled: “It was on the same day as her performance, I was incredibly honoured and simply couldn’t resist.

“She inspired me to take my career forward. I’ve never met the woman herself, but if I did, I would tell he she has changed my life.

“In the words of Britney, I am now Stronger!”

Trump, Biden absorb news of Ginsburg death on the fly

AP Explains: What happens with the Supreme Court vacanc ...

US carrier transits Strait of Hormuz amid tensions with ...