A stray iguana was spotted in Lancaster and rescued by RSPCA inspectors.

A stray iguana has been rescued by RSPCA inspectors from a cherry tree overlooking a canal in Lancaster.

The rescue, which took place on September 10, involved six RSPCA inspectors, including members of the specialist water rescue team, and a tree surgeon. A previous attempt to catch the iguana, thought to be an escaped or dumped pet, the week before, was unsuccessful.

RSPCA deputy chief inspector, Carl Larsson, said: “We couldn’t believe it when we got the call on Monday saying he was back in the cherry tree. “It’s thought he’d been straying for around two months, that’s how long the callers said they’d been seeing him around for. It’s a miracle that he’s survived out in the open for so long.

“Hopefully we’ll find this lucky iguana’s owner, but if not he’ll be re-homed.” 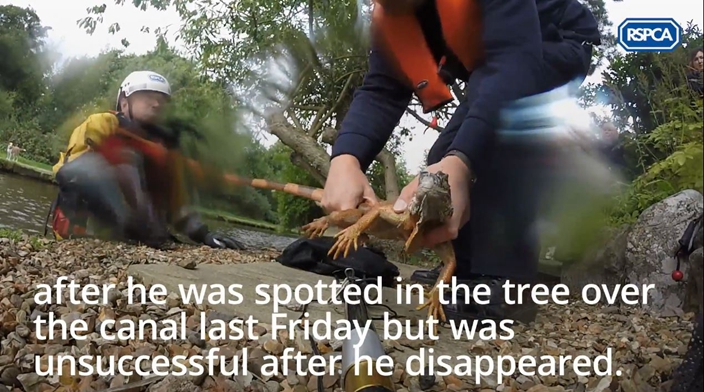 The young male iguana was taken to a specialist exotics vet at The Veterinary Health Centre in Lytham St Annes for examination, and has now been transferred to an exotics expert.

The special moment for Lewis Lloyd ...

Rescued seal pups released back into the wild