The latest surveys of Japanese manufacturers suggest the world's third-largest economy is headed for a slowdown, with demand stalling both at home and abroad as trade tensions simmer and China's economy slows.

The Bank of Japan's quarterly "tankan" survey of major companies, released Monday, showed confidence deteriorated in March compared with December. The main index for major manufacturers fell to 12 in March from 19 in December, the measure's biggest drop in more than six years. 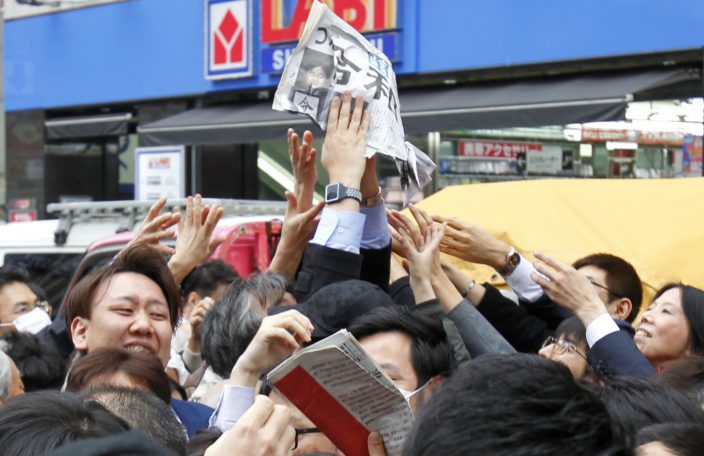 People try to receive a copy of extra edition of a local newspaper reporting the name of new era “Reiwa” is unveiled in Tokyo, Monday, April 1, 2019. Japan says next emperor Naruhito’s era name is Reiwa, effective May 1 when he takes the throne from his father.(AP PhotoKoji Sasahara)

The index for large non-manufacturers also fell, to 21 from 24, is worrying, said Marcel Thieliant of Capital Economics.

"The 4-point drop in the all industry index suggests that annual GDP growth came to a halt in the first quarter, consistent with our own forecast," he said in a commentary.

Meanwhile, another survey of factory purchasing managers, the Nikkei Manufacturing PMI, also showed the outlook darkening with slowing demand both in Japan and abroad. At 49.2 in March, it was slightly above February's reading of 48.9, but below the 50 level that indicates expansion. 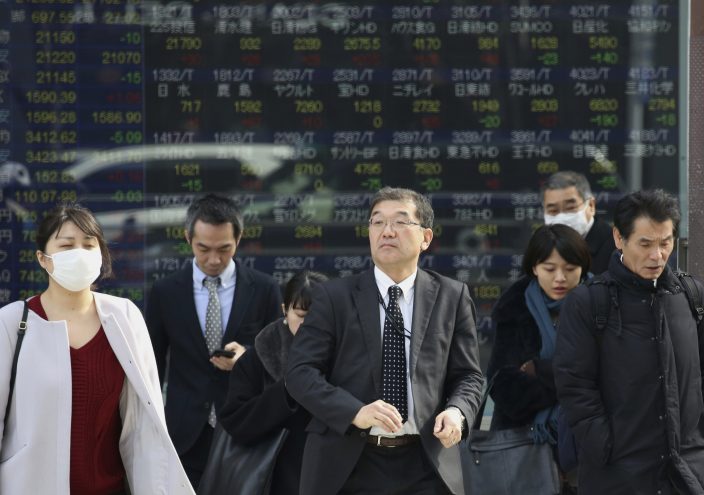 FILE - In this Feb. 15, 2018, file photo, people walk in front of an electronic stock board of a securities firm in Tokyo. The latest surveys of Japanese manufacturers are pointing to a slowdown for the world’s third-largest economy. The Bank of Japan’s quarterly “tankan” survey of major manufacturers on Monday showed a deterioration in confidence in March compared with December. (AP PhotoKoji Sasahara, File)

The reports were an inauspicious background for the announcement Monday of the name for the coming era after Emperor Akihito's abdication on April 30. The new era name of "Reiwa" or "ordered peace," takes effect on May 1 when Ahikito's son Naruhito will ascend the Chrysanthemum Throne.

That will bring to an end the "Heisei" era, which spanned the bursting of Japan's economic bubble of the late 1980s and years of economic doldrums in the 90s and early 2000s.

Prime Minister Shinzo Abe's strategy of revitalizing the economy through with massive monetary stimulus, government spending and reforms meant to make Japan more dynamic and competitive have helped fend off deflation. But it has not spurred the levels of consumer spending and corporate investment hoped for when "Abenomics" was first announced.

Abe said in a news conference Monday that the intention is for the coming era to bring new hope.

Huawei giving employees bonus for coping with US sanctions