With the game tied at 4, Betts hit a leadoff shot off Diego Castillo (0-2) and Moreland connected three pitches later.

Christian Vazquez also homered and Brandon Workman (1-1) went 1 2/3 scoreless innings for the Red Sox, who are 7-13 and trail the AL East-leading Rays by seven games. Ryan Brasier worked the ninth to pick up his fourth save. 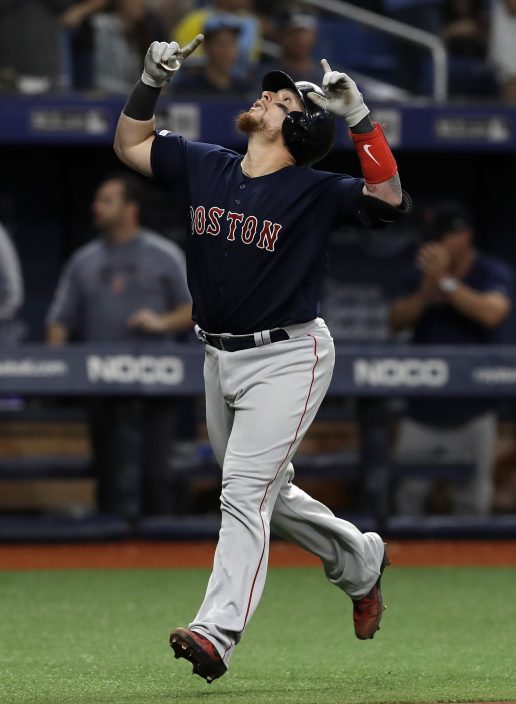 The Rays are the last team in the majors to have consecutive losses this season. Castillo was also the loser in a 6-5, 11-inning loss to Baltimore on Thursday night.

Daniel Robertson, mired in an 0 for 21 slide, had a two-run double during the sixth.

Betts, hitless in his previous 12 at-bats, doubled in the sixth and scored as the Red Sox grabbed a 4-2 lead when J.D. Martinez extended his hitting streak to nine games with an RBI single.

Brandon Lowe hit his fifth homer in the last nine games, a solo drive that just cleared the fence at the 322-foot mark down the right-field line in the second before Garcia's third-inning RBI triple as the Rays went up 2-0.

Mike Tauchman also went deep and the Yankees got four solid innings from their bullpen to bounce back from a listless performance against the last-place Royals in the series opener.

Sabathia (1-0) did not allow an earned run over five innings, moving to 15-1 in the regular season following a Yankees loss since 2017. He gave up three hits, overcame four walks and finished with five strikeouts to leave him six shy of 3,000 for his career.

Luis Cessa permitted a run on back-to-back doubles by Hunter Dozier and Alex Gordon to begin the sixth, but pinned a runner at third base with consecutive strikeouts to end the inning. Adam Ottavino, Tommy Kahnle and Zack Britton closed with hitless relief in an intermittent rain.

Gardner gave New York a 2-1 lead in the third with his drive off Jakob Junis (1-2), making his first appearance at Yankee Stadium since July 26, when his fastball broke Aaron Judge's wrist. The right-hander dropped to 0-3 in the Bronx.

Kyle Hendricks struck out a season-high 11 over seven scoreless innings in his first win to lead Chicago over Arizona.

Hendricks (1-3) became the third consecutive Cubs starter to go seven innings without allowing a run after Jose Quintana and Cole Hamels did it in back-to-back shutouts against Miami. The right-hander gave up three hits and two walks after losing his first three starts.

The Cubs went 31 innings without allowing a run, matching their longest streak since July 1976, before Brad Brach gave up an RBI double to Ketel Marte with one out in the ninth.

Kris Bryant drove in two runs with a wind-aided, bases-loaded double in the second. He also singled and scored in a two-run sixth.

Anthony Rizzo hit an RBI triple in the fourth as the Cubs chased a wild Merrill Kelly (1-2). Willson Contreras added two hits, including an RBI single against Matt Koch in the sixth.

The Diamondbacks had won four in a row.

Jordan Lyles cruised through six innings before taking a line drive off his pitching hand, Starling Marte and Erik González were also pulled following a collision in the field, and short-handed Pittsburgh beat San Francisco.

Lyles (0-2) continued his hot start, striking out six and allowing four hits while dropping his ERA to a major league-best 0.53. He was removed with a bruised right hand after being struck by Joe Panik's line drive in the sixth.

Marte and González collided in the eighth. Marte charged from center on a softly hit ball by Yangervis Solarte and slammed into the shortstop González. González walked off on his own power. Marte was able to stand briefly, but the team insisted he ride in a cart off the field.

Pittsburgh got all of its runs against Madison Bumarner (1-3) in the first inning. Francisco Cervelli had a two-run double, and Pablo Reyes and JB Shuck added RBI singles. Cervelli ended an 0-for-24 skid.

Bumgarner allowed just two more hits over his final five innings. He struck out seven. Felipe Vázquez struck out the side in the ninth for his sixth save.

Yoan Moncada hit a mammoth home run in the first inning, and Chicago scored five runs in the seventh inning to break the game open and beat Detroit.

Carlos Rodon (3-2) allowed a run and three hits in six innings for Chicago, which was without manager Rick Renteria and shortstop Tim Anderson, who were serving suspensions for their actions during Wednesday's bench-clearing fracas against Kansas City.

Detroit manager Ron Gardenhire didn't make it to the end of the game either. He was ejected in the fifth inning for having words with plate umpire Todd Tichenor after Tigers starter Jordan Zimmermann (0-3) walked in a run to give the White Sox a 2-1 lead.

Zimmermann walked four, one shy of his career high, and allowed five runs in 6 1/3 innings.

Miami snapped a four-game losing streak by scoring runs on an error, a walk and a hit batsman in a win over Washington.

Miami totaled just six hits and went 1 for 10 with runners in scoring position. But pinch-hitter Martin Prado's bases-loaded walk in the sixth put the Marlins ahead for the first time since Saturday, and they won after being shut out in the past two games.

Caleb Smith (2-0) struck out eight and allowed one run in six innings. He won his second start in a row and lowered his ERA to 2.35.

Three relievers completed a six-hitter. Sergio Romo pitched a perfect ninth for his second save, and his first since March 31 as Miami (5-15) won a series opener for the first time.

George Springer doubled twice and had one of Houston's four doubles in a three-run fifth inning.

Verlander (3-0) limited the Rangers to one run and three hits over seven innings. He struck out eight and walked three.

Danny Santana hit a solo homer in the sixth for the Rangers, whose four-game winning streak had been the longest in the American League. Joey Gallo launched a towering solo homer in the ninth that measured 442 feet.

Drew Smyly (0-2) struck out eight but walked three and allowed four runs while throwing 102 pitches in his 3 2/3 innings.