Toronto pitcher Matt Shoemaker injured his left knee in a rundown chase, and the Blue Jays went on to beat the Oakland Athletics 10-1 Saturday.

Rowdy Tellez and Brandon Drury hit back-to-back homers during a five-run fourth inning. Justin Smoak also homered and shortstop Freddy Galvis made an over-the-shoulder, barehanded catch as the Blue Jays won for the fifth time in six games on their road trip.

Shoemaker, sidelined in recent years by a series of injuries, was hurt while chasing Oakland's Matt Chapman in the third inning. The 32-year-old starter applied the tag and spun around to avoid contact. As he twirled, Shoemaker appeared to injure his knee. 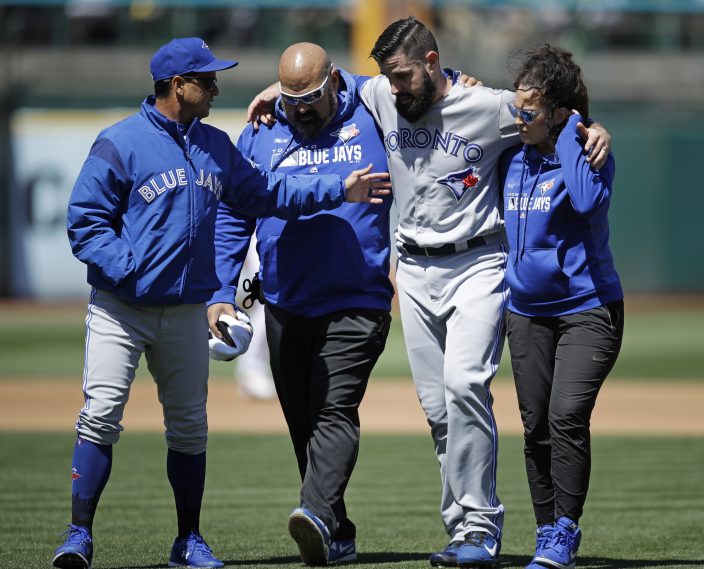 Toronto Blue Jays manager Charlie Montoyo, left, speaks with pitcher Matt Shoemaker, second from right, as Shoemaker is helped off the field after sustaining an injury during a rundown play against the Oakland Athletics in the third inning of a baseball game Saturday, April 20, 2019, in Oakland, Calif. (AP PhotoBen Margot)

Shoemaker hopped around before falling to the ground as a team trainer rushed out. He was down for several moments and sat with his head in his hands before being helped to his feet and off the field.

Limited to seven starts last year with the Angels because a strained right forearm, Shoemaker entered the day 3-0 with a 1.75 ERA for his new team. In 2016, Shoemaker sustained a skull fracture when he was hit in the head by a line drive, and he's had lingering forearm trouble for a while.

Tellez and Drury teamed up again in the fifth with back-to-back doubles that made it 7-0. Smoak hit a two-run homer off Ryan Buchter in the sixth.

Galvis' defensive gem ended the eighth and came after Josh Phegley lofted a flyball into short left. The crowd of 31,140 gave Galvis a rousing ovation.

Athletics: 1B Matt Olson is progressing in his recovery from hamate bone surgery in his right hand but there are no plans to rush him back. "We want him to be as close to 100 percent," manager Bob Melvin said. . RHP Marco Estrada met with another doctor Friday regarding his lower lumbar strain injury and Melvin indicated it's likely the pitcher will spend more than 10 days on the injured list. Chris Bassitt will take Estrada's turn in the rotation Monday against Texas.

LHP Brett Anderson (3-0, 2.63 ERA) is off to his best start since 2012 and pitches for the A's in the series finale Sunday. Anderson has a four-game winning streak dating to last season. RHP Aaron Sanchez (2-1, 2.86) goes for the Blue Jays seeking his first win in five career appearances against Oakland.

The Treasury Department is project ...