When North Korean leader Kim Jong Un meets with Russian President Vladimir Putin for their first one-on-one meeting, he will have a long wish list and a strong desire to notch a win after the failure of his second summit with President Donald Trump.

But it's not entirely clear how much Putin can or will oblige.

Despite a relationship that goes back to the very foundation of North Korea, relations between Pyongyang and Moscow haven't always been the picture of comradery, or even particularly close. 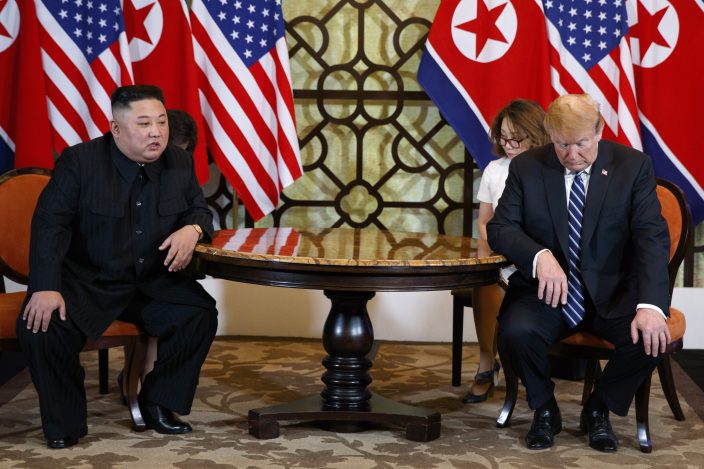 FILE - In this Feb. 28, 2019, file photo, North Korean leader Kim Jong Un, left, meets U.S. President Donald Trump in Hanoi, Vietnam. When Kim meets with Russian President Vladimir Putin for their first one-on-one meeting, he will have a long wish list and a strong desire to notch a win after the failure of his second summit with Trump two months ago. (AP PhotoEvan Vucci, File)

A look at what Kim is hoping to get out of his furtive pivot north, and why he might be looking to shake things up as his talks with the U.S. and parallel campaign to win massive investment from South Korea have stalled:

Kim has two urgent concerns as he heads to the summit. 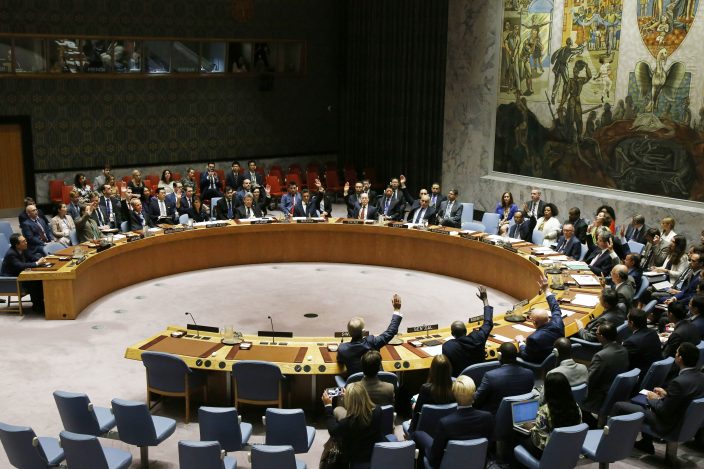 FILE- In this Sept. 11, 2017, file photo, the United Nations Security Council votes to pass a new sanctions resolution against North Korea during a meeting at U.N. headquarters. After the breakdown in North Korean leader Kim Jong Un's summit with U.S. President Donald Trump in Hanoi, his efforts to get out from under sanctions that are keeping him from doing that have reached an impasse. More than 10,000 North Korean laborers still employed in Russia, many working in the logging industry in the Russian Far East, are being kicked out by the end of this year as the U.N. sanctions resolution takes effect. (AP PhotoJason DeCrow, File)

More than 10,000 North Korean laborers still employed in Russia, many working in the logging industry in the Russian Far East, are being kicked out by the end of this year as a 2017 U.N. sanctions resolution takes effect. The laborers, who previously numbered as many as 50,000, have provided a revenue stream estimated by U.S. officials in the hundreds of millions of dollars that the Kim regime would like to keep flowing.

Kim is also looking at the possibility of a food shortage this summer. Russia has shown a willingness to provide humanitarian aid and just last month announced that it had shipped more than 2,000 tons of wheat to the North Korean port of Chongjin.

But his decision to more actively court Putin undoubtedly goes deeper than that. 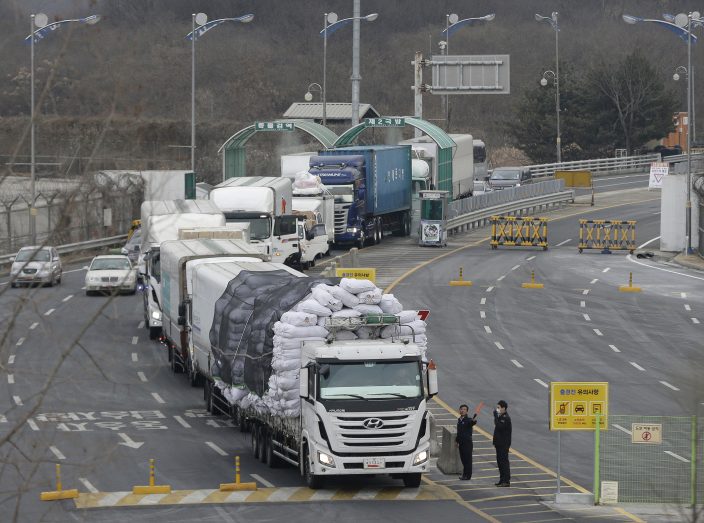 Despite all the talk in Washington about denuclearization, Kim's primary concern is improving his country's economy. After the breakdown in his February summit with Trump in Hanoi, his efforts to get out from under sanctions that are keeping him from doing that have reached an impasse.

North Korea has long depended on China as its primary trading partner. But that reliance, and the influence it threatens to give Beijing, makes many officials in Pyongyang nervous.

Kim has also pushed Seoul hard to participate in joint inter-Korean projects to rebuild its railroads and improve its moribund infrastructure. His appeal to Korean unity, however, has run headfirst into the South's allegiance to Washington, which has warned Seoul against any actions that would undermine sanctions.

According to internal documents obtained by a South Korean researcher and published this week in a Japanese newspaper, Kim wants to boost trade with Russia tenfold — to $1 billion — by 2020.

That would obviously require some significant easing of sanctions, which would seem unlikely. But it would also require a change in Russian behavior.

Unlike China, which has lots of businessmen on the ground in North Korea, Russia has a very small footprint in the North. Officials have long talked about big projects — including rail routes to Europe, or pipelines across the Korean Peninsula — but Putin hasn't shown much interest in actually carrying them out.

The Kim-Putin meeting, whose exact date has not been announced, is coming surprisingly late in the game.

It's been nearly a year and a half since Kim announced his plan to emerge from relative isolation at home and expand diplomatic relations with China and South Korea and open denuclearization talks with Washington.

He has since held four summits with Chinese President Xi Jinping, three with South Korean President Moon Jae-in and two with Trump.

The summitry has done a lot toward establishing Kim as a serious player on the world stage.

But the Hanoi summit showed his limitations. It ended with no agreements on either denuclearization measures or the lifting of sanctions, which may now be even more difficult to accomplish since both sides are digging in on hard-line negotiation positions.

Kim's decision to meet with Putin now may reflect his frustrations over that.

Putin has more experience with North Korea's leaders than most. He visited Pyongyang in 2000, and met with Kim's father, Kim Jong Il, in Moscow in 2001 and in Vladivostok in 2011.

Moscow played an instrumental role in bringing Kim's grandfather, Kim Il Sung, to power and helped rebuild the country after the 1950-53 Korean War. Those ties fell apart after the 1991 Soviet collapse and Russia's decision to end support for former Soviet allies amid its own economic meltdown.

Like Kim, Putin is no admirer of Washington's use of sanctions as a political tool. Even a cautious statement of solidarity with the North, or a rebuttal of any of Washington's "maximum pressure" policies, would be a win for Kim.

But Putin has a lot on his plate and good reason to be cautious about making any big new commitments.

He particularly doesn't want to anger China. Immediately after seeing Kim, Putin will fly to Beijing for a major international meeting on China's "Belt and Road" initiative, which could be lucrative for Russia.

If Putin chooses to take a more hands-on approach to North Korea, Washington's efforts to keep Kim's focus on denuclearization could get a lot more complicated.

He has already expressed his opposition to Trump's sanctions-centric approach.

It's also in Putin's general interest to weaken Washington's influence in the region — though, like China, Russia does not want a chaotic collapse in the North that would create a wave of refugees and economic instability.

So what's the bottom line?

Even if he isn't planning to make any immediate changes in his policies toward Pyongyang, meeting with Kim provides a good opportunity for Putin to reassert himself as a player in a contest for political influence that is, after all, right on his own border.

And for Kim, with the pressure from Washington not likely to let up soon, keeping all options open makes a lot of sense.