Two months after he failed to win a badly needed easing of sanctions from President Donald Trump, North Korean leader Kim Jong Un is traveling to Russia in a possible attempt to win its help as the U.S.-led trade sanctions hurt his country's already-struggling economy.

There are no signs of a financial or humanitarian crisis in North Korea. But some observers say the sanctions, toughened over the past several years, are gradually drying up Kim's foreign currency reserves and he is desperate to find ways to bring in hard currency. His propaganda service is already saying that North Koreans can survive with only "water and air."

Russia, along with China, has called for the easing of the sanctions, though both are members of the U.N. Security Council, which has approved a total of 11 rounds of sanctions on North Korea since 2006. Some experts say Kim may ask Russian President Vladimir Putin in a meeting set to take place in Vladivostok on Thursday to voice strong opposition to the sanctions, enforce them less stringently and send humanitarian food aid to North Korea. 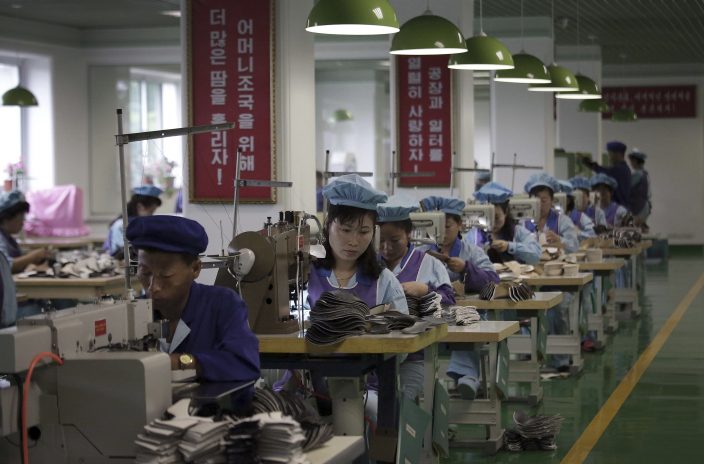 It's still unclear how much assistance Kim could get from Putin. Along with China, Russia isn't likely to want to openly evade the sanctions and face diplomatic friction with the United States. More than 90% of North Korea's foreign trade has gone through China, with which it shares a long, porous land border.

Analyst Go Myong-Hyun of the Seoul-based Asan Institute for Policy Studies said Kim's Russia trip, the first by a North Korean leader since 2011, may have been planned long before the February breakdown of the second summit between Kim and Trump in Vietnam. Go said North Korea and Russia had wanted to discuss economic cooperation if the summit had resulted in an easing of sanctions.

What will still likely be on the agenda is a request by Kim for food aid. In February, North Korea's ambassador to the United Nations, Kim Song, issued an unusual appeal for "urgent" food assistance. North Korean officials blamed the shortage on bad weather and the sanctions. 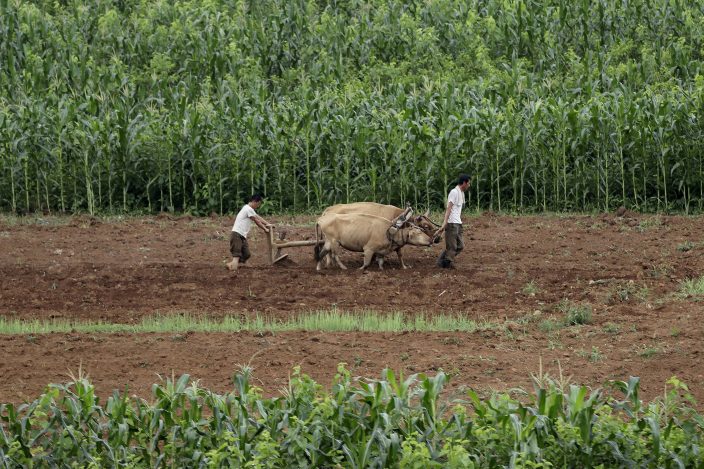 FILE - In this July 20, 2017, file photo, men plow fields along the Pyongyang-Wonsan highway in Sangwon near Pyongyang, North Korea. Two months after he failed to win a badly needed easing of sanctions from U.S. President Donald Trump, North Korean leader Kim Jong Un is traveling to Russia in a possible attempt to win its help as the U.S.-led trade sanctions hurt his country’s already-struggling economy. (AP PhotoWong Maye-E, File)

Analyst Cho Bong-hyun of Seoul's IBK Economic Research Institute said North Korea needs more than 1 million tons of food aid, so it would want Russia to provide hundreds of thousands of tons of corn, flour and other foodstuff. Russia could send North Korea food, but mostly in a secret manner, Cho said.

"There is a high possibility that Kim will ask Putin to be flexible on the issue as it's related to the inflow of dollars," said analyst Shin Beomchul of the Asan institute. He said North Korea may seek to persuade Russia to overlook North Korean visitors with short-term non-employment visas engaging in illegal work. 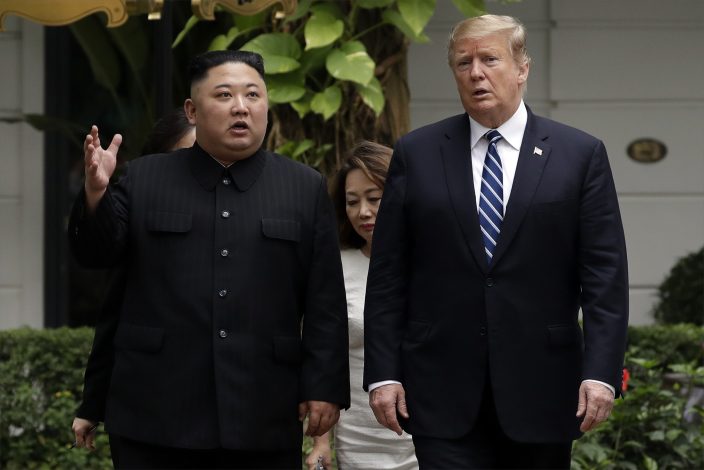 FILE - In this Feb. 28, 2019, file photo, North Korean leader Kim Jong Un, left, and U.S. President Donald Trump take a walk after their first meeting at the Sofitel Legend Metropole Hanoi hotel in Hanoi. Two months after he failed to win a badly needed easing of sanctions from Trump, Kim is traveling to Russia in a possible attempt to win its help as the U.S.-led trade sanctions hurt his country’s already-struggling economy. (AP PhotoEvan Vucci, File)

In May last year, South Korea's Unification Ministry said North Korea sends an estimated 50,000 workers aboard, mostly to China and Russia. Most work at factories, construction sites, lumber camps and restaurants. They often toil in tough working conditions and large portions of their salaries are taken by North Korea's government, according to activists and defectors.

After Kim failed to get sanctions relief from Trump in Vietnam, he called for national unity under the banner of self-reliance to surmount the sanctions. His state media called self-reliance "the treasured sword," a term previously used to refer to his nuclear weapons.

"It is necessary to sweep away the whirlwind of sanctions by the hostile forces," Kim said in a rare speech at the country's rubber-stamp parliament earlier this month. 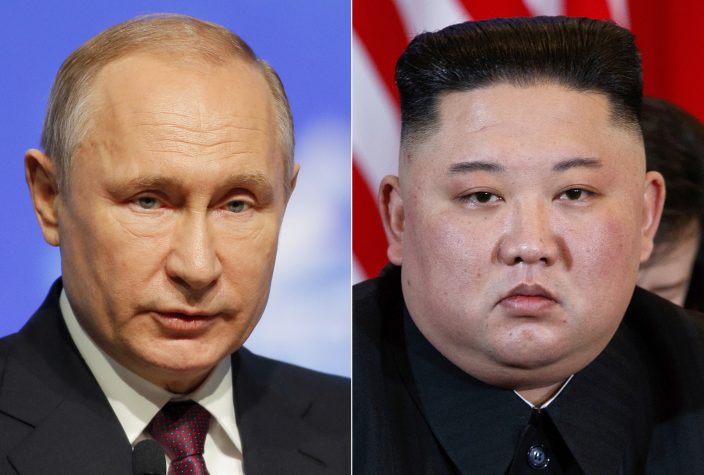 The Vietnam summit collapsed after Trump rejected Kim's calls for the end of five of the 11 sanctions that he said impede his country's civilian economy in return for partial steps toward nuclear disarmament. They include a ban on key exports such as coal, textiles and seafood; a significant curtailing of oil imports; and the repatriation of North Korean overseas workers by December.

These sanctions, approved one by one since 2016 when Kim began a series of nuclear and missile tests, are inflicting more pain than the six previously imposed sanctions that largely target North Korea's weapons industry.

The new sanctions especially affect North Korea's official external trade. According to China Customs figures, China's imports from North Korea dropped by 88% and exports to the North by 33% in 2018. South Korea's central bank said North Korea's economy contracted 3.5% in 2017 from a year earlier.

Some experts say Kim has likely used some of his foreign currency reserves to import goods from China to maintain price stability. Some say North Korea's huge trade deficit may have been offset by illicit border trade with China that is likely thriving again with lax enforcement of the U.N. sanctions. Others say North Korea is trying to locally produce items it had imported.

"It's certain that North Korea is releasing a large amount of money," Go said. "When its money runs out, it'll face an urgent situation and step up calls for sanctions relief."

There is no independently confirmed data on the size of North Korea's foreign currency reserves. Go said some economists estimate them at $5 billon. Outside speculation varies over how long North Korea can withstand the impact of the sanctions without major economic and social chaos.

Cho speculates North Korea will likely hold out for the next three to five years. But others say it could face a drain on its foreign currency reserves sooner, by December or next year at the earliest.

Whether the sanctions will eventually force Kim to fully give up his nuclear program is unclear. Kim considers his nuclear weapons a stronger security assurance than any non-aggression promises the U.S. could offer. In his April 12 parliamentary speech, he described the sanctions as a plot to disarm North Korea before trying to overthrow his government.

If there is an indication of a humanitarian crisis in North Korea, many experts say China will likely make large-scale food shipments to prevent the exodus of refugees from the North.

Thae Yong Ho, a former minster at the North Korean Embassy in London who defected to South Korea in 2016, said in a recent blog post that there are rumors among North Korean residents that Chinese President Xi Jinping will visit Pyongyang, North Korea's capital, in May. He said North Korea's hard-line stance will continue for the time being if it gets help from Russia and China.

The first woman who publicly accus ...