Asian and African leaders plan to press Beijing at a conference this week to reduce the politically volatile debt burden left by its Belt and Road Initiative to build ports and other trade-related infrastructure.

That may bring a note of conflict into the official celebration of President Xi Jinping's signature foreign initiative, which has stirred anxiety in Washington, Moscow and Tokyo that Beijing is trying to expand its global influence. The meeting starting Thursday brings together leaders or envoys from three dozen countries including Malaysia, Serbia and Kenya.

Debt "is going to be part of the prime minister's focus at the forum," said Billenne Seyoum, press secretary for Prime Minister Abiy Ahmed of Ethiopia. 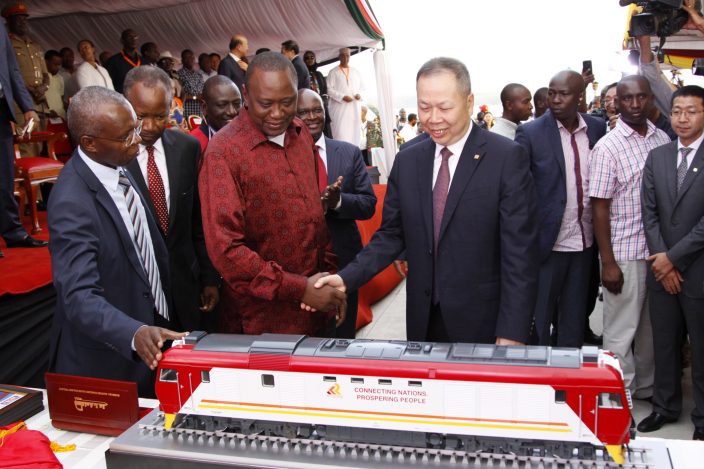 FILE - In this May 30, 2017, file photo, Kenyan President Uhuru Kenyatta, second from left, and Chen Fenjian, president of CCC, shakes hands next to a model of a locomotive during the opening of a Chinese-backed railway costing nearly $3.3 billion, one of the country's largest infrastructure project since independence in Mombasa, Kenya. The railway eventually will link a large part of East Africa to a major port on the Indian Ocean as China seeks to increase trade and influence. Asian and African leaders plan to press Beijing at a conference starting Thursday, April 25, 2019, to reduce the politically volatile debt burden left by its Belt and Road Initiative to build ports and other trade-related infrastructure. (AP PhotoKhalil Senosi, File)

Other governments welcomed Beijing's initiative in a region the Asian Development Bank says needs $26 trillion of investment by 2030 to keep economies growing. But countries including Nepal, Sri Lanka and Thailand have canceled or renegotiated railways and other projects they concluded were too expensive or unproductive.

Most projects are built by Chinese state-owned companies and financed with loans from government banks at commercial interest rates that critics say could leave borrowers mired in debt they cannot repay.

Beijing also faces grumbling by the United States, Japan, India and Russia that Belt and Road is a tool to build a China-centered political structure and erode their influence. American officials including Secretary of State Mike Pompeo have told countries considering Belt and Road projects to look closely at Beijing's motives and warned about debt. 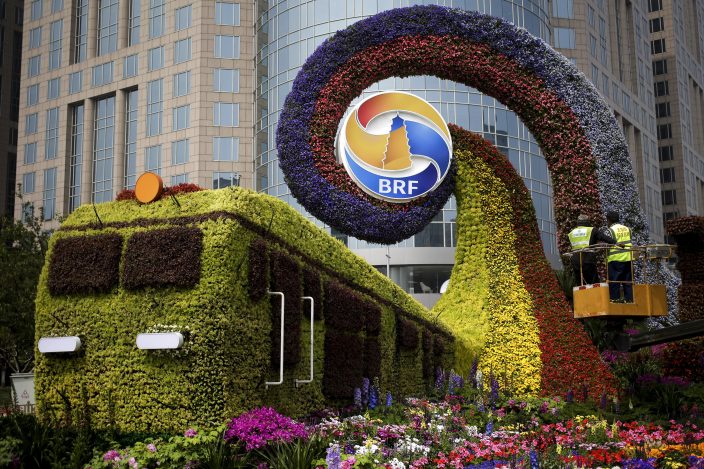 Workers on a platform install flowers on a decoration in a shape of a train for promoting the upcoming Belt and Road Forum in Beijing, Tuesday, April 23, 2019. The Belt and Road Forum which will open by Chinese President Xi Jinping this weekend in the capital city has draw leaders from around the globe. Xi, who has made the initiative a signature policy, agreed last month to seek fairer international trade rules and address the world's economic and security challenges, in what appeared to many as a rebuke to President Donald Trump's protectionist policies. (AP PhotoAndy Wong)

"BRI project financing will be a main topic for discussion" at the forum, said James Su of research firm Fitch Solutions in an email. He said Chinese leaders appear ready to discuss "more sustainable" financing to ease fears of a "debt trap."

"We see this as crucial for China as it seeks to reduce negative sentiment surrounding the initiative," said Su.

Beijing has given some borrowers more time to repay or made other concessions. Ethiopia's Abiy reached agreement in September to extend repayment for a $4 billion railway linking his country with neighboring Djibouti from 10 years to 30 years.

Pakistan, which is building 22 Belt and Road projects including power plants and highways, has run into a debt crunch that forced it to ask the International Monetary Fund for an $8 billion bailout. But authorities say Prime Minister Imran Khan has no plans to ask China to renegotiate their deals during this week's forum.

China has invested $13 billion in Pakistan and lent $6 billion for the China-Pakistan Economic Corridor, a series of 22 projects.

Despite debt concerns, Ethiopia and other governments express support for Belt and Road and want more Chinese financing.

Kenyan President Uhuru Kenyatta plans to pursue a $3.7 billion loan from Beijing this week to extend a Chinese-built railway, his government's ambassador to Beijing, Sarah Serem, told The Nation newspaper.

That is despite complaints the railway is unproductive and cannot pay for itself. The 962-kilometer (597-mile) project is intended to link Kenya with central Africa and Congo.

Kenya owes Chinese banks $3.2 billion for its first 472-kilometer (293-mile) link from the Indian Ocean port of Mombasa to the capital, Nairobi. Kenya is due to borrow almost $10 billion from Beijing for the full project.

The Nation said in September that Kenyatta wants China to pay for half of the next stage but other news reports said Beijing balked at that.

Beijing scored a diplomatic coup in March when Italy became the first member of the Group of Seven major economies, which includes the United States, to sign an agreement to support Belt and Road.

The number of countries that have signed at least preliminary Belt and Road agreements has risen to 115 from 64 in 2013, according to the Chinese government.

"As its relationship with the U.S. has soured, China is increasingly looking to the BRI to provide a tool for geopolitical influence," said Moody's analysts in a report in January.

Elsewhere in Europe, a 42-kilometer (26-mile) Chinese-built highway in Montenegro has prompted complaints the 810 million euro ($910 million) project is costly and wasteful.

"The project is completely unfavorable for Montenegro," said Ivan Kekovic, a civil engineer in Podgorica, the country's capital.

Montenegrin President Milo Djukanovic defended the deal, saying in an interview any contractors could bid but only Chinese companies submitted concrete proposals.

In the Indian Ocean, President Ibrahim Mohamed Solih of the Maldives says he wants to review the country's Belt and Road projects and debt.

Chinese officials say Beijing is learning from experience and examining borrowers closely to make sure they can repay loans.

Possibly due to tighter scrutiny, the number of new Belt and Road projects has plunged.

The total value of new contracts fell 42 percent in the first half of 2018 compared with a year earlier, according to Moody's.