The Latest on China's Belt and Road infrastructure building conference. (all times local):

Malaysian Prime Minister says he is "fully in support" of China's Belt and Road initiative, after his government decided to resume a China-backed rail link project once the Chinese contractor agreed to cut the cost by one-third. 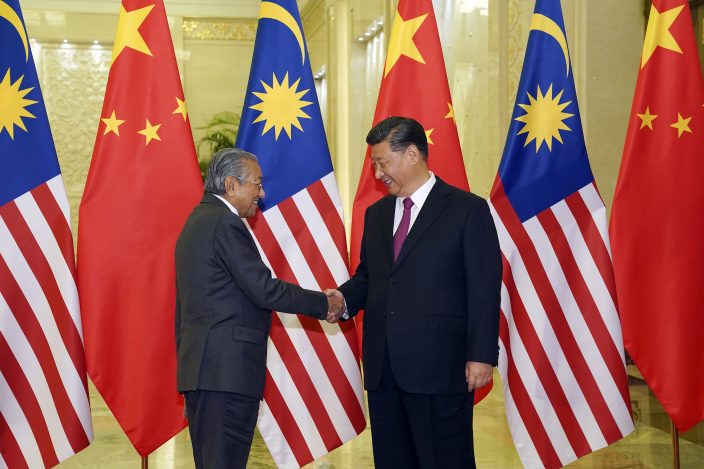 Chinese Premier Xi Jinping, right, shakes hands with Malaysian Prime Minister Mahathir Mohamad before a bilateral meeting of the Second Belt and Road Forum at the Great Hall of the People on Thursday, April 25, 2019 in Beijing, China. (Andrea VerdelliPool Photo via AP)

Addressing the second Belt and Road Forum in Beijing on Friday, Mahathir sought to erase doubts about Malaysia's desire to take part in the massive infrastructure juggernaut.

"I am fully in support of the Belt and Road initiative," Mahathir said. "I am sure my country, Malaysia, will benefit from the project."

Mahathir devoted much of his address to the need to confront environmental and law enforcement challenges created by global trade, particularly the burden on countries

Mahathir's decision to suspend the project after his election last May put a strain on ties with Beijing.

President Xi Jinping has promised to promote high financial standards for China's Belt and Road infrastructure-building initiative as Beijing tries to dispel complaints the multibillion-dollar project leaves developing countries with too much debt.

Xi avoided mentioning debt complaints in a speech Friday at the opening of a forum to celebrate his signature foreign initiative. But he said Beijing wants "open, green and clean cooperation" with "zero tolerance for corruption."

Developing countries welcome the initiative to expand trade by building roads, ports and other facilities across Asia and Africa to Europe. But high costs have prompted complaints some are falling into a "debt trap."

Chinese officials reject such complaints and issued guidelines this week for assessing debt risks to Belt and Road borrowers.

Israeli PM: Killing of Palestinian with autism a " ...

They haul food, fuel and other ess ...

Huawei giving employees bonus for coping with US sanctions

Graft ruling for Malaysian ex-leader a test for government