A high school football player who has been in the U.S. since he was a toddler was in custody for possible deportation to his native Mexico, prompting a protest Monday by classmates outside an Arizona sheriff's office.

Thomas Torres, who is scheduled to graduate May 22 from Desert View High School, was at a federal holding facility in Casa Grande, Arizona, according to the family he has been living with. Now, he is scheduled to appear in immigration court on that date.

Lorena Rodriguez said Torres had lived for years at her family's home, where he shared a room with her brother, who also is set to graduate. Their caps and gowns are already hanging in the bedroom closet. 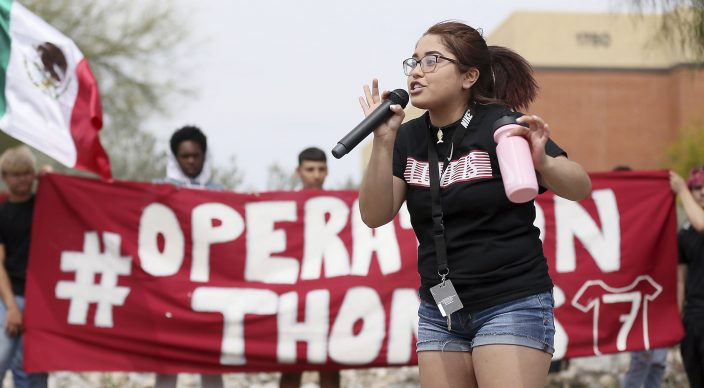 Quiriat Rosas, 17, speaks to the crowd after students from Desert View High School marched to the Pima County Sheriff's Department on Monday, May 6, 2019 in Tucson, Ariz. Approximately 200 students walked out to protest the detention of their classmate, Thomas Torres, who was stopped by a sheriff's deputy on May 2 and was detained until Border Patrol arrived. (Mamta PopatArizona Daily Star via AP)

Torres' detention, coming shortly before a major rite of passage in the only country he remembers, is a stark example of the Trump administration's crackdown on illegal immigration.

Rodriguez, who launched a GoFundMe page to raise money for Torres' legal costs, said the young man was a toddler when his relatives brought him from Mexico in search of a better future. She said his parents had long since returned to Mexico, leaving him alone in the U.S., and he had lived with her family throughout high school.

"People like Thomas are needed in this country," Rodriguez wrote on the fundraising site. "He's a hardworking young man willing to better his future." 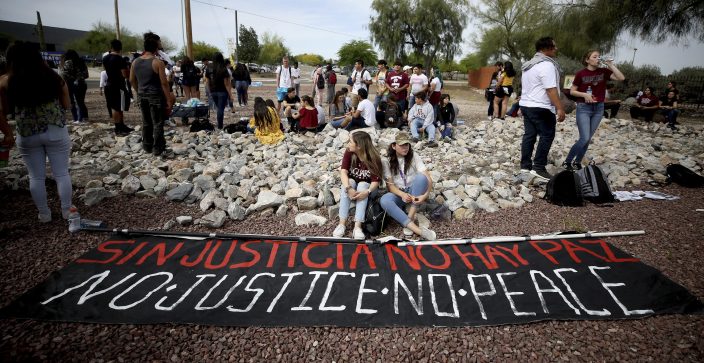 Students from Desert View High School sit by a banner after marching to the Pima County Sheriff's Department on Monday, May 6, 2019 in Tucson, Ariz. to protest the detention of their classmate, Thomas Torres, who was stopped by a sheriff's deputy on May 2 and was detained until Border Patrol arrived. (Mamta PopatArizona Daily Star via AP)

Although deportation proceedings involving high school students who have reached adulthood are not uncommon, the outpouring of support from Torres' classmates seemed unusual. A large portion of the population in Tucson's southern district, where the school is located, is Mexican-American.

Torres' classmates marched about 4 miles (6.5 kilometers) from the school to the sheriff's office to demand his release. They also called on all law enforcement agencies to not collaborate with immigration authorities.

"Thomas is the American Dream," said one of the many homemade signs carried by students protesting outside the sheriff's office. Other signs read, "Abolish the Border Patrol" and "Without Justice, There is No Peace."

Torres was taken into custody Thursday after a traffic stop by sheriff's deputies and turned over to Border Patrol, said Victor Mercado, a spokesman for the Sunnyside Unified High School District.

Border Patrol spokeswoman Meredith Mingledorff confirmed Monday that Torres is in federal custody and faces immigration charges after the agency was contacted by the Pima County Sheriff's Office.

Rodriguez said Torres told her family that he was unable to produce a driver's license when he was stopped by sheriff's deputies. Arizona does not issue licenses to people who are in the county without authorization.

The sheriff's office said Monday that a deputy stopped the car Torres was driving to check whether the insurance was up to date. The agency said in a news release that when Torres didn't produce a license he told authorities he was in the country illegally and the deputy contacted the Border Patrol.

There was no information on where Torres was when he was stopped.

A federal judge ruled in the 1990s that the Border Patrol violated the civil rights of Hispanic students and staff at an El Paso, Texas, high school by stopping them at the school without good cause to determine their citizenship. Bowie High School is just a few yards from the U.S.-Mexico border.

With worst to come, 3 in 4 hospitals already facing COV ...

Iranian attending college in Boston is denied entry to US