A quarter-century after the end of apartheid, South Africans go to the polls Wednesday for the sixth national elections since the demise of the harsh system of racial discrimination, although the country remains divided by economic inequality .

The African National Congress, the party of Nelson Mandela that has been in power since 1994, is likely to win a majority but it will face a difficult challenge to match the 62% of the vote that it won in the previous election five years ago.

The party has been tarnished by widespread corruption scandals and a national unemployment rate of 27% that has left many voters disillusioned. President Cyril Ramaphosa, head of the ANC, has campaigned on promises to clean up the rot in his party, an acknowledgment of the problems that forced his predecessor, Jacob Zuma, to resign last year. 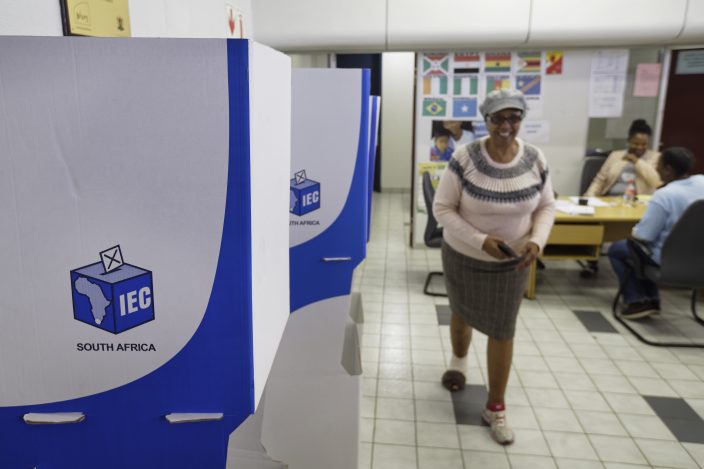 An electoral worker walks past polling booths readied ahead of Wednesday's election, at a polling station in downtown Johannesburg, South Africa Tuesday, May 7, 2019. The upcoming elections will take place 25 years after the end of apartheid and are the country's sixth all-race polls. (AP PhotoBen Curtis)

The ANC also has vowed to embark on a program of seizing white-owned land without compensation, and for this it needs a 67% majority to change South Africa's constitution. In the most likely scenario, the ANC will need to form a coalition government with another party to get the votes needed to alter the constitution. That is likely to be the Economic Freedom Fighters, a populist, left-wing party that also supports land seizures.

If the ANC's share of the vote slips below 60%, Ramaphosa could be vulnerable and his party could oust him and choose a new leader.

The largest opposition party, the Democratic Alliance, has campaigned vigorously against corruption but its support among the black majority is limited because it is perceived as a white-run party. More than 40 smaller parties also are vying for power in the balloting. 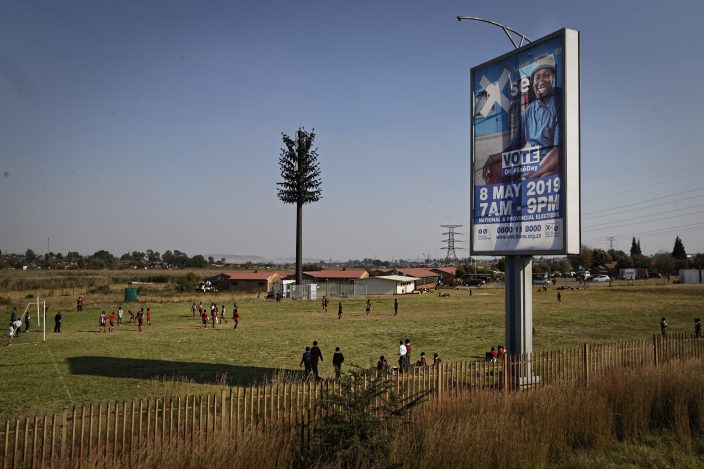 Schoolchildren play football in the afternoon next to a billboard from the Independent Electoral Commission of South Africa (IEC) encouraging people to vote, in Soweto, Johannesburg, South Africa Tuesday, May 7, 2019. The upcoming elections on Wednesday will take place 25 years after the end of apartheid and are the country's sixth all-race polls. (AP PhotoBen Curtis)

"It's an important election for South Africa, because the country is looking for someone to lead us out of this mess," said Barney Mthombothi, a political commentator, referring to the scandals and economic doldrums.

"But there is not a lot of excitement. People no longer have faith in the ANC," he said. "Many people I've spoken to are still not sure who they will vote for. People are going to the polls with a shrug of their shoulders."

The country's young voters, who make up about 20 percent of the electorate, largely support the EFF, which is led by charismatic firebrand Julius Malema, who broke from the ANC six years ago. 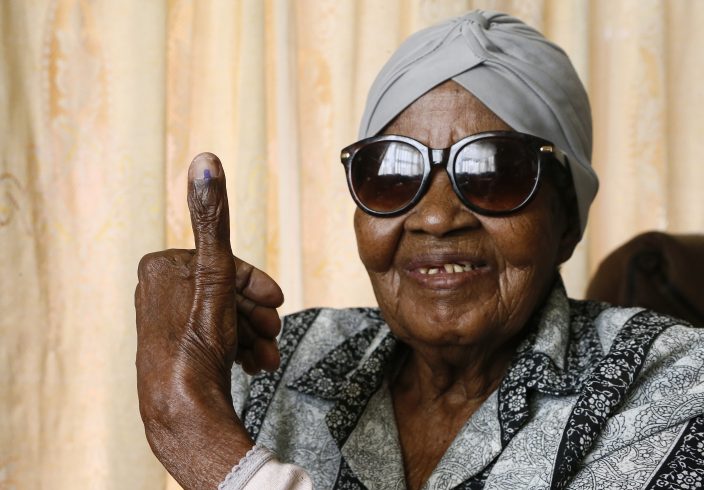 108-year-old MMaphuti Mabitsela shows her marked thumb nail after casting her special vote, at her home in Atteridgeville, near Pretoria, South Africa on Monday May 6, 2019. Mabitsela took part in South Africa's special voting for the elderly and infirm where electoral officials go to their homes or care facilities before the actual voting day of May 8. (AP PhotoPhill Magakoe)

"The ANC is being eaten from the left and from the right," Mthombothi said, referring to the challenge Ramaphosa's party faces from the EFF and the DA. "The EFF appeals to the young and they are enthusiastic. It is the older voters who are not excited about any of the main three parties."

Neither the president nor the parliament is elected directly. Voters cast ballots for a national party and the number of votes won by each party determines how many representatives are sent to the legislature. The president is the leader of the party that gets the most votes. 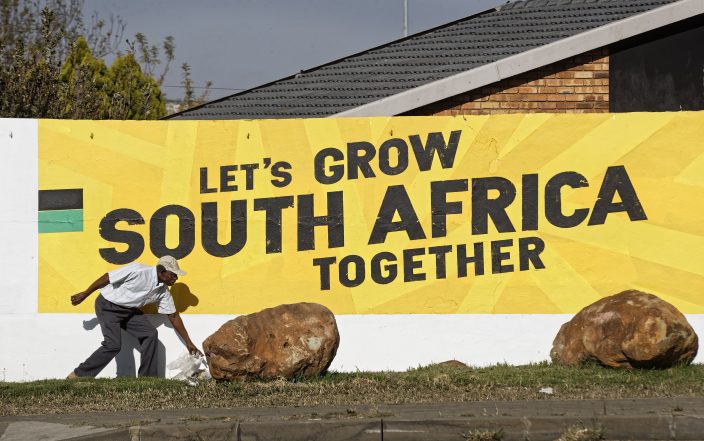 The owner of a wall on which an election mural for the ruling African National Congress (ANC) party is painted, who said he does not support the ANC but couldn't afford to turn down the money paid to him for the use of the wall, picks up trash outside his house in Johannesburg, South Africa, Monday, May 6, 2019. The upcoming elections on Wednesday will take place 25 years after the end of apartheid and are the country's sixth all-race polls. (AP PhotoBen Curtis)

The day is a national holiday to encourage turnout, and South Africa was famous for its long lines of voters in the first post-apartheid election 25 years ago. But a sense of national apathy this year could be an ominous sign for the ANC.

Preliminary results will be announced from the electoral commission in the capital, Pretoria, and final results are not expected for 48 hours.

In a column on the popular Eyewitness News website, commentator Mahlatse Mahlase offered tips for the many voters this year who are described as undecided or disillusioned.

"My advice to you is to undertake a process of elimination and to borrow from a certain political choice of words: Choose 'the better devil' of our time," she wrote. "They may all be deeply flawed. But there is surely someone you believe to be the 'least bad' of all? That should be your choice. Unlike marriage, in elections you have the option to opt out of your choice every five years."