Former President Jimmy Carter carved an unlikely path to the White House in 1976 and endured humbling defeat after one term. Now, six administrations later, the longest-living chief executive in American history is re-emerging from political obscurity at age 94 to win over his fellow Democrats once again.

A peanut farmer turned politician then worldwide humanitarian, Carter is carving out a unique role as several Democratic candidates look to his family-run campaign after the Watergate scandal as the roadmap for toppling President Donald Trump in 2020.

"Jimmy Carter is a decent, well-meaning person, someone who people are talking about again given the time that we are in," Minnesota Sen. Amy Klobuchar said in an interview. "He won because he worked so hard, and he had a message of truth and honesty. I think about him all the time." 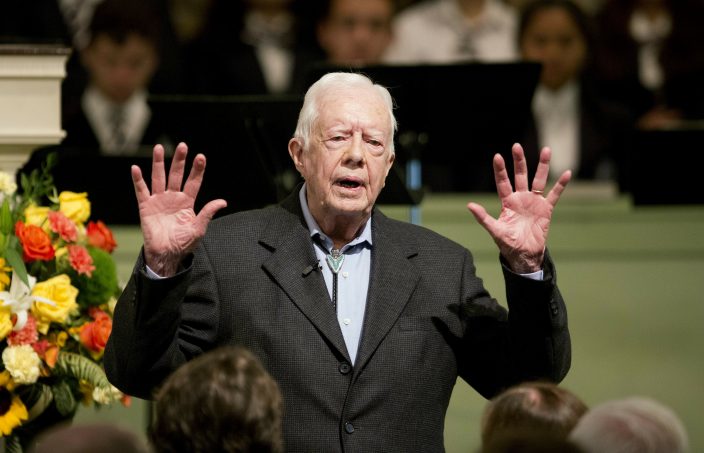 FILE - In this Sunday, Aug. 23, 2015 file photo, former President Jimmy Carter teaches Sunday School class at Maranatha Baptist Church in his hometown in Plains, Ga. Carter carved an unlikely path to the White House in 1976 and endured humbling defeat after one term. Now, six administrations later, the longest-living chief executive in American history is re-emerging from political obscurity at age 94 to win over his fellow Democrats once again. (AP PhotoDavid Goldman, File)

Klobuchar is one of at least three presidential hopefuls who've ventured to the tiny town of Plains, Georgia, to meet with Carter and his wife, Rosalynn, who is 91. New Jersey Sen. Cory Booker and Mayor Pete Buttigieg of South Bend, Indiana, also have visited with the Carters, including attending the former president's Sunday School lesson in Plains.

Carter had planned to teach at Maranatha Baptist Church again Sunday, but he is still recuperating at home days after being discharged from a Georgia hospital where he had hip replacement surgery following a fall as he was preparing for a turkey hunt.

"An extraordinary person," Buttigieg told reporters after meeting Carter. "A guiding light and inspiration," Booker said in a statement. Klobuchar has attended Carter's church lesson, as well, and says she emails with him occasionally. "He signs them 'JC,'" she said with a laugh. 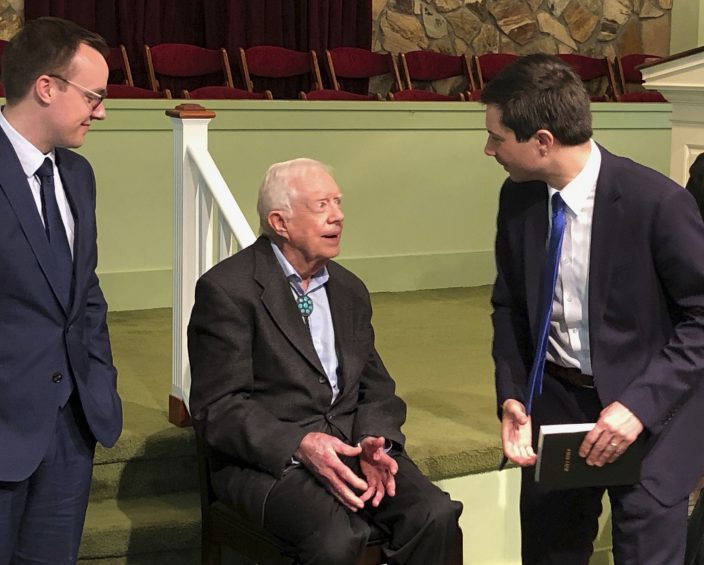 FILE - In this Sunday, May 5, 2019 file photo, Democratic presidential candidate Pete Buttigieg, right, and his husband, Chasten Glezman Buttigieg, left, speak with former President Jimmy Carter at Carter's Sunday school class in Plains, Ga. Carter has never been known as a key player in Democratic Party politics, but he's re-emerging in the 2020 is presidential race as some candidates go to Plains, Ga., to seek the 94-year-old's advice. (AP PhotoPaul Newberry, File)

It's quite a turnabout for a man who largely receded from party politics after his presidency, often without being missed by his party's leaders in Washington, where he was an outsider even as a White House resident.

To be sure, more 2020 candidates have quietly sought counsel from Trump's predecessor, former President Barack Obama. Several have talked with former President Bill Clinton, who left office in 2001. But those huddles have been more hush-hush, disclosed through aides dishing anonymously. Sessions with Carter, on the other hand, are trumpeted on social media and discussed freely, suggesting an appeal that Obama and Clinton may not have.

Unlike Clinton, impeached after an affair with a White House intern, Carter has no #MeToo demerits; he and Rosalynn, married since the end of World War II, didn't even like to dance with other people at state dinners. And unlike Obama, popular among Democrats but polarizing for conservatives and GOP-leaning independents, Carter is difficult to define by current political fault lines. 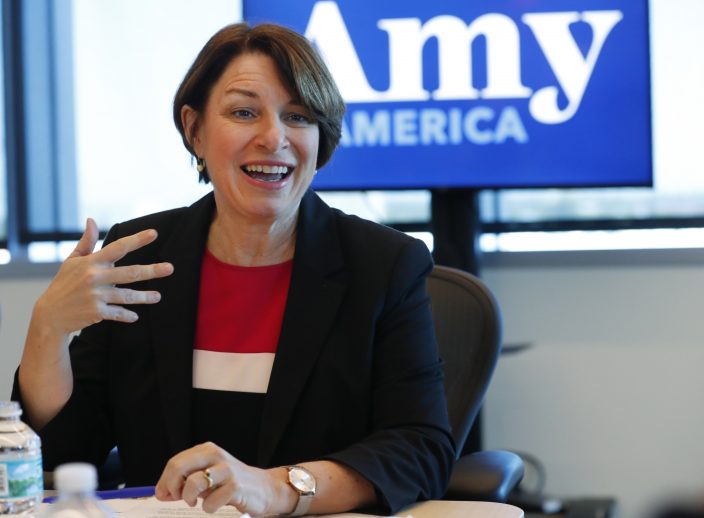 FILE - In this Tuesday, April 16, 2019 file photo, Democratic presidential candidate Amy Klobuchar speaks during a roundtable discussion on health care, in Miami. Former President Jimmy Carter has never been known as a key player in Democratic Party politics, but he’s re-emerging in the 2020 is presidential race as some candidates go to Plains, Ga., to seek the 94-year-old’s advice. Minnesota Sen. Klobuchar says Carter’s 1976 campaign after the Watergate scandal drove Richard Nixon from the Oval Office is relevant as Democrats take on President Donald Trump. (AP PhotoWilfredo Lee, File)

For years, Carter has irked the foreign policy establishment with forthright criticism of Israel and its treatment of Palestinians.

He confirms that he voted for Vermont Sen. Bernie Sanders, a democratic socialist, over Hillary Clinton in Georgia's 2016 presidential primary. In 2017, Carter welcomed Sanders, who's running again this year, to the Carter Center for a program in which the two men lambasted money in politics. Carter called the United States "an oligarchy." 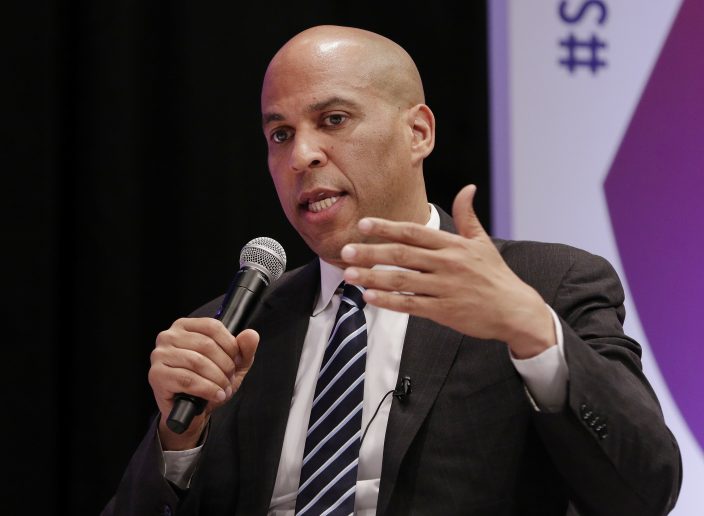 FILE - In this April 24, 2019 file photo, Democratic presidential candidate Sen. Cory Booker, D-N.J., answers questions during a presidential forum held by She The People on the Texas State University campus, in Houston. Former President Jimmy Carter has never been known as a key player in Democratic Party politics, but he’s re-emerging in the 2020 is presidential race as some candidates go to Plains, Ga., to seek the 94-year-old’s advice. Booker and Mayor Pete Buttigieg of South Bend, Ind., have visited with the Carters, including attending the former president’s Sunday School lesson in Plains. (AP PhotoMichael Wyke, File)

Yet Carter has since warned Democrats against "too liberal a program," lest they ensure Trump's re-election.

Klobuchar credited Carter with being "ahead of his time" on several issues, including the environment and climate change (he put solar panels on the White House), health care (a major step toward universal coverage failed mostly because party liberals though it didn't go far enough) and government streamlining (an effort that angered some Democrats at the time). But she also alluded to how his presidency ended: a landslide loss after gas lines, inflation-then-unemployment, and a 14-month-long hostage crisis in Iran. "Their administration was not perfect," she said.

It's enough of an enigma that Carter is the only living president not to draw Trump's ire or mockery, even if Republicans have lambasted Carter for decades as a liberal incompetent. Trump and Carter chatted by phone earlier this spring after Carter sent Trump a letter on China and trade. Both men said they had an amiable conversation.

"There was a feeling that people had been betrayed in our democracy by someone who wasn't telling the truth," she said, referring to President Richard Nixon's resignation in 1974.

Buttigieg said he and Carter "talked about being viewed as coming out of nowhere" and how Carter ran two general election campaign entirely on the public financing system that now sits unused as candidates collectively raise money into the billions.

Klobuchar recalled Carter telling her that "family members would disperse to different states and then they would all come back on Friday, go back through the questions they had gotten." Then "he would talk about how he would answer them" so they'd all be prepared on their next trips, she said.

It was "a different era," Klobuchar added, recalling that Carter said he felt "hi-tech because they had a fax machine on his plane." Indeed, Klobuchar, born in 1960, wasn't old enough to vote for Carter until he sought a second term. Booker, 50, recalls voting for Carter, but in a grade-school mock election. Buttigieg, 37, wasn't even born when Carter left office.

Nonetheless, Klobuchar said she regularly meets Iowans who remember Carter and his family members campaigning in 1975 before his rivals and national media recognized his strength, and she said she sometimes references on the campaign trail how her fellow Minnesotan and Carter's vice president, Walter Mondale, remembers their term: "We obeyed the law. We told the truth. We kept the peace."

Whatever the reasons for the renewed attention, Carter allies say they hope the 2020 campaign is part of bolstering his reputation as a president.

"People are tired of hearing that he was a better ex-president than president," said DuBose Porter, a former Georgia Democratic chairman who has known the Carters for decades. "Of course he's done amazing things at the Carter Center, but he did great things for the country, and we're proud of it."

No shortage of points scored inside the NBA's bubb ...

The last time there was a slate of ...