The Montreal bike festival at the end of this month marks an unofficial start to the bicycling season in Quebec, a leading world destination for cyclists.

Why so popular? It's because of Route Verte, a sprawling network of trails and bike friendly-byways that offers more than 3,300 miles or 5,300 kilometers of cycling in verdant lands.

And the network, nearly a quarter century old, is about to get another growth spurt. Quebec is adding some 560 miles or 900 kilometers to Route Verte. 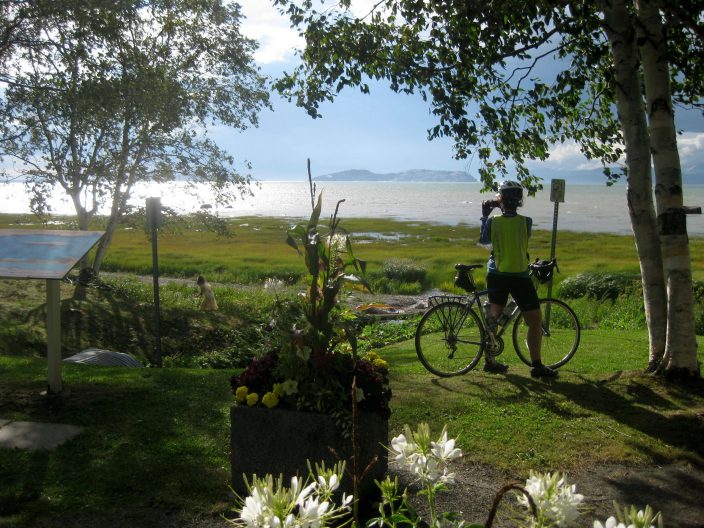 A cyclist takes in the St. Lawrence vista at Notre-Dame-du-Portage, Quebec, on Aug. 12, 2015. Along the south shore of the St. Lawrence River in this area of around Kamouraska, the panorama of river, sky, flowers and gardens defines the magic of bicycling the Route Verte network in Quebec. (AP PhotoCal Woodward)

In Montreal, a festive night ride on May 31 typically draws 10,000 cyclists. On Sunday, June 2, the Velo Quebec organization puts on its iconic tour of the city-island, with 25,000 taking part in the family-friendly tour and thousands more cheering them on.

For more, check out The Associated Press' travel podcast, "Get Outta Here ." 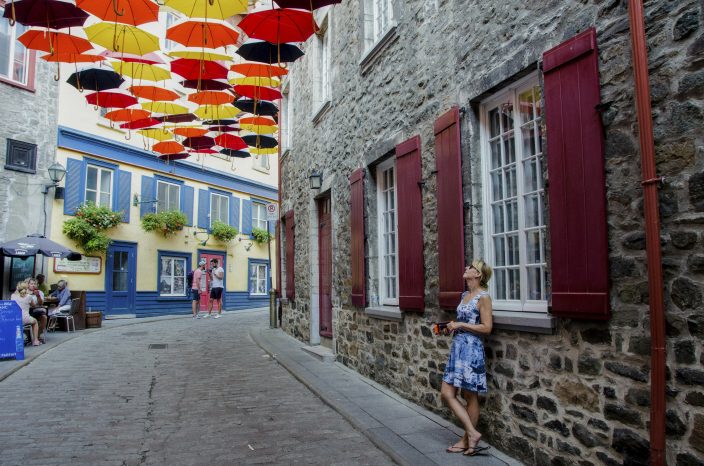 Paule Bergeron takes in the scene in Place-Royale in Old Quebec, Aug. 27, 2018. Quebec City offers compelling urban bike routes along the river, out to Montmorency Falls and through intriguing neighborhoods, as well as access to the Jacques-Cartier rail trail running through forest, farmland and meadows. (AP PhotoCal Woodward) 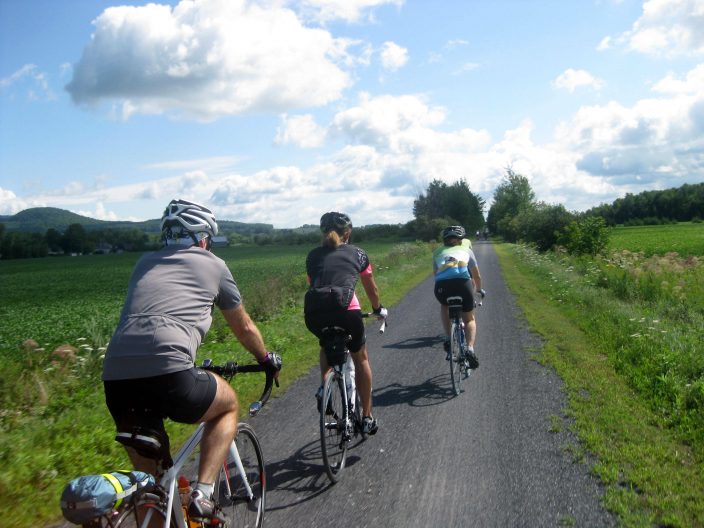 Cyclists on Velo Quebec's Grand Tour sweep along a trail in the Eastern Townships, Aug. 1, 2015. More than 1,200 cyclists took part in the ride, which dipped into Vermont. This year's Grand Tour is in the Saguenay-Lac Saint-Jean region. Velo Quebec is steward of Route Verte, a vast network of bicycle routes that has made Quebec a leading destination for cyclists. (AP PhotoCal Woodward) 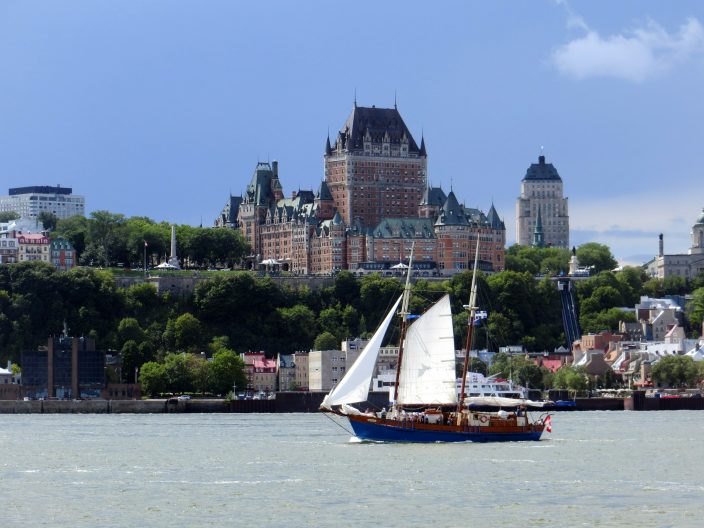 Quebec City's iconic Fairmont Le Chateau Frontenac dominates the city skyline from the ferry crossing the St. Lawrence River, Aug. 15, 2015. Riverfront bicycle trails on both sides offer easy cycling and striking views, while the Jacques-Cartier trail outside the city runs more than 80 kilometers or 50 miles through forest and meadows with several towns along the way. (AP PhotoCal Woodward) 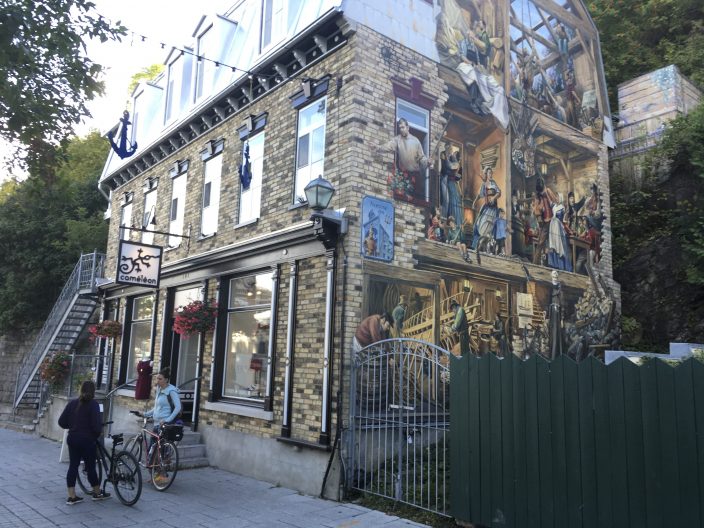 Cyclists chat beside a historical fresco in Old Quebec, Aug. 31, 2017. Nearby, the Promenade Samuel de Champlain path takes cyclists along the St. Lawrence River, past outdoor works of art and the lively waterfront, connecting them with a path across the river via the ferry or bridge. (AP PhotoCal Woodward) 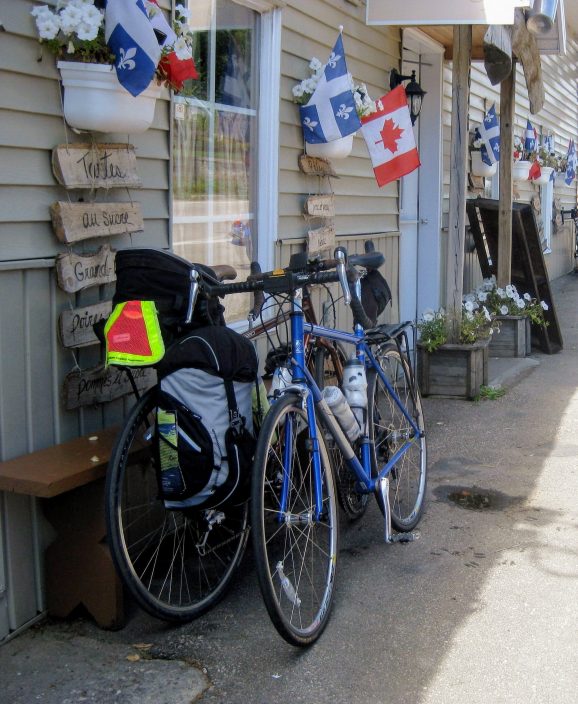 In this Aug. 7, 2015, photo, Quebec and Canadian flags greet visitors at a shop on Isle-aux-Coudres, where a road circling the island shore provides a perfect loop for lovers of quiet roads, gentle hills, flats along the water and eye-candy vistas of mountains you don't have to climb. A free, 15-minute car ferry gets you to the island from Quebec's Charlevoix mainland. (AP PhotoCal Woodward) 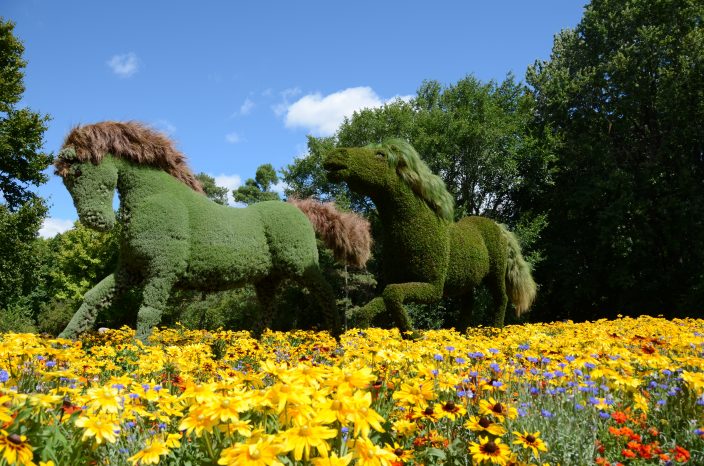 Towering equine topiaries dominate a carpet of flowers at the Montreal Botanical Garden, Aug. 10, 2013. Montreal is a hotbed of bicycling, offering a bike festival that draws some 25,000 cyclists on a June 2 ride along with access to long-distance touring routes and the nearby rail trail, P'tit Train du Nord. (AP PhotoCal Woodward) 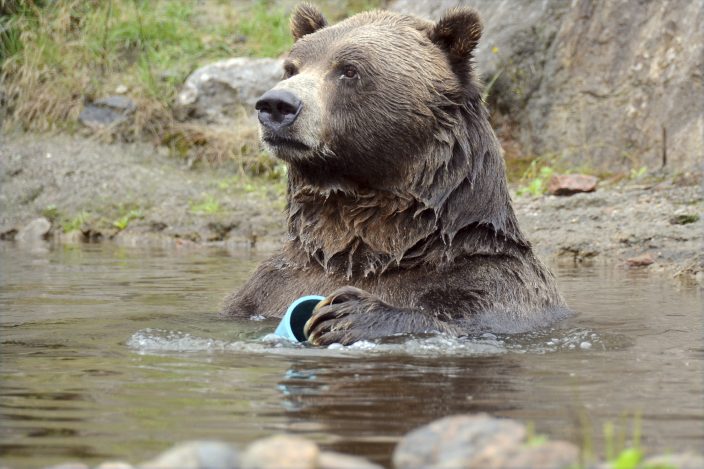 A bear takes a dip with a toy at Zoo Sauvage in Saint-Felicien, Quebec, Aug. 14, 2014. The zoo, notable for the wide open spaces turned over to its animals, is a favorite stop for cyclists circling Lac-Saint-Jean on Veloroute des Bleuets, the Blueberry Trail. The trail is part of Quebec’s Route Verte, a network of off-road paths and bike-friendly byways that stitches together wild places, pristine villages and a few buzzy cities in a French-flavored tableaux. (AP PhotoCal Woodward) 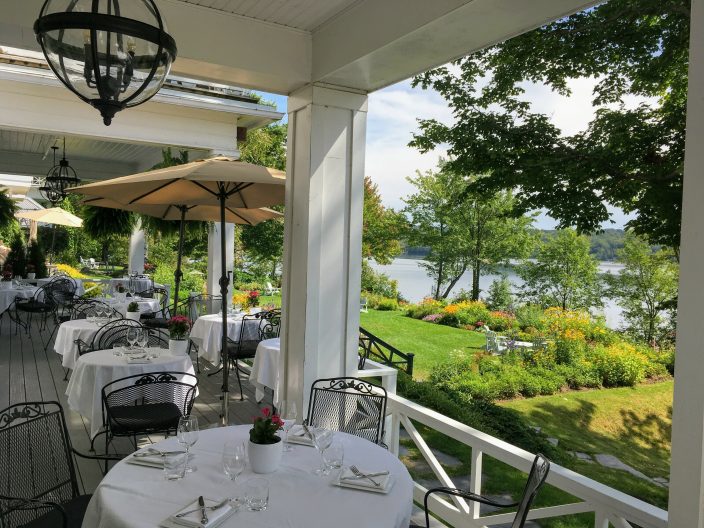 A view of the grounds at Manoir Hovey, outside North Hatley, Quebec, in the Eastern Townships, Aug. 30, 2017. Bill and Hillary Clinton vacationed with the Canadian mystery novelist Louise Penny at the inn along Lac Massawippi that summer. The Eastern Townships are laced with bicycle routes that make it a prime destination for cyclists sampling the Route Verte network of trails and byways. (AP PhotoCal Woodward) 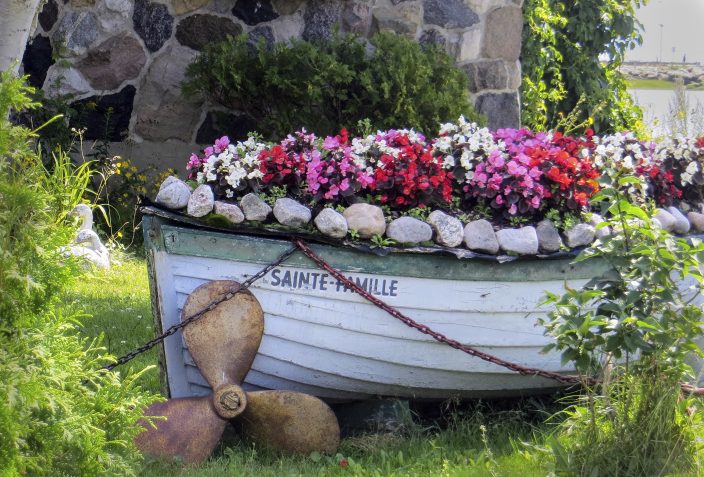 Quebec in summer is a place of wildflowers, garden flowers and sometimes flowers in a boat, as seen in this Aug. 7, 2015, photo from Isle-aux-Coudres. A quiet road circling the island looks out on the mountains of Quebec's Charlevoix region and the broad St. Lawrence River, and can be accessed by a free car ferry. (AP Photo, R.M. Green) 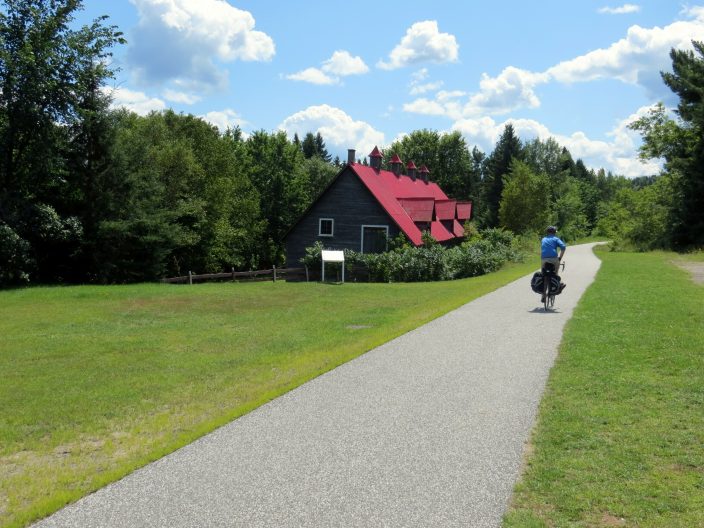 A cyclist pedals on P'tit Train du Nord, a rail trail running through Quebec's Laurentian region outside Montreal, Aug. 11, 2013. The "little train of the north" trail offers well-spaced amenities, intriguing inns and a shuttle service to drop cyclists and their bikes at the northern end or places along the way. It's part of Quebec's vast Route Verte cycling network. (AP PhotoR.M. Green) 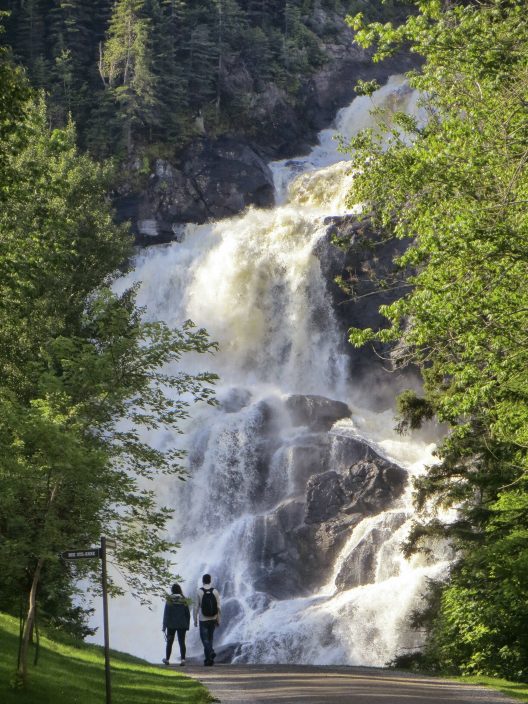 Visitors to Val-Jalbert, a re-created paper mill town from the 1920s along Lac-Saint-Jean, are dwarfed by the roaring Ouiatchouan waterfall, which once powered the mill. The spectacle dominates the town, both by day when visitors can stroll the streets, and by night when the waterfall is dramatically bathed in lights of changing colors and the town is reserved for guests who stay there. It's a popular stop for cyclists on the Blueberry Trail around Quebec's Lac-Saint-Jean. (AP PhotoR.M. Green)