It's pretty clear after watching the new live-action "Aladdin" that doubts about Will Smith's casting as the Genie are overblown. It's the guy behind the camera who should be doubted. And stuffed into a small lamp forever.

Guy Ritchie — that lover of gritty gangsters and violent action — was always an odd choice to helm a big Disney romantic musical and proves utterly the wrong guy here. "Aladdin ," in his hands, is more like "The Mummy" than "Frozen." This is an "Aladdin" with a torture scene and pointlessly artful fast-slow-motion action scenes.

Going into it, Smith was the question mark. How can you possibly have a real actor play the shape-shifting, manic spirit that Robin Williams so wonderfully voiced in the animated film? Smith struggles at first before perhaps listening to his own character's advice: Be yourself. 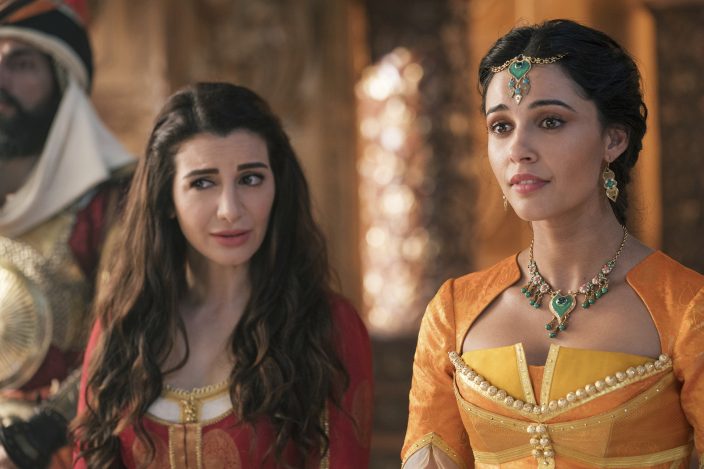 This image released by Disney shows Nasim Pedrad as Dalia, left, and Naomi Scott as Jasmine in Disney's live-action adaptation of the 1992 animated classic "Aladdin." (Daniel SmithDisney via AP)

Ritchie, who directs and is a co-screenwriter alongside John August, has basically taken the 1992 film's structure, added elements from the Broadway musical and made some nice script tweaks, most impressively by adding a second love story and updating Princess Jasmine from pretty eyewitness to fierce participant. The script also doubles down on the notion that everyone seems trapped in roles they are born into.

Mena Massoud gamely plays the title character, a street urchin with good hair who falls for the free-spirited princess and has his life changed with one rub of a magic lamp. Naomi Scott is the princess and she is a worthy Disney heroine for 2019 — funny, strong, brave and with a sinfully good voice.

The key Alan Menken melodies from the original film — including "Friend Like Me," ?Prince Ali" and "A Whole New World" — are all here, as well as "Speechless," a new song written by Menken and Benj Pasek and Justin Paul ("La La Land"), performed by Jasmine. It's terrific and may finally replace "Let It Go" as the go-to Disney anthem. 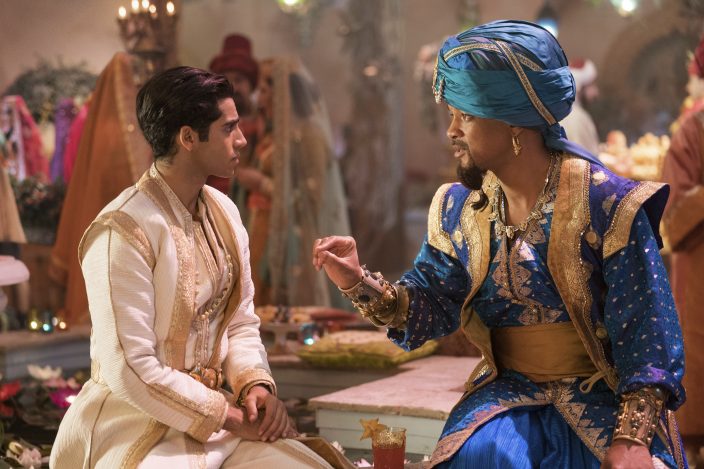 This image released by Disney shows Mena Massoud as Aladdin, left, and Will Smith as Genie in Disney's live-action adaptation of the 1992 animated classic "Aladdin." (Daniel SmithDisney via AP)

The film's other highlights are Michael Wilkinson's lush costumes, a parade of entirely digital animals — including the fantastically realized Abu the monkey, Rajah the tiger and a hugging magic Carpet — and breakout performances from "Saturday Night Live" alum Nasim Pedrad as a handmaiden and Billy Magnussen as a prince. Choreographer Jamal Sims combines hip-hop and Bollywood in glorious mashups.

But the production design by Gemma Jackson is pure Middle Eastern-South Asian kitsch — complete with the expected food stalls, crumbling walls and constant bustle. (Let's face it, all vaguely Middle Eastern urban scenes haven't changed much since "Raiders of the Lost Ark".) And a real stumble is made in the Cave of Wonders, which is horribly under-realized — it looks like a cat threw up gold coins and rubies.

Marwan Kenzari is a younger Jafar than we are used to but he's evidently been told to go full-psychotic by the end, including screaming like he's in "The Wrath of Khan" as thunder roars and his eyes bulge. Even so, he now has a backstory and some nice lines, including "Steal an apple, you're a thief. Steal a kingdom, you're a statesman." 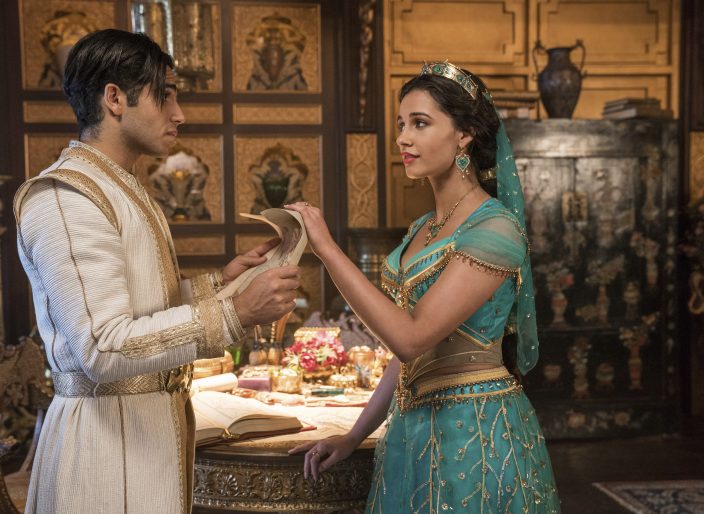 This image released by Disney shows Mena Massoud as Aladdin, left, and Naomi Scott as Jasmine in Disney's live-action adaptation of the 1992 animated classic "Aladdin." (Daniel SmithDisney via AP)

Smith's Genie is a martini-drinking, yoga-posing, needy showoff with a top knot and an armful of popular culture references ("The crowd goes wild!" he says). When he's blue, he's purely a visual effect and trying too hard to be the late Robin Williams. When he's normal, he's Smith — and better. A scene in which the Genie tries to help the tongue-tied Aladdin at court is Smith at his funniest in years.

But everywhere else you feel a restless Ritchie. He has fallen in love with making things explode in a burst of sand. He breaks the fourth wall in one moment and never returns. He creates an abrupt, out-of-left-field fantasy sequence for "Speechless" and never repeats it. He is very good at action — and even mocks the art form when he makes a pile of spice shudder as something massive approaches, like in "Jurassic Park" — but can't decide on a consistent visual style. He seems bored by quiet moments. Even his romantic "A Whole New World" carpet ride — a slam dunk for any filmmaker — is made somehow harrowing.

The film's lurch from one direction to the next is capped off by a disastrous remix of "Friend Like Me" that plays over the end credits, with Smith resurrecting his '90s friendly rapper while DJ Khaled keeps screaming "Another one!" Again, Menken, Pasek and Paul — some of our greatest theatrical songwriters — are on deck here. It's the last of many clumsy touches, but not in a charming way. 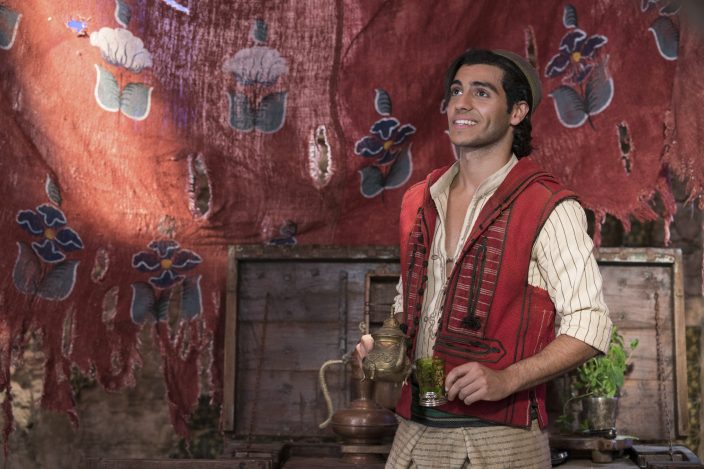 This image released by Disney shows Mena Massoud as Aladdin in Disney's live-action adaptation of the 1992 animated classic "Aladdin." (Daniel SmithDisney via AP)

"Aladdin," a Disney release, is rated PG for "some action/peril." Running time: 128 minutes. Two stars out of four.