U.S. rapper A$AP Rocky should be held for another week in pre-trial detention to allow police to finish investigating a June 30 fight in downtown Stockholm, a prosecutor said Friday.

Suneson said police "have worked intensively" with the preliminary investigation but need more time to complete their probe. 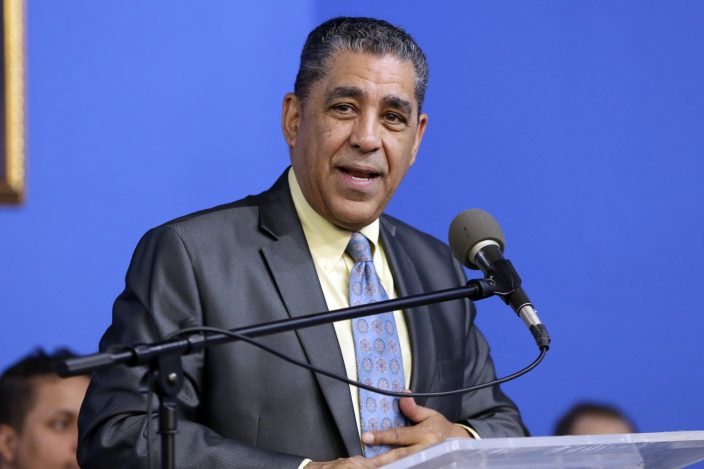 FILE - This Jan. 15, 2018 file photo shows U.S. Rep. Adriano Espaillat, D-N.Y. speaking at the National Action Network House of Justice, in New York. Espaillat is pushing for the release of A$AP Rocky, who has been behind bars in Sweden while police investigate a fight involving the rapper on June 30, 2019. (AP PhotoRichard Drew, File)

On June 5, Mayers who was in Sweden to perform at a music festival, and his body guards were ordered held for two weeks after being detained two days earlier. Videos published on social media, show a person being violently thrown onto the ground by Mayers. It was not clear who else was involved. A defense lawyer has said it was self-defense.

The platinum-selling, Grammy-nominated artist has seen many celebrities such as Justin Bieber and Shawn Mendes come to his support since his arrest.

Soon after the news of his arrest broke, the movement #JusticeForRocky pushed for the rapper's release. A petition calling for his release has also garnered half a million signatures. And Adriano Espaillat, a New York Democrat in the House of Representatives, is pushing for the release of the rapper, who was born in the Harlem borough of New York City.

"Everyone deserves to be treated equally and A$AP Rocky's rights continue to be violated. It is not a fair process," the congressman earlier said in a statement to The Associated Press.

Espaillat said he has been in contact with the State Department and the U.S. Embassy in Sweden and wants everyone to continue showing their support to help us in this process of getting justice for Rocky."

Virus closes doors at Armani, but other Milan shows go ...

A$AP Rocky to perform in Stockholm months after conviction