Pam Grier's role as the owner of a hardware store in rural Nebraska in the ABC sitcom "Bless This Mess" isn't a complete departure for the film legend: She lives in rural Colorado and has spent much of her life on ranches to find serenity from Hollywood life.

"I commuted to work really for 50 years because I couldn't have that lifestyle that I wanted of horses and ruralness. It would always be the city, hotels, room service," said Grier in a recent interview.

"My grandfather was the first feminist in my life, from Wyoming, who taught all of us girls how to hunt, fish and shoot, so I could bring that to this show, every element and it just kind of fit," Grier said. "He had this glow this piece and this unbelievable calm about him during the day after working sun up, sundown doing some labor. And he just was so spiritual and enjoyed life and he would always say you know if you wake up breathing you're going to have a good day. And so that's been my mantra since I was a little girl." This May 21, 2019 photo shows actress Pam Grier posing in New York to promote her ABC sitcom “Bless This Mess.” (Photo by Christopher SmithInvisionAP)

She credits that mantra for helping her thrive in her 70th year in a life filled with plenty of highs and lows. Grier made her name as the queen of Blaxploitation films in the 1970s with roles in classics like "Coffy" and "Foxy Brown," but struggled in Hollywood after the genre fell out fashion. She also had tumultuous romances with the likes of Richard Pryor and Freddie Prinze.

The second season of "Bless This Mess' launches in September.

Grier also was the victim of two sexual assaults — one when she was just 6 years old. She opened up about her personal struggles in her 2010 memoir, "Foxy: My Life in Three Acts," and while promoting the book, learned a lot about the wide range of people who have been victims of sexual assault, including men: "I was surprised at the book signings how many men came up and just let me know that they feel better by me talking." 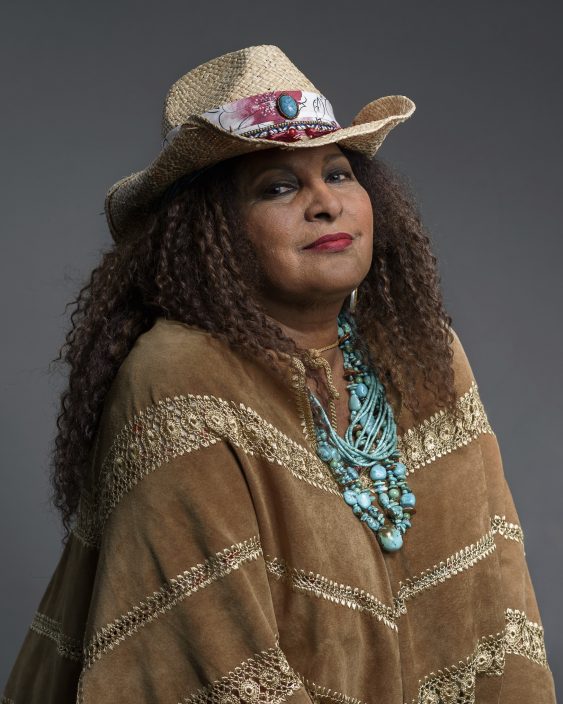 This May 21, 2019 photo shows actress Pam Grier posing in New York to promote her ABC sitcom “Bless This Mess.” (Photo by Christopher SmithInvisionAP)

Grier said she's gratified that many more of her fellow actresses are talking about their experiences with abuse in Hollywood in the era of #MeToo and Time's Up. She marvels in the impact the movement has had in a relatively short period of time.

"I always say it's about time. It takes confidence. It takes other people around you to set an example that you won't inflame or flame out you - you'll be OK. And it is tough to talk about it," she said." A lot of people haven't healed yet."

Grier has also successfully battled cancer. While she's still a glamour queen and sex symbol, her experience with the disease has made her eschew at least one of society's beauty norms.

"I'm so proud of my hair growing back on my legs after cancer that I don't shave. I don't shave my legs. I enjoy looking at you know two and half inches of hair and my legs," she said. "I'm very grateful to have a healthy balance. ... Oh, and I don't feel any different than I did when I was 21!"