So now we know.

Tiger Woods isn't done, no matter what it looked like on his slog through the only two rounds he'll play in this British Open. He's also not in danger of being put in traction anytime soon, no matter how many times he is asked about his surgically repaired back.

He's just not 23 anymore. And that may be the worst part of being a superstar in any sport. 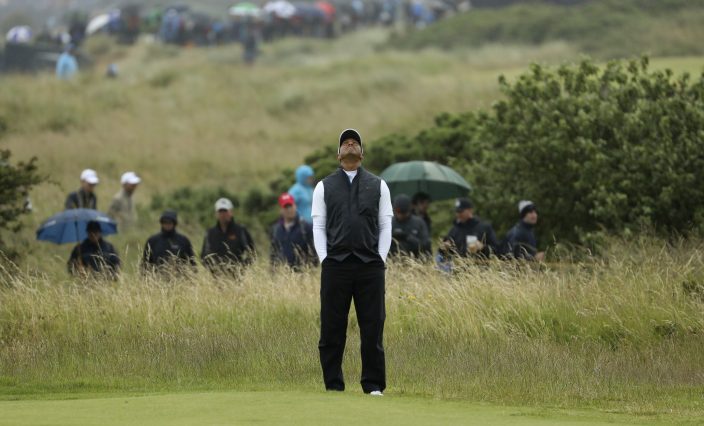 Tiger Woods of the United States looks skyward as he wait to play on the 17th green during the second round of the British Open Golf Championships at Royal Portrush in Northern Ireland, Friday, July 19, 2019.(AP PhotoPeter Morrison)

Woods admitted as much Friday, just before catching his jet home to Florida. If there's an upside to missing the cut at Royal Portrush, he said, it's that he'll get a chance to sleep in his own bed once again.

Meet the new Tiger. Not the same as the old Tiger.

"Things are different," Woods said. "I'm going to have my hot weeks. I'm going to be there in contention with a chance to win, and I will win tournaments. But there are times when I'm just not going to be there. And that wasn't the case 20-some-odd years ago." 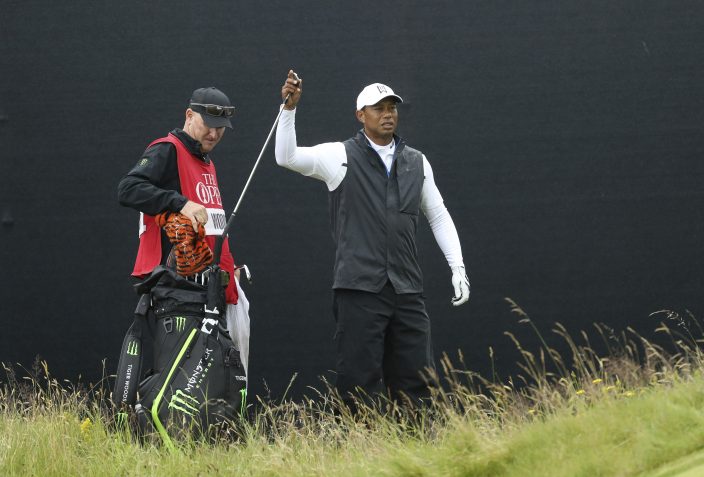 Tiger Woods of the United States get his club out of his bag on the 17th green during the second round of the British Open Golf Championships at Royal Portrush in Northern Ireland, Friday, July 19, 2019.(AP PhotoPeter Morrison)

Coming to grips with age, of course, is something every athlete struggles with. Woods is no exception, though his rabid fans somehow think he's exempt from the realities that mere mortals face.

And, really, who can blame them. A magical win at this year's Masters after going 11 years without winning a major not only added to the Woods legend but left his fans wanting even more.

One look at Woods joylessly plodding his way around Royal Portrush on Friday, though, and it's apparent that he's not only human after all — but an aging human at that. 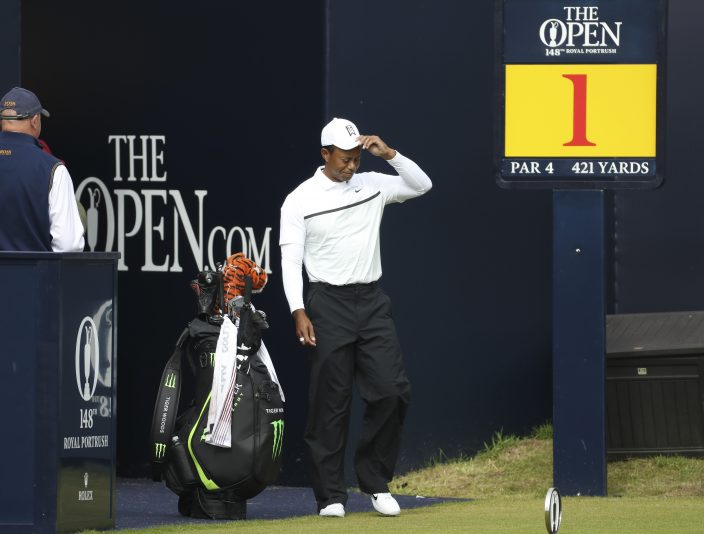 Tiger Woods of the United States walks onto the 1st tee during the second round of the British Open Golf Championships at Royal Portrush in Northern Ireland, Friday, July 19, 2019.(AP PhotoPeter Morrison)

He'll be 44 by the time he returns to Augusta National to defend his green jacket, with the aches and pains of anyone that age exacerbated by the amount of times he has swung golf clubs in his life and the four back surgeries that resulted from it. The shots that used to come easy don't always come when he commands them now, and the concentration he needs standing over 5-footers isn't always there either.

He's not done, and to suggest so would be silly. His play on the back nine on Sunday at the Masters was textbook precision, and winning the green jacket for a fifth time was almost as remarkable as Jack Nicklaus winning at the age of 46 back in 1986.

He will, as he says, likely win again, and it may not be long before that happens. Woods said he's primed to play in the FedEx Cup playoffs after taking a few weeks off to recharge.

There's even an outside chance he could catch Nicklaus with 18 majors — he needs just three more — though with each passing poor performance that seems unlikely.

Accepting that takes some time. But Woods seems to finally understand it.

"It's just a matter of being consistent," Woods said. "That's one of the hardest things to accept as an older athlete is that you're not going to be as consistent as you were at 23."

A quick look at the results backs that up. Woods seemed to come to this Open with low expectations, and with good reason. He hasn't played competitively since the U.S. Open and was coming off a vacation in Thailand.

But in the three majors since his Masters win, he's only played on the weekend once. That was at the U.S. Open at Pebble Beach, where he wasn't a factor.

He's now missed the cut in just 10 majors in 23 years as a pro. Seven of those missed cuts came in his last 13 major championships.

"It's more frustrating than anything else because this is a major championship and I love playing in these events," Woods said. "I love the atmosphere. I love just the stress of playing in a major. And unfortunately, I've only had a chance to win one of them and was able to do it. But the other three I didn't do very well."

At this Open he didn't do well at all. Woods blew up in the rain on the front nine Thursday on his way to a 78, and the 70 that he shot in his second round was, at best, ordinary.

That showed in one last slash out of the rough in the rain on 18, then a putt from off the green that got only halfway there. His mood seemed about as bright as the day, though when he stepped out of the rain to answer a few questions from the media he put on a happy face.

There were more questions about the back, though Woods has not said anything specifically all week about any back pain.

No, he's not moving as well as he used to, Woods said after Round 1. He's sore after playing golf in the cold and rain.

And the last major of the decade was yet another reminder that he's not 23 anymore.

Study on safety of malaria drugs for coronavirus retrac ...