Renaissance or ruin? Americans are being presented with two starkly different accounts of the state of the auto industry, one from President Donald Trump and the other from California Sen. Kamala Harris, a Democratic presidential candidate. Neither is accurate.

Trump claims to be a one-man spark for the enormous industry, which grew steadily and achieved record sales under President Barack Obama after its near collapse. Harris raises the apocalyptic risk of three in four autoworkers losing their jobs this year, which is not at all in the cards.

In reality, the auto industry has grown under two presidents and still posts strong numbers despite facing a leveling off in demand. 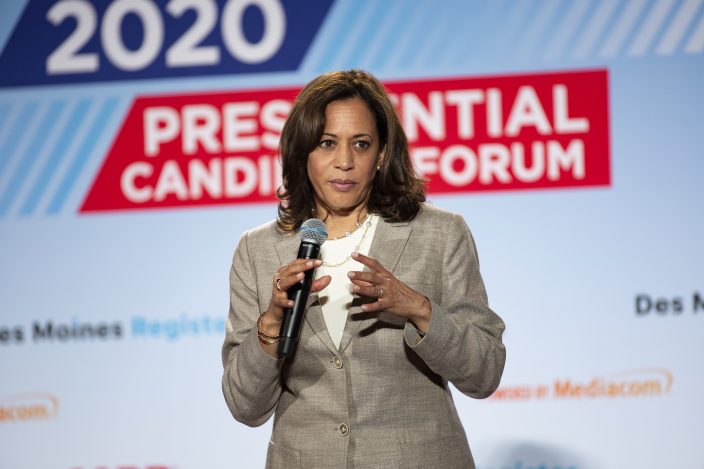 A look at their claims:

TRUMP: "They're coming in at a level that we haven't seen for decades. Car companies are coming in — Japanese car companies, in particular. Although, Germany called to say that they're going to be announcing some very big movement with respect to a certain company that I've demanded has to come, because they sell us a lot of cars but they make them in other places. We want them making them in the United States. But Japan has 12 different companies building plants in Michigan, in Ohio, in North Carolina, in Pennsylvania. One is going to be announced in Florida. We are doing things that nobody thought were possible." — Cabinet meeting Tuesday.

THE FACTS: There's no evidence that car companies are coming to the U.S. at a rate faster than in previous decades, and industry observers know of only a few Japanese automotive companies building or expanding factories in Michigan, Ohio, North Carolina or Pennsylvania — nowhere near a dozen. All four are key states for Trump's 2020 re-election campaign.

In Ohio, Honda has filed paperwork for a small expansion of its engine plant in Anna, Ohio, near Dayton, but also has announced production cuts without layoffs. A parts supplier announced plans last year to expand in Springfield, Ohio. In North Carolina, transmission maker Aisin in April announced plans to bolster manufacturing operations with 900 jobs by 2021, but gave few details.

The only Japanese automakers building a new U.S. assembly plant are Toyota and Mazda, which are jointly constructing a factory in Alabama that will build SUVs. At least three parts companies have announced plans to build factories in Alabama to serve that facility.

The White House didn't respond when asked to identify the 12 Japanese companies claimed to be building new factories.

In past decades, foreign automakers have made substantial investments in U.S. factories including Toyota, BMW, Honda, Hyundai, Mercedes-Benz and Volkswagen.

Trump's frequent claim, repeated this week during a made-in-the-USA event, that "we hadn't had auto plants built in many, many years" is false.

Government statistics show that jobs in auto and parts manufacturing grew at a slower rate in the two-plus years since Trump took office than in the two prior years.

Between January 2017, when Trump was inaugurated, and June of this year, the latest figures available, U.S. auto and parts makers added 41,900 jobs, or a 4.4% increase, according to the Bureau of Labor Statistics. But in the two years before Trump took office, the industry added 63,600 manufacturing jobs, a 7.1% increase.

HARRIS: "Some estimate that as many as 700,000 autoworkers are going to lose their job before the end of the year." — remarks in July 12 radio interview.

THE FACTS: No one is predicting that a majority of the nation's nearly 1 million autoworkers will be unemployed by year's end.

As she has before, Harris made the claim about potentially catastrophic layoffs based on a July 2018 study done by the Center for Automotive Research. She did not summarize its findings accurately. The study is also outdated.

The study laid out a variety of scenarios for potential job losses across all U.S. industries touched by the auto business — not just autoworkers — if a number of new tariffs and policies that Trump has threatened were enacted. The study gave a wide range of possible job losses, from 82,000 to a worst-case situation of 750,000. Those hypothetical job losses would be spread across car and parts makers, dealers, restaurants, retail stores and any business that benefits from the auto industry.

The Center for Automotive Research revised its study in February to a worst-case scenario of 367,000 job losses across all industries by the end of this year. The Trump administration in May also lifted tariffs on steel and aluminum products coming from Canada and Mexico, further minimizing the impact on the auto industry.

Overall, the auto industry has climbed back since the crisis in 2009 that sent General Motors and Chrysler into bankruptcy protection. Thousands of jobs have been added, and sales hit a record 17.55 million in 2016. Since then, demand has fallen, with about 16.8 million in new-vehicle sales expected this year.

Automakers won't need additional factory capacity in a declining market. But the industry is still posting strong numbers and is not heading off a cliff.

The cheers of celebration have fad ...