Republicans frustrated by losing their grip on political power in some Western states have begun deploying a new weapon: the recall.

Once reserved for targeting corrupt or inept elected officials, the recall has become part of the toolkit for Republicans seeking a do-over of election results. One GOP strategist in Colorado has put a name to it — "recall season."

To be sure, Democrats also have used recalls, most notably in Wisconsin, where they tried unsuccessfully to oust then-Republican Gov. Scott Walker in 2012 over his actions to weaken public sector unions. 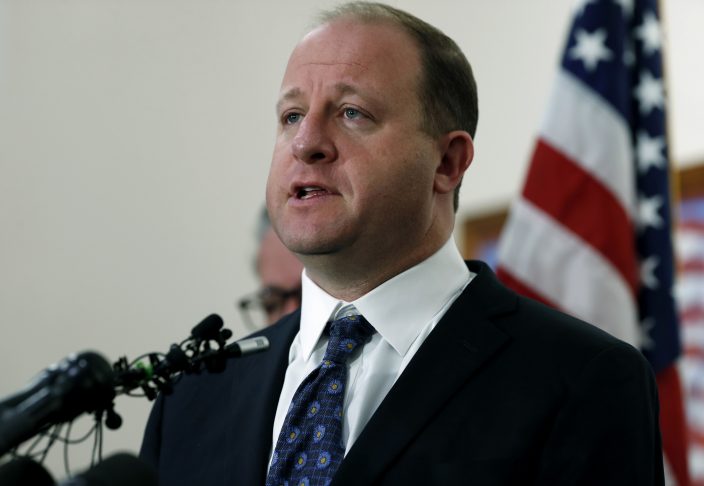 FILE - In this May 8, 2019, file photo, Colorado Gov. Jared Polis responds to a question about a shooting at a charter school during a news conference in Highlands Ranch, Colo. Colorado Republicans who were trounced in the November 2018 elections are using the recall process to try to reclaim seats and some political power. Gov. Polis, who defeated his opponent by 11 percentage points, is one target. (AP PhotoDavid Zalubowski, File)

But Republicans have been mounting recall efforts against Democratic state lawmakers and governors at an unprecedented rate over the past two years in a handful of Western states, at the same time their political fortunes in those states have been declining.

In 2018, they recalled a freshman state senator in California as a way to temporarily undo a Democratic supermajority.

That same year in Nevada, two Democratic lawmakers and an allied independent fended off recall attempts. 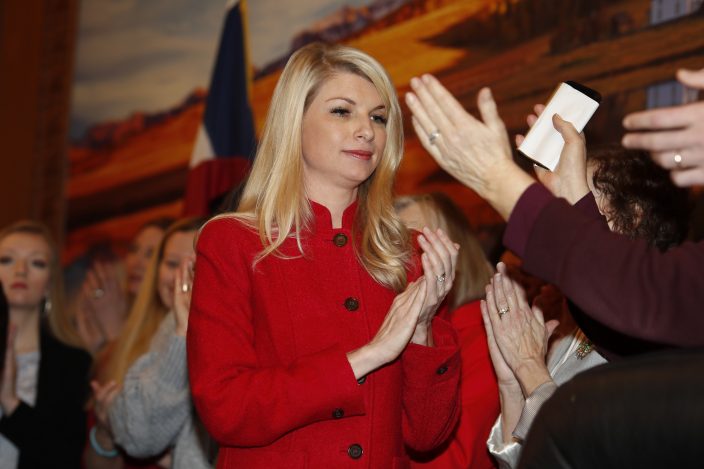 FILE - In this April 12, 2019, file photo, Colorado State Sen. Brittany Pettersen, D-Lakewood, applauds after speaking at a bill signing that allowed Colorado to become the 15th state to adopt a "red flag" law permitting firearms to be taken from people who pose a danger during a ceremony in the state Capitol in Denver. Republicans concerned about losing their grip on political power in certain states have added a new tool to their playbook: the recall election. “It’s our constitutional right to recall,” says Nancy Pallozzi, a Lakewood Republican leading an effort against Sen. Pettersen. (AP PhotoDavid Zalubowski, File)

In Oregon, Republicans are pursuing a recall of Democratic Gov. Kate Brown, who was re-elected last year, after GOP lawmakers walked out of the Senate to try to block votes on climate change and education bills.

Colorado, where Democrats control both houses of the legislature and the governor's office, is seeing its highest level of recall activity since 2013, when two Democratic lawmakers lost their seats for supporting gun control legislation and a third facing recall resigned.

Recall campaigns are targeting Democratic Gov. Jared Polis, two Democratic state House members and two Democrats in the state Senate. Recall committees have been formed for other lawmakers, and the GOP's top-ranking officials have encouraged the efforts. 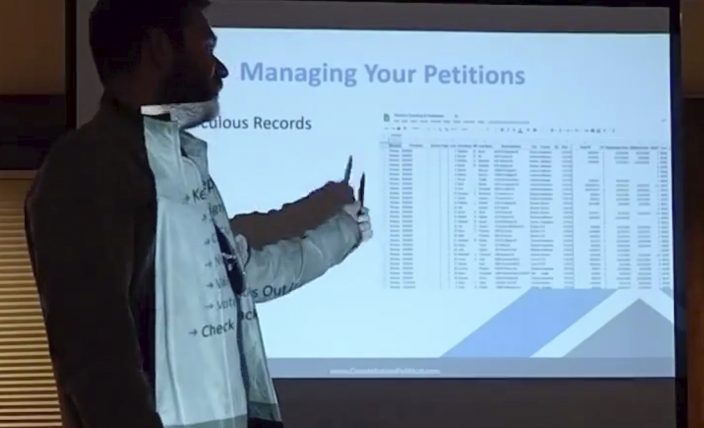 In this frame grab of an April 11, 2019, video provided by Ben Engen of Denver-based Constellation Political Consulting, Engen, a Republican consultant, conducts a training session on how to organize and execute recall campaigns against elected Democratic lawmakers for a group of GOP activists in Buena Vista, Colo. Once reserved for corrupt or inept elected officials, recall campaigns have become a political weapon for Republicans who are trying to undo their losses to Democrats in statewide regular elections. (Constellation Political Consulting via AP)

U.S. Rep. Ken Buck, newly elected as chairman of the Colorado Republican Party, told supporters earlier this year, "We need to teach them how to spell R-E-C-A-L-L."

Colorado recall proponents accused their targets of overreach on issues of gun control, climate change, taxes, sex education and the electoral college — issues that many of the Democrats ran on during their successful campaigns.

Karen Kateline, a talk show host working on the Polis effort, insists that she and other Republicans aren't abusing the original misconduct intent for recalls. 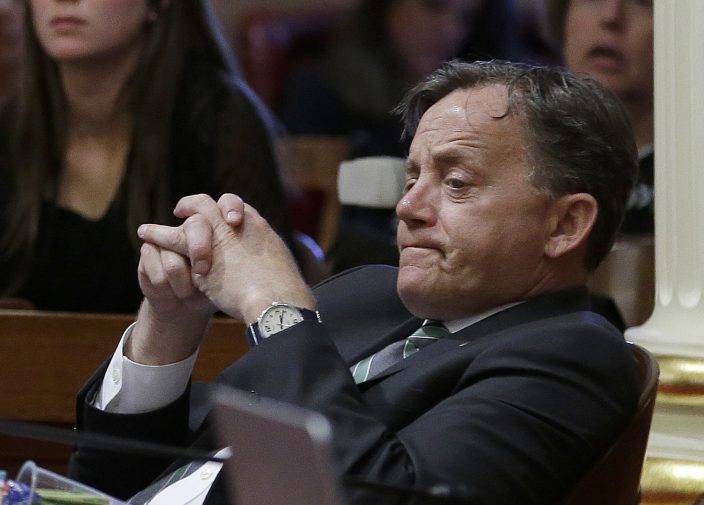 FILE - In this June 11, 2018 file photo, then California state Sen. Josh Newman, D-Fullerton, sits at his desk, in the state Capitol in Sacramento, just days after a successful election to recall him from office. Republicans were successful in recalling the freshman senator, saying the recall was over his vote to support a gas tax increase. But Newman and others say it was really about Republicans trying to win back a swing seat and deprive Democrats of a supermajority in the Senate. (AP PhotoRich Pedroncelli, File)

"Nobody is putting the brakes on these people," she said of Democrats.

"It's our constitutional right to recall," insisted Nancy Pallozzi, a Republican from the Denver suburb of Lakewood, who is leading an effort against state Sen. Brittany Pettersen. "We can't wait for new (GOP) candidates to be vetted for the next election. Three more years for the governor? And three more years for Brittany? No."

Democrats see the recalls as a blatant attempt to undo the results of the most recent elections, which produced a Democratic wave in several Western states. 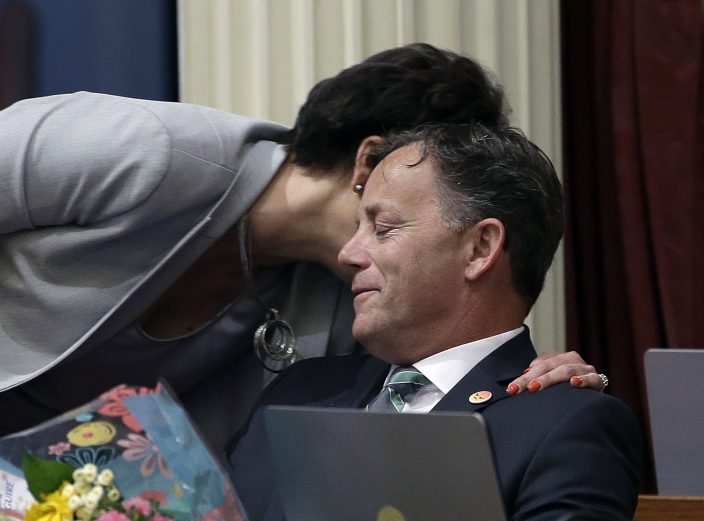 FILE - In this June 11, 2018 file photo, then California state Sen. Josh Newman, D-Fullerton, is hugged by Sen. Connie Leyva, D-Chino, after his remarks at the Capitol in Sacramento, just days after a successful election to recall him from office. Republicans were successful in recalling the freshman senator, saying the recall was over his vote to support a gas tax increase. But Newman and others say it was really about Republicans trying to win back a swing seat and deprive Democrats of a supermajority in the Senate. (AP PhotoRich Pedroncelli, File)

Matt Harringer, spokesman for the Democratic Legislative Campaign Committee, has a simple label for the Republicans pursuing the recall attempts — "sore losers." The committee, which gets involved in state legislative races, has dedicated $135,000 to help fight the Colorado recall attempts.

"Republicans are definitely on the decline in the West, and Colorado is the leader of that," Harringer said. "We don't think there's a huge appetite to recall legislators who are doing what they said they would do." 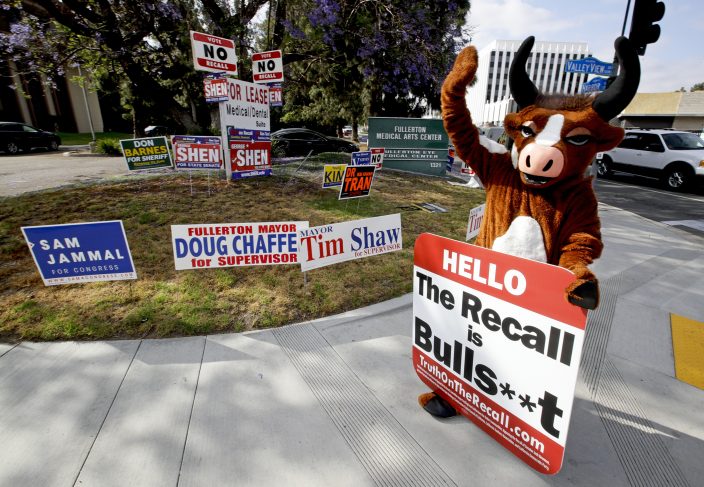 FILE - In this May 30, 2018 file photo, a person in a bull suit, stands amid a plethora of campaign signs, urging voters to reject the recall campaign launched against Democratic California state Senator Josh Newman, in Fullerton, Calif. Republicans were successful in recalling the freshman senator, saying the recall was over his vote to support a gas tax increase. But Newman and others say it was really about Republicans trying to win back a swing seat and deprive Democrats of a supermajority in the Senate. (AP PhotoChris Carlson, File)

Proponents can use the process to time an election and shape the electorate on their own terms, when most voters aren't paying attention, said Engen, a Denver-based consultant who conducted some of those sessions.

For example, a petition drive can be timed to produce a special recall election during the winter holidays — taking advantage of lower turnout by unaffiliated voters who have helped turn Colorado, once a swing state, into Democratic-leaning territory, Engen said in an interview.

"There's a drop-off in turnout from presidential to midterm elections, and the same thing between midterms and off-year elections," Engen said. "Initiators of a recall can use the timing to maximize that enthusiasm gap." 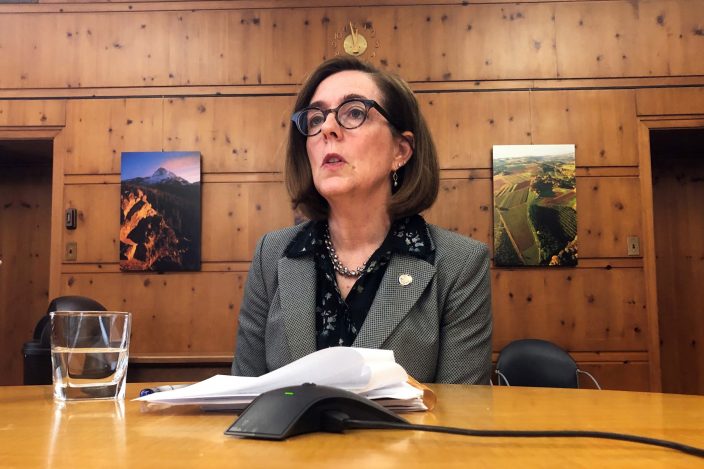 FILE - In this Monday, July 1, 2019, file photo, Oregon Gov. Kate Brown speaks with the media at the Capitol in Salem, Ore. Republicans concerned about losing their grip on political power in the states have added a new tool to their playbook, the recall election. Once reserved for recalling corrupt, absent or inept elected officials, the recall process has been turned into a political weapon by Republicans seeking to undo the results of regular elections. (AP PhotoSarah Zimmerman, File)

To Democrats, that's essentially an admission that Republicans are using the recall not as a vehicle to oust corrupt officials, but rather as an attempt to game the system and flip seats they otherwise could not win in a regular election.

"The strategists see that a recall may be the best chance of winnowing down the electorate in such a way as to sneak through a seat," agreed Jason Bane, a Denver-based Democratic operative. "They need something that goes under the radar for it to work."

In 2018, California Democratic Sen. Josh Newman lost his seat in a recall election, ending Democrats' supermajority. Recall proponents' stated reason for the recall was Newman's support for a gas tax increase, although he was one of dozens of lawmakers in both legislative houses to vote for it. Ironically, California voters reaffirmed the gas tax increase, which is now in effect, just months after voters recalled Newman in a lower-turnout primary. FILE - In this Jan. 16, 2019 file photo, Nevada Gov. Steve Sisolak delivers his first State of the State address from the Assembly Chambers of the Nevada Legislature in Carson City, Nev. Republicans concerned about losing their grip on political power in the states have added a new tool to their playbook, the recall election. Once reserved for recalling corrupt, absent or inept elected officials, the recall process has been turned into a political weapon by Republicans seeking to undo the results of regular elections. (AP PhotoTom R. Smedes, File)

"What made me a target of the recall wasn't my vote per se, but was the opportunity to instead redo an election just months earlier, and on more favorable terms," said Newman, who plans to run for his old seat in 2020, when turnout will be far higher.

Previous success, as in California and Colorado, has emboldened Republicans to keep trying.

In Nevada, a group of conservatives say they're preparing a recall effort against first-term Democratic Gov. Steve Sisolak, who signed a law, passed by the Democratic-controlled Legislature, adding restrictions to the recall process.

Oregon Republican Party Chairman Bill Currier filed paperwork to recall Brown based on what he called the governor's failure to honor the will of the voters and her "politically-motivated agendas." Currier did not return multiple inquiries seeking elaboration.

KC Hanson, chairwoman of the Oregon Democratic Party, called the recall effort a political stunt meant to undermine the results of the November 2018 election, which also gave Democrats a legislative supermajority.

"The GOP is embracing inflammatory rhetoric and pursuing a fool's errand by trying to recall a governor that voters re-elected by a wide margin less than a year ago," she said. ""Clearly, the GOP is scared of what's on the horizon for 2020."

Recalls were first staged in a handful of states in the early 20th century, an era of progressive political reforms, to remove public officials for corruption or ineptitude. Today, 19 states allow statewide recalls, 11 of them for any reason.

Until recent years, they have rarely been used as a political tactic to flip legislative seats or target governors over policy disagreements, said Jason Spivak, who tracks recalls nationwide and is a senior fellow at Wagner College in New York.

"Voters in general see this as not playing by the rules," he said.

New Mexico is among the majority of states that does not have the recall. This year, a Republican state lawmaker sought to change that.

Rep. Bill Rehm insists the intent of his proposal was to honor the standard that recalls should be reserved for performance in office, not politics.

"I don't want it used as a political tool. And I don't want the public to use it as a threat," he said. "The public should have a way to get rid of me if I'm not performing."

The Democrats who control the New Mexico legislature were not persuaded. Rehm's bill did not get a hearing.