The strategy worked. And the offense did the rest. 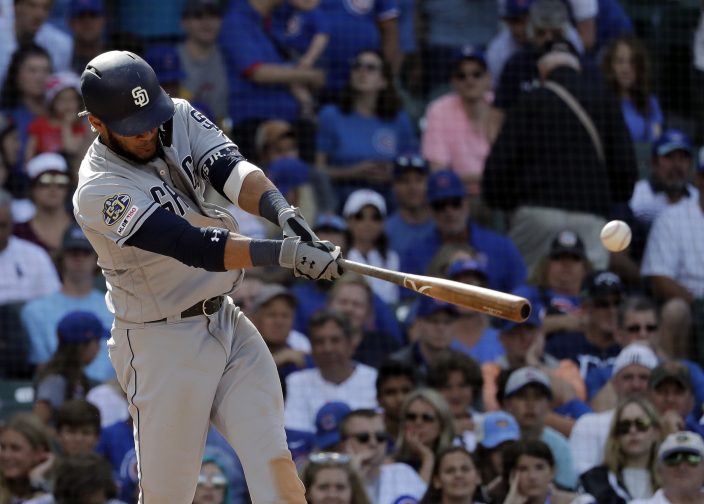 Mejia and Tatis had two hits apiece for the Padres, who scored three runs in the ninth and have won just two of their last nine.

Kyle Hendricks allowed two runs in seven innings and Anthony Rizzo had two hits for the NL Central-leading Cubs, who are 7-2 after the All-Star break.

"I'll sign up for it any day of the week," Cubs manager Joe Maddon said of the record.

Quantrill (3-2) threw 5 2/3 scoreless innings of relief, retiring 14 of his final 15 batters. He struck out six and walked none.

"Whatever role we give him: start a game, relief, throw one inning, throw five innings out of the 'pen," manager Andy Green said. "He's done it all really well. Yesterday when I talked to him, I told him, 'Hey, your job tomorrow is to get the ball to Kirby (Yates),' and he took it straight to Kirby today."

Quantrill took over for Adrian Morejon, who allowed one run and three hits in 2 1/3 innings as the opener. Morejon, 20, is the second-youngest pitcher to debut with the Padres. The left-hander went 0-4 with a 4.25 ERA in 16 starts at Double-A Amarillo before his call-up. 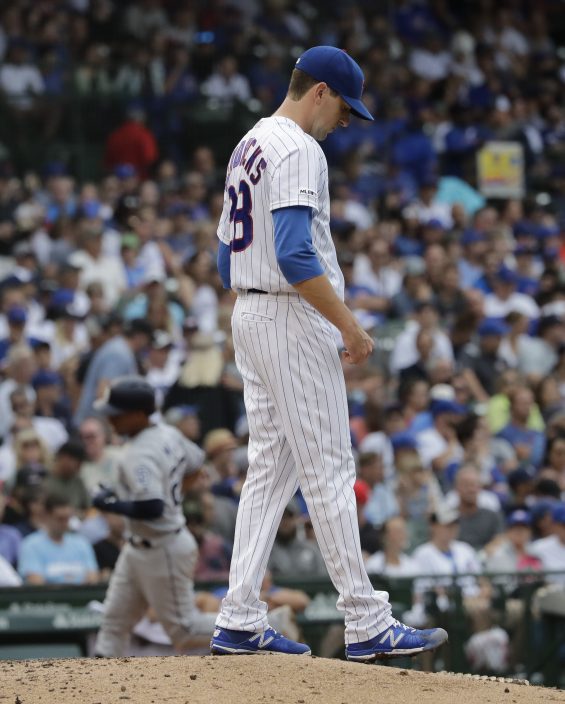 "The first hitter, I was pretty nervous. But after I got it out of the way, that's all fine," Morejon said through an interpreter.

Yates struck out three in the ninth to work around a Rizzo single.

"I don't want to be a reliever, but I will say this: The mentality, 'On to the next guy,' that works," said Quantrill, who has made eight starts. "It works as a starter too. Kirby's the best in the game. I knew if I get the ball to Kirby, we're gonna win this baseball game." Pinch hitter Greg Garcia was hit by a pitch from Carl Edwards Jr. to bring in a run in the ninth after Kyle Ryan allowed a walk and a bunt single. Tatis followed with a two-run single. Edwards was making his first appearance since June 9 after spending time on the IL for a thoracic strain.

"It was a good setup for him to get reindoctrinated, get one out, walk off the mound and feel good about himself," Maddon said. "And it didn't happen."

Hendricks (7-8) gave up four hits in his longest start since he came off the IL July 2. His home ERA increased to 1.89.

"He was good," Maddon said. "We just didn't score enough runs obviously and it set up the bullpen differently for us at the end of the game."

Javier Baez singled, advanced to third on Kris Bryant's blooper and scored on Rizzo's groundout to give the Cubs the lead in the first.

The Padres tied the game in the fifth when Luis Urias drew a walk, advanced on a sacrifice and scored on Tatis' single.

Mejia hit his fourth home run on a full count against Hendricks to lead off the seventh and put the Padres ahead 2-1.

After the heat climbed into the 90s Saturday, the first-pitch temperature was 72 Sunday. Rain delayed the start of the game 32 minutes.

The Cubs could be active as the trade deadline looms.

"There's different areas we do need to firm up — we know that, everybody knows that — so we've been talking," Maddon said.

Padres: The contracts of RHP Michel Baez and Morejon were selected from Double-A Amarillo. OF Josh Naylor and RHP Trey Wingenter were optioned to Triple-A El Paso. To make room on the 40-man roster, RHP Adam Warren (right forearm strain) was transferred to the 60-day IL and RHP Miguel Diaz (left knee surgery) was recalled from Triple-A and transferred to the 60-day IL.

Cubs: Maddon said LHP Cole Hamels (left oblique strain) was doing well after he threw a bullpen session Saturday for the first time since going on the IL June 29. The team is discussing the next step for Hamels. ... C Willson Contreras (right foot strain) will possibly be activated Wednesday, when he is eligible to come off the IL, Maddon said.

Padres: A starter has yet to be announced for Tuesday's series opener against the Mets and LHP Jason Vargas (4-5, 4.25 ERA).

Stock markets are heading for thei ...