Morgenthau, who served as U.S. Attorney for New York's southern district during the Kennedy and Johnson administrations, returned to law enforcement as Manhattan's top state prosecutor in 1974 and didn't leave for 35 years, with his office handling around 100,000 criminal cases yearly. 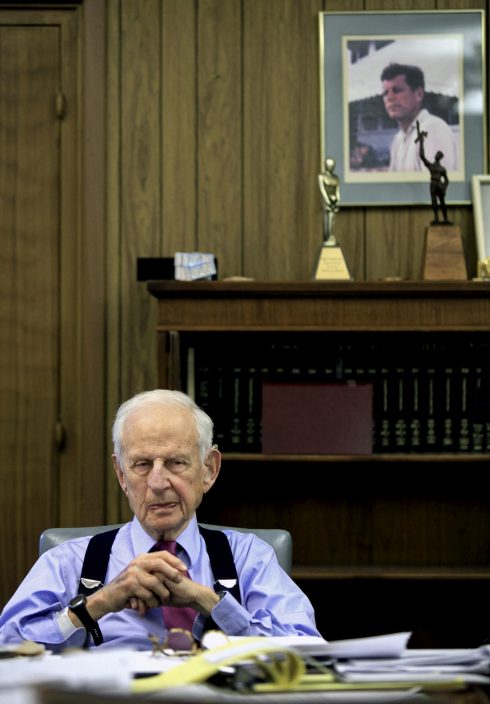 FILE - In this Dec. 16, 2009 file photo, Manhattan District Attorney Robert Morgenthau listens during an interview at his office in New York, as he prepares to step down after 35 years as DA. Morgenthau, the longest-serving former Manhattan district attorney who tried mob kingpins, music stars and white-collar criminals and inspired a character on 'Law & Order' has died. He was 99. His wife, Lucinda Franks, told The New York Times that Morgenthau died Sunday, July 21, 2019, at a Manhattan hospital after a short illness. AP PhotoBebeto Matthews, File)

In 2005, at age 86, Morgenthau was elected for the eighth and last time, turning back a challenge from Leslie Crocker Snyder, a popular former state judge. Snyder tried without success to turn Morgenthau's age and lengthy tenure into campaign issues.

Morgenthau left office in 2009, throwing his support to his eventual successor, Cy Vance.

At the time, he told The Associated Press he was retiring because "I looked at my birth certificate, and I said, 'It's about time.'" 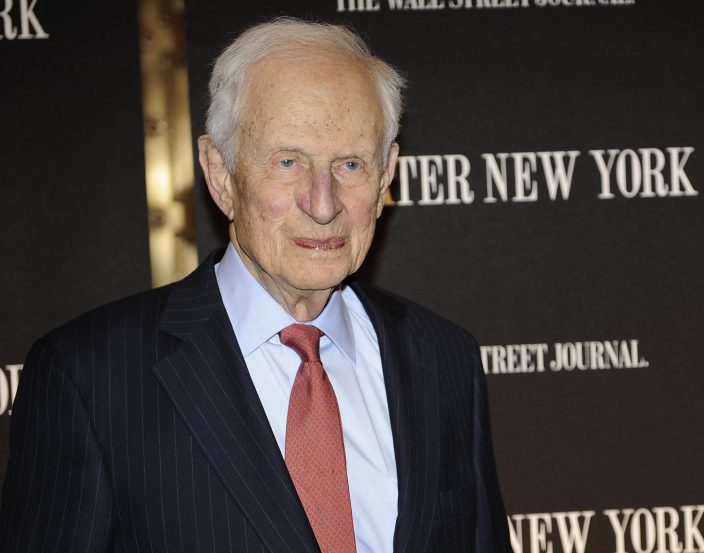 In his position at the forefront of Manhattan's legal and political scene, Morgenthau cultivated a dignified, above-the-fray presence, and was widely acknowledged by allies and foes alike as effective, nonpartisan and incorruptible.

From that emerged a national reputation that extended beyond the courthouse. Tall and distinguished in appearance, he was the model for the avuncular character of prosecutor Adam Schiff, played by actor Steven Hill on the long-running television series, "Law & Order."

Morgenthau, who had claimed a 97% conviction rate while U.S. attorney, lost the Combs case, but in the late 1990s, his state DA's office was winning guilty verdicts in three of four cases.

However, Morgenthau insisted that convictions weren't everything.

"The prosecutor's job is to protect the public and to administer the laws," Morgenthau once said, deriding district attorneys who collected convictions like "notches on a gun."

That premise was put to the test in the Central Park jogger case, one of the most sensational prosecutions handled by his office. Thirteen years after a female jogger was attacked in the infamous gang "wilding" spree, Morgenthau asked a judge in 2002 to throw out the convictions of five men because DNA evidence and another man's confession put them into question.

His childhood reflected his lineage. Morgenthau had a lifelong friendship with members of the Kennedy clan; he once cooked hot dogs with Eleanor Roosevelt for Great Britain's King George VI; on another occasion he prepared a mint julep for Winston Churchill.

He joined the U.S. Navy one day after graduating Amherst College in 1941 and spent 4 ½ years in the service during World War II, earning the rank of lieutenant commander while seeing action aboard destroyers in the Mediterranean and the Pacific.

In 1960, Morgenthau campaigned in New York for his friend and fellow Democrat, John F. Kennedy. The next year, the new president named him to the prestigious post of U.S. attorney for the Southern District of New York, the nation's busiest such office.

Morgenthau resigned after 17 months to run for governor against incumbent Republican Nelson Rockefeller. After his defeat in a disastrous campaign in 1962, Morgenthau was reappointed federal prosecutor by Kennedy.

Morgenthau was forced out as federal prosecutor in January 1970 by President Richard M. Nixon after months of resisting political pressure to resign. He briefly joined Mayor John Lindsay's administration as a deputy mayor, then waged another losing gubernatorial race before leaving the public eye for the next four years, engaged in private law practice.

In 1974, Manhattan District Attorney Frank Hogan resigned due to health problems after 32 years on the job. Morgenthau then launched his first successful run for public office.

Over the next quarter-century, Morgenthau was elected another seven times as head of one of the nation's largest law offices, with 550 prosecutors and 700 other staffers. Among prominent figures who served in the office was the late John F. Kennedy Jr., U.S. Supreme Court Justice Sonia Sotomayor and Snyder, who ran against him in 2005.

Snyder mounted a vigorous campaign in which she pointed out that "Law & Order" had three district attorneys in 17 years on the air whereas Morgenthau had served alone for 30. The New York Times agreed that "three decades is more than enough time for any executive to accomplish his or her mission," but that endorsement did not help Snyder overcome his advantage at the polls.

In addition to jailing Goetz in the 1984 wounding of four black youths who tried to rob him on a subway train, Morgenthau's notable convictions included a crack dealer who murdered the son of AOL Time-Warner head Gerald Levin; the murderous mother-and-son grifter team, Sante and Kenneth Kimes Jr.; and seven youths who killed a Utah tourist in a subway mugging in 1990.

His civic work included a relationship with the Police Athletic League that dates to 1962, and his position as chairman of the Museum of Jewish Heritage, which opened in 1997.

He collected a variety of awards and honors, including the Citation of Merit from Yale Law School and the Thomas Jefferson Award in Law from the University of Virginia.

Morgenthau was survived by his wife, Pulitzer Prize-winning reporter Lucinda Franks, and seven children. His first wife, the former Martha Pattridge, died of cancer in 1972.