British Prime Minister Theresa May will chair an emergency security session to discuss how to respond to Iran's seizure of a British-flagged tanker in the Strait of Hormuz.

The meeting of security ministers and officials on Monday will discuss how to secure shipping in the sensitive region, which is vital to the world's oil supply.

Foreign Secretary Jeremy Hunt is also expected to brief Parliament on the Friday seizure of the Stena Impero tanker, now in a heavily guarded Iranian port. 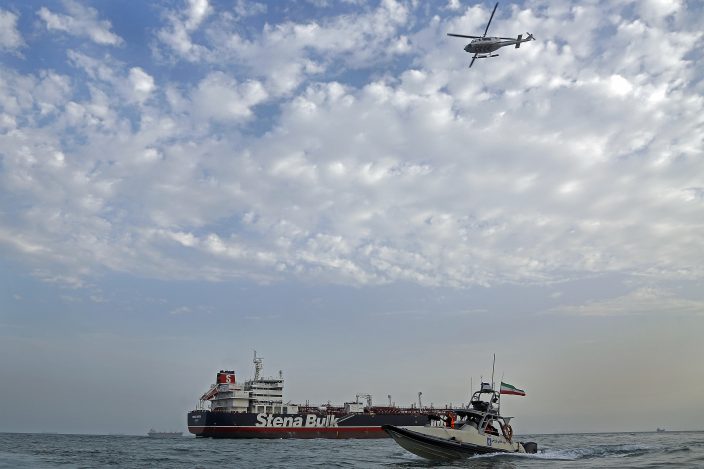 A speedboat and a helicopter of the Iran's Revolutionary Guard move around a British-flagged oil tanker Stena Impero which was seized on Friday by the Guard, in the Iranian port of Bandar Abbas, Sunday, July 21, 2019. Iranian officials say the seizure of the British oil tanker was a justified response to Britain's role in impounding an Iranian supertanker two weeks earlier off the coast of Gibraltar, a British territory located on the southern tip of Spain. (Hasan ShirvaniMizan News Agency via AP)

Britain is considering a number of options to raise the pressure on Iran but officials say military operations are not being considered at the moment.

Britain is also seeking diplomatic and operational support from key European allies in an effort to keep the Strait of Hormuz open to shipping.

ISLAMABAD — Pakistan reported a re ...

Iran leader says Israel a 'cancerous tumor' to be destroyed

Iran's Guard says it launched satellite amid US tensions

Iran’s Guard acknowledges encounter with US during a drill

US Navy carrier transits Strait of Hormuz after deployment