Britain's next prime minister will govern a nation of 66 million people, but only 0.25% of them had a say in the choice.

Either Boris Johnson or Jeremy Hunt will be announced Tuesday as the winner of a contest to lead the governing Conservative Party. After a formal handover of power, the victor will become prime minister the next day.

A look at how the process works: 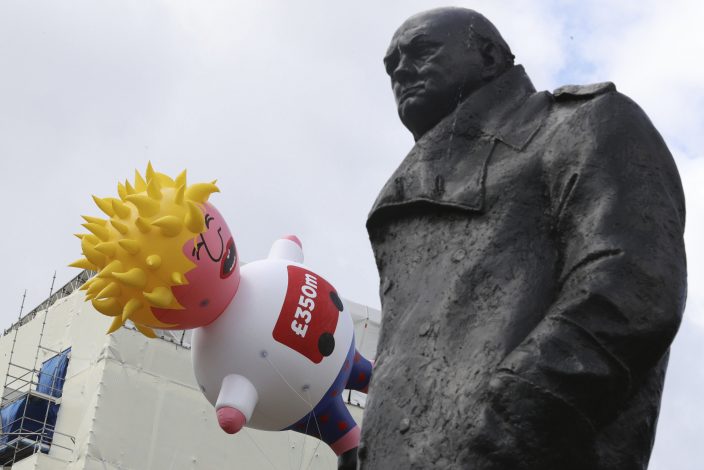 A blimp balloon depicting contender for leadership of Britain's ruling Conservative Party, Boris Johnson is launched outside Parliament, next to a statue of wartime leader Winston Churchill, during an anti-Brexit protest in London, Saturday July, 20, 2019. The pro-European march was organised by the March for Change group. Johnson is a leading Brexit advocate. (Aaron ChownPA via AP)

In Britain's parliamentary system, voters elect a lawmaker for their local area. There are 650 of these constituencies across the U.K., and so 650 members of Parliament. The party with the most lawmakers forms a government, with the leader of that party becoming prime minister.

Parties are entitled to change leaders without going back to the voting public. It happened when Gordon Brown replaced Tony Blair as Labour prime minister in 2007, and when Theresa May took over from her Conservative predecessor David Cameron in 2016. 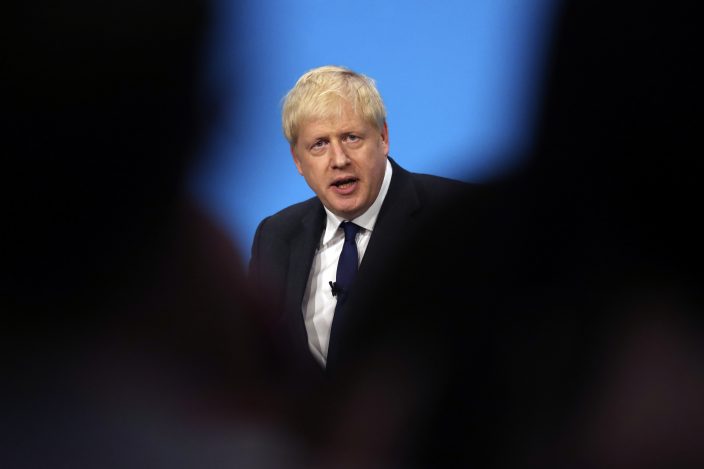 May announced her resignation last month, triggering a leadership contest in which any of the 313 Conservative legislators was eligible to run. The initial field of 10 candidates was then winnowed down to two in elimination votes by Tory lawmakers.

The final two, Hunt and Johnson, went to a runoff decided in a postal ballot of about 160,000 Conservative members across the country. To be eligible to vote, they need to have paid a 25 pound ($31) membership fee and been in the party for at least three months.

The country's leadership choice is largely in the hands of comfortably off, older white men.

According to a U.K. academic study, 70% of Conservative members are men, half are over 55, 86% are middle class or above and 97% are white — in a country where 10%-15% of the population belongs to an ethnic minority.

Most of them want Britain to leave the European Union, whatever the consequences. Two-thirds of Conservatives support leaving the EU without a divorce deal even if it damages the British economy.

Both Johnson and Hunt campaigned on a promise to take Britain out of the 28-nation bloc, deal or no deal.

HOW DOES THE HANDOVER HAPPEN?

The winner of the vote will immediately become Conservative leader, but they won't be prime minister until a carefully choreographed political handover on Wednesday.

May is due to hold her final weekly prime minister's questions session in the House of Commons at noon Wednesday. Then she will travel to Buckingham Palace and ask Queen Elizabeth II to invite her Conservative successor to form a government.

The next leader will go to the palace before speaking to the nation in front of his new home at 10 Downing St.

WHEN DOES THE PUBLIC GET A SAY?

Most Britons have had to watch the leadership contest — complete with campaign rallies and televised debates — as passive spectators.

The situation strikes many as undemocratic, although the criticism is often partisan. In 2007, Johnson criticized Labour's handover from Blair to Brown without an election as "a palace coup" and compared it to the succession of Roman emperors.

He's not so critical of the current contest.

And, in comparison to presidential systems of government, it's relatively easy to get rid of a British prime minister.

Conservative lawmakers can trigger a no-confidence vote in their leader if 15% of them ask for it. May narrowly survived one such vote in December.

Alternately, the Labour opposition can call a no-confidence vote in the government — something that looks highly likely to happen by September. If the Conservative government lost such a vote, it would have 14 days to overturn the result with a new vote or fall, triggering a national election.

Britain's next scheduled election is in 2022, but the incoming prime minister might call an early vote if he can't get his plans approved, and seek a new mandate from the electorate. Even an unelected prime minister eventually has to face the judgment of the public.

Luminaries Lost: A look at some of the artists lost to ...

A comedian whose faces made genera ...