Britain's governing Conservative Party is set to reveal Tuesday the identity of the country's next prime minister, with Brexit champion Boris Johnson the strong favorite to get the job.

Party officials will announce whether Johnson or rival Jeremy Hunt has won a ballot of about 160,000 Conservative members.

The winner replaces Theresa May, who announced her resignation last month, and will officially become prime minister on Wednesday. 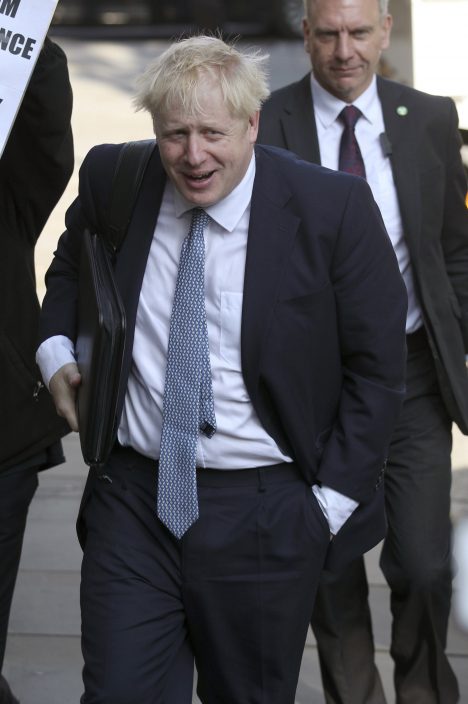 Conservative party leadership contender Boris Johnson arrives at his office in central London, Monday July 22, 2019. Britain’s governing Conservative Party is set to reveal the name of the country’s next prime minister later Wednesday, with Brexit champion Boris Johnson widely considered to be favourite to get the job against fellow contender Jeremy Hunt. (Yui MokPA via AP)

It will be a huge upset if the winner is not Johnson, a former London mayor who has wooed Conservatives by promising to succeed where May failed and lead the U.K. out of the European Union on the scheduled date of Oct. 31 — with or without a divorce deal.

Several Conservative ministers have already announced they will resign to fight any push for a "no-deal" Brexit, an outcome economists warn would disrupt trade and plunge the U.K. into recession.

May stepped down after Britain's Parliament repeatedly rejected the withdrawal agreement she struck with the 28-nation bloc. Johnson insists he can get the EU to renegotiate — something the bloc insists it will not do.

If not, he says Britain must leave the EU on Halloween, "come what may."

Hunt has also vowed to leave the EU with or without a deal, so whoever wins Britain faces a volatile political showdown over Brexit. The new prime minister will preside over a House of Commons in which most members oppose leaving the EU without a deal, and where the Conservative Party lacks an overall majority.

Swift firings for Minneapolis officers in death of blac ...

Huawei CFO Meng to find out if her fraud case will proc ...

UN: Virus could push 14 million into hunger in Latin Am ...

After boost from Perry, supporters got huge Ukraine gas deal

After push from Perry, backers got huge gas deal in Ukraine