A Russian pilot who managed to smoothly land his disabled plane in a corn field after birds hit both engines says a quick landing was his only chance and he was not afraid of handling it.

Damir Yusupov, 41 said when one of the plane's engines shut down he hoped to circle the airport and land normally, but then second engine cut off moments later, leaving him no choice. He landed his A321 so smoothly that just one of the 233 people on board was hospitalized.

Yusupov's feat Thursday drew comparisons to the 2009 "miracle on the Hudson," when Capt. Chesley Sullenberger safely ditched his plane in New York's Hudson River after a bird strike disabled its engines. 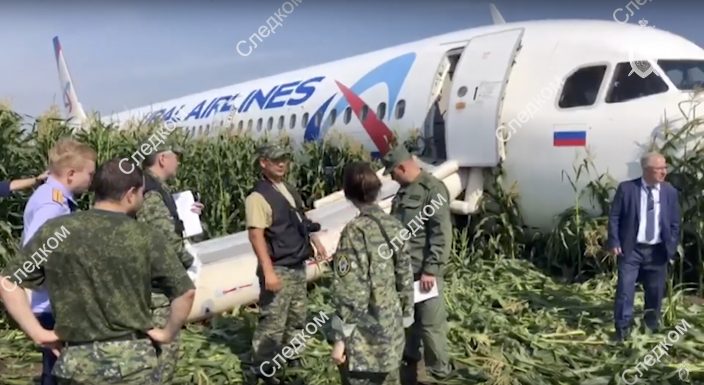 In this file image taken from a video distributed by Russian Investigative Committee, Investigative Committee employees work at the crash site of a Russian Ural Airlines' A321 plane is seen after an emergency landing in a cornfield near Ramenskoye, outside Moscow, Russia, Thursday, Aug. 15, 2019. The Russian pilot was being hailed as a hero Thursday for safely landing his passenger jet in a corn field after it collided with a flock of gulls seconds after takeoff, causing both engines to malfunction. While dozens of people on the plane sought medical assistance, only one was hospitalized. (The Investigative Committee of the Russian Federation via AP) EDS NOTE: Watermark placed on image at source translated as InvestCom

Yusupov told reporters Friday he "saw a corn field ahead and hoped to make a reasonably soft landing."