Life in the Bundesliga began in silence for Union Berlin on Sunday with a 15-minute protest by their fans against opponents Leipzig.

A minute after Union fans finally unleashed their support, it was the visiting supporters making all the noise after Leipzig scored the opening goal in a 4-0 rout of the first team from what was East Berlin to play in Germany's top flight.

The home fans stayed quiet for the opening 15 minutes, answering a call from Union ultra group, the Wuhlesyndikat, which had urged supporters to protest what they called "a constructed club that has absolutely nothing to do with our idea of football." 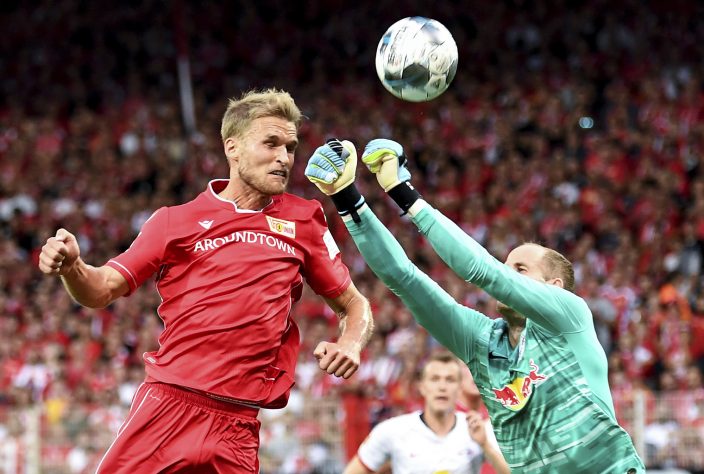 Berlin's Sebastian Andersson, left, vies for the ball with Leipzig goalkeeper Peter Gulacsi, during the German Bundesliga soccer match between Union Berlin and RB Leipzig, at the Stadion An der Alten Foersterei, in Berlin, Sunday, Aug. 18, 2019. (Britta Pedersendpa via AP)

Red Bull-backed Leipzig has been unpopular among rival fans since the club's formation in 2009.

Marcel Halstenberg's opening goal was followed in the first half by more from Marcel Sabitzer and Timo Werner. Substitute Christopher Nkunku marked his debut with a goal after the break, underlining the gulf in quality between sides that finished third in their respective divisions last season, and giving Julian Nagelsmann a winning start in his first league game in charge of Leipzig.

Union secured promotion on away goals after two draws with Stuttgart in the playoff in May.

The Australian government says it ...

No promotion for Bayern reserves despite winning 3rd tier

Bremen’s Bundesliga future on edge after 0-0 with Heidenheim