Rafael Devers went 4 for 5 with a homer, two doubles and four RBIs, and the Boston Red Sox rallied from an early six-run deficit for a 13-7 victory Sunday that completed a three-game sweep of the Baltimore Orioles.

J.D. Martinez added three hits and two RBIs, and Sam Travis hit a solo homer for the Red Sox, who won their fifth straight as they try to climb out of a deep hole for the second AL wild card. Boston trails Tampa Bay by 6½ games. 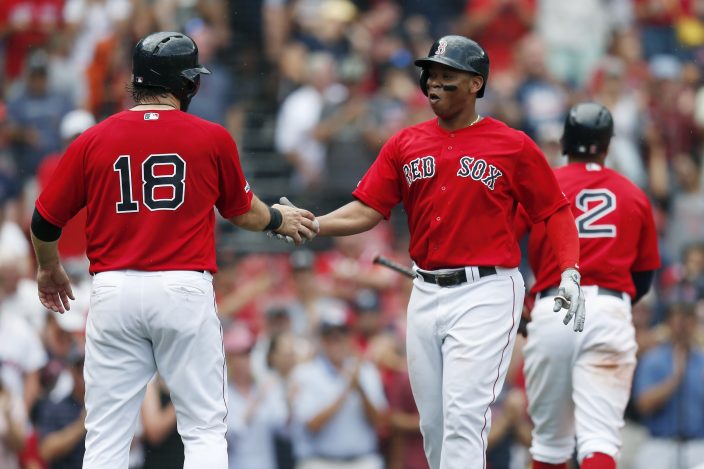 Renato Núñez had a three-homer and drove in four runs, and Trey Mancini hit a two-run single for last-place Baltimore, which dropped its seventh in a row.

Trailing 6-3 in the sixth, the Red Sox completed their comeback and took the lead with six runs. Christian Vázquez drove in the first with an RBI double. Pinch-hitter Mitch Moreland followed with a shallow fly against Paul Fry (1-5) that dropped in behind shortstop between three players with a shifted infield.

Travis scored easily from third and Vázquez raced home when shortstop Jonathan Villar threw wildly to the plate. Devers followed with a go-ahead double off the Green Monster before Xander Bogaerts and Martinez each had a run-scoring infield hit. The second came when reliever Shawn Armstrong was late covering first. 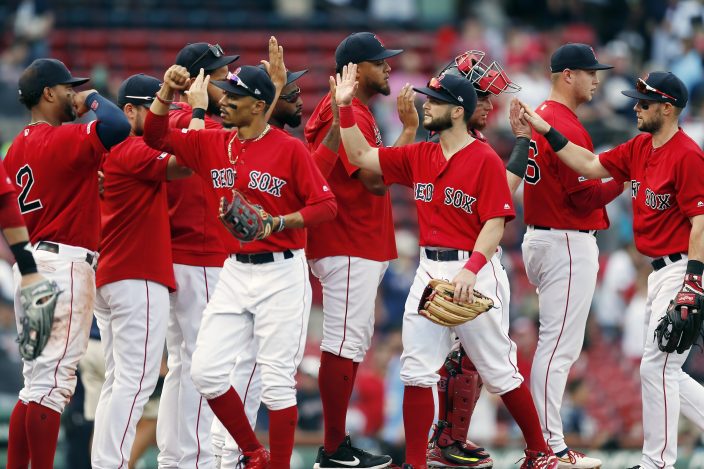 Marcus Walden (8-2), the fourth of six relievers, got the win by working a scoreless inning.

Held to one run over the first two games of the series, the Orioles jumped ahead when Núñez's drive left Fenway Park over the Monster. Mancini's single made it 5-0 and Hanser Alberto added an RBI double.

Boston chipped away with two in the third before Travis homered into the center field batter's eye an inning later. 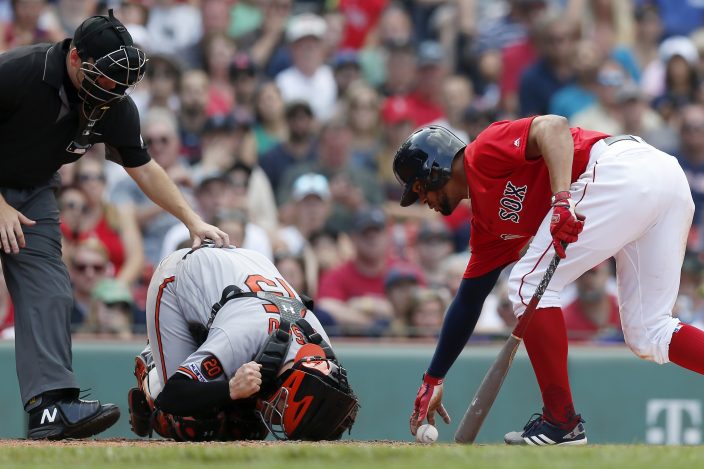 Making his first start since April 17, Boston's Nathan Eovaldi was roughed up for five runs in two innings.

He didn't look sharp from the beginning, giving up a double to Villar on his third pitch before walking Mancini. Overall, the right-hander walked three and threw two wild pitches. 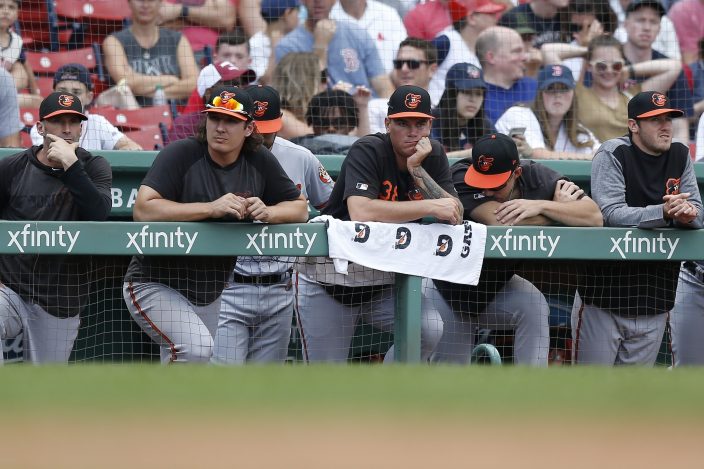 Baltimore Orioles' Aaron Brooks (38) and teammates watch from the dugout during the ninth inning of a baseball game against the Boston Red Sox in Boston, Sunday, Aug. 18, 2019. (AP PhotoMichael Dwyer)

The 29-year-old Eovaldi was sidelined for nearly three months and made 11 relief appearances after surgery to remove a loose body from his right elbow in April.

Boston's half of the sixth lasted 39 minutes, with the Red Sox getting six hits and three walks before it finally ended when Travis struck out with the bases loaded. 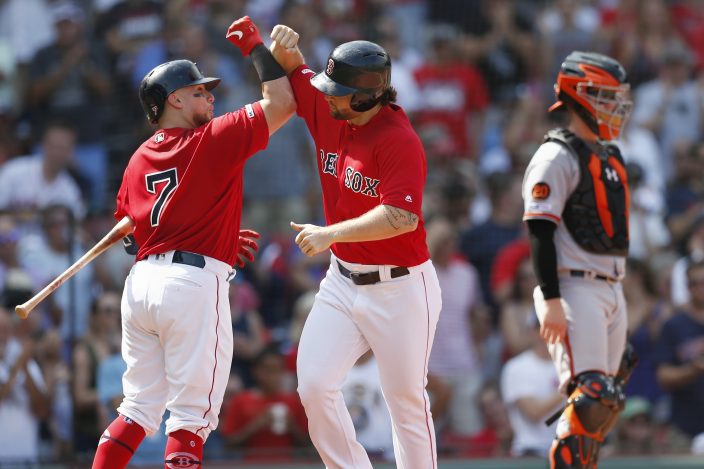 They followed with another four runs in the seventh — with Devers' two-run homer the key hit.

Baltimore starter Ty Blach left with a 6-3 lead and two on in the sixth.

Orioles: C Chance Sisco was shaken up after Travis collided with him, scoring a run. Sisco stayed in, but later in the inning was hit by a foul ball in the midsection and had to come out. 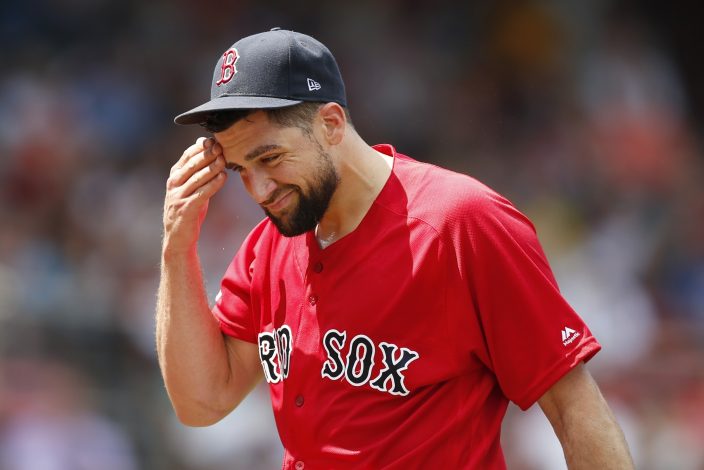 Boston Red Sox's Nathan Eovaldi walks to the dugout after pitching during the first inning of a baseball game against the Baltimore Orioles in Boston, Sunday, Aug. 18, 2019. (AP PhotoMichael Dwyer)

Red Sox: Manager Alex Cora said LHP Chris Sale will see Dr. James Andrews in Florida on Monday. Sale was put on the 10-day injured list Saturday after an MRI showed inflammation in his pitching elbow. The lefty hasn't spoken to reporters since going on the IL. "He just wants to be straight up and have all the information when he talks to you guys," Cora said. . LHP David Price (left wrist cyst) played catch in the outfield after throwing a bullpen Saturday. 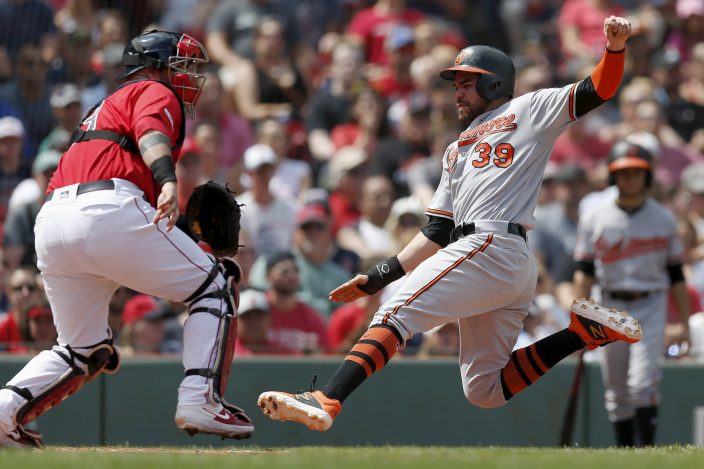 Red Sox: Begin a two-game interleague series versus Philadelphia at Fenway Park on Tuesday. Cora hadn't announced a starter yet.

Rules once lifted are reimposed to try to curb new outb ...

Virus restrictions once lifted are ...