Justin Thomas had more stress than he wanted and answered with the shots he needed Sunday at Medinah to win the BMW Championship and claim the No. 1 seed going into the FedEx Cup finale.

Thomas watched a six-shot lead shrink to two in a span of three holes around the turn until he regained control with two great wedges, and two pivotal putts. One last birdie gave him a 4-under 68 and a three-shot victory over Patrick Cantlay (65).

The victory, the first for Thomas since the World Golf Championship at Firestone last year, gives him a two-shot lead starting the Tour Championship next week as the top 30 players in the FedEx Cup chase the $15 million prize. 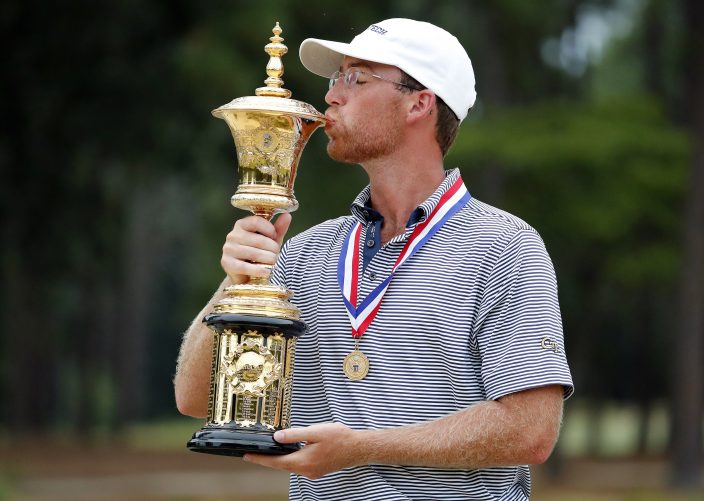 Andy Ogletree poses with the Havemeyer Trophy following his win at the USGA Amateur Golf Championship at the Pinehurst Country Club in Pinehurst, N.C., Sunday, Aug. 18, 2019. (AP PhotoKarl B DeBlaker)

The field will have a staggered start based on their position in the FedEx Cup, meaning Thomas starts at 10-under par.

The top 30 who advanced includes Lucas Glover, who went bogey-double bogey late in his round until finishing with a par to wrap up his first trip to East Lake in 10 years.

It will not include Masters champion Tiger Woods, the defending champion.

Woods was a long shot going into the final round to crack the top 30, and he closed with a 72. East Lake was his first victory in five years, capping his return from four back surgeries, a special moment replaced some six months later by his Masters victory.

Hideki Matsuyama took the 36-hole lead with a 63 until falling back with a 73. He responded with another 63 to finish alone in third, making him one of three players who moved into the top 30 to reach East Lake. The other was Jason Kokrak, but only after J.T. Poston made bogey on his final hole.

The U.S. team for the Presidents Cup didn't change, with Bryson DeChambeau holding down the final spot. Tony Finau would have needed to finish alone in third. He closed with a 69 to finish fourth, unable to keep up with Matsuyama.

Nothing changed for the International team either, as Jason Day failed to earn one of the eight automatic spots.

Thomas finished at 25-under 263 — seven shots lower than what Woods shot at Medinah when he won the 2006 PGA Championship — and earned $1,665,000. Even more money is at stake next week, though this was a burden lifted. All he cared about was winning.

Making his second senior start after turning 50 last month, Barron closed with a 6-under 66 at at En Joie Golf Club to finish the wire-to-wire victory at 17-under 199. With Couples in the clubhouse after a 63, Barron returned from the rain delay to hole the first 15-footer on the par-4 15th to break a tie for the lead, then doubled the advantage with the second one on the par-3 17th.

Barron is the first open qualifier to win since Willie Wood in the 2012 event at En Joie, and the first to win wire-to-wire. After tying for fifth in the Senior British Open in his Champions debut, Barron got into the field Monday with a 66 at The Links at Hiawatha Landing.

Barron was winless on the PGA Tour in 238 starts, playing the defunct B.C. Open seven times at En-Joie. In 2009, three years after losing his PGA Tour card, Barron became the first player to be suspended by the tour for testing positive for a performance-enhancing substance. He was suspended for one year.

Scottie Scheffler won the Nationwide Children's Hospital Championship, closing with a 4-under 67 for a two-stroke victory in the Korn Ferry Tour Finals opener.

Scheffler finished at 12-under 272 on Ohio State University Golf Club's Scarlet Course. The former University of Texas player won the Evans Scholars Invitational in May and finished third on the Korn Ferry Tour's regular-season money list to earn a PGA Tour card for next season. Scheffler earned $180,000.

The players who have yet to earn PGA Tour cards are fighting for 25 spots based on their finishes in the four-event Finals standings.

Ogletree was 4 down early in the morning round of the 36-hole final at Pinehurst's renovated No. 4, but won four of the final seven holes on the No. 2 course to claim the championship matchup of 21-year-old college seniors.

He ended it on the 17th, sticking his tee shot on the par-3 hole on the green and two-putting for par. Augenstein four-putted for a double bogey. Augenstein, from Kentucky, was the first Vanderbilt player to reach the final since Luke List in 2004.

Belgium's Thomas Pieters became the first two-time winner in Czech Masters history, shooting a 3-under 69 for a one-stroke victory over Adri Arnaus of Spain.

Pieters finished at 19-under 269 at Albatross Golf Resort for his fourth European Tour victory. He also win in 2015 at Albatross.

Arnaus closed with a 69.

Andrew Dodt closed with an 8-under 64 and beat Richard T. Lee (66) in a playoff in the Sarawak Championship. Jazz Janewattananond of Thailand, one shot out of the lead going into the final round, closed with a 69 and lost his bid to earn enough world ranking points to automatically qualify for the Presidents Cup. ... Jack Senior closed with a 3-under 70 and made birdie on the second playoff hole to beat Matthew Baldwin (64) in the ISPS Handa World Invitational Men & Women on the European Challenge Tour. In the women's division, Stephanie Meadow shot 73 and held on for a one-shot victory over Charley Hull. ... Former British Open champion Paul Lawrie closed with an even-par 71 and won the Scottish Senior Open by two shots over Peter Baker and Peter Fowler. ... Derek Barron won the Mackenzie Tour's Players Cup at Southwood in Winnipeg, Manitoba. He closed with an even-par 72 for a two-stroke victory over Kyler Dunkle (70) and Ryan Snouffer (71). ... Min Ji Lee closed with a 2-under 69 for a one-shot victory over Ha Na Jang and Da Yeon Lee in the Bogner-MBN Ladies Open on the Korean LPGA Tour. ... Lala Anai shot 7-under 65 and made par on the first playoff hole to capture the NEC Karuizawa 72 Golf Tournament on the Japan LPGA Tour. ... Taiwan's Ssu-Chia Cheng won the Firekeepers Casino Hotel Championship in Battle Creek, Michigan, for her first Symetra Tour title. She finished with a 4-under 68 for a two-stroke victory over Milagros Chaves (70) and Paula Reto (71). Cheng jumped to No. 3 on the money list, with the final top 10 getting LPGA Tour cards.

Simpson gets playoff win in Phoenix, McDowell wins in Saudi

Larrazabal stumbles, then rallies to win in South Africa