A look at recent developments in the South China Sea, where China is pitted against smaller neighbors in multiple disputes over islands, coral reefs and lagoons. The waters are a major shipping route for global commerce and rich in fish and possible oil and gas reserves.

DUTERTE TRIP TO CHINA TO INCLUDE DISCUSSION ON HAGUE ARBITRATION

Philippine President Rodrigo Duterte is preparing to make his fifth visit to China later this month during which he says he will finally raise the result of the 2016 Hague arbitration case on China's South China Sea claims amid a new spike in tensions. 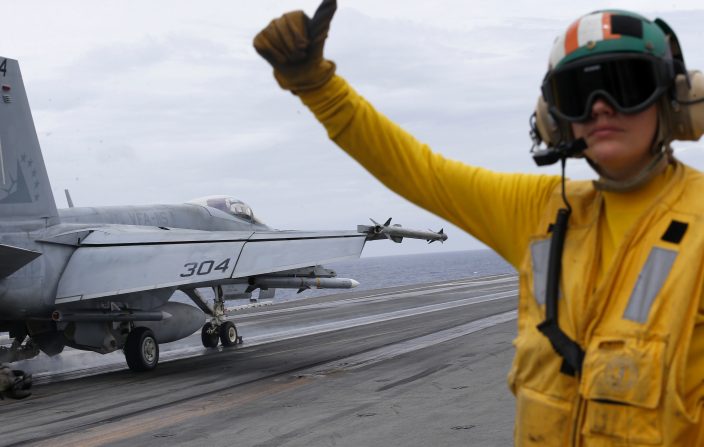 FILE - In this Aug. 6, 2019, file photo, a U.S. fighter jet takes off from the U.S. aircraft carrier USS Ronald Reagan for their patrol at the international waters off the South China Sea. The U.S. Air Force’s chief of staff says there are no plans to reduce freedom of operations in the South China Sea that China points to as the source of increased tensions in the region. (AP PhotoBullit Marquez, File)

Duterte, who has sought warmer ties with Beijing, has long been criticized by nationalists and left-wing groups for not immediately demanding Chinese compliance with the ruling from an international arbitration panel that declared China's claims to virtually the entire South China Sea invalid under the 1982 U.N. Convention on the Law of the Sea.

China refused to participate in the arbitration case that Duterte's predecessor, Benigno Aquino III, initiated, and has ignored the resulting ruling.

Yet the 74-year-old leader is under increasing pressure from the Philippine public and within his own government to call China out on its increasingly aggressive maneuverings in the area. 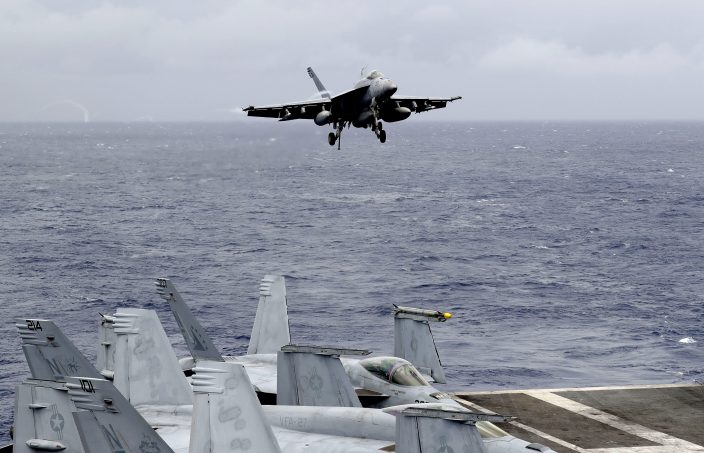 FILE - In this Aug. 6, 2019, file photo, a U.S. fighter jet prepares to land on the U.S. aircraft carrier USS Ronald Reagan following their patrol at the international waters off the South China Sea. The U.S. Air Force’s chief of staff says there are no plans to reduce freedom of operations in the South China Sea that China points to as the source of increased tensions in the region. (AP PhotoBullit Marquez, File)

Defense Secretary Delfin Lorenzana asked Beijing this month to explain the activities of Chinese research vessels and warships in what the Philippines claims as its waters, and accused China of "bullying."

Lorenzana said that China did not ask for permission to send several warships through the Sibutu Strait at the southern tip of the Philippine archipelago on four occasions between February and July. He said two Chinese research ships have also been operating in the Philippines' exclusive economic zone.

The U.S. Air Force's chief of staff says there are no plans to reduce freedom of operations in the South China Sea that China points to as the source of increased tensions in the region.

Speaking to reporters in Manila on Friday, Gen. David Goldfein said, "There will be no let-up in our willingness or our ability to fly or sail where we need to and when we need to."

"That's our commitment to the region," Goldfein said.

The U.S. is committed to keeping the global commons open for all, whether at sea or in the air and, increasingly in space and cyberspace, the general said. Such use has to adhere to international rules of order, "So, anybody in the region that violates those, it's concerning," he said.

While the U.S. rarely announces such missions, known as "FONOPS," the tempo of such operations is believed to have increased in recent months, angering China. Beijing says they endanger safety when sailing close to Chinese islands — in deliberate defiance of Chinese territorial claims — and regularly sends aircraft and vessels to see them off.

That's created fears of an open confrontation, despite the sides having signed agreements on how to avoided unexpected encounters in the air and on the sea.

The U.S. Navy and Coast Guard launched joint drills with Malaysia's navy last week, while U.S. forces joined with those from Australia, Canada and New Zealand for training in the U.S. territory of Guam.

The drills underscore the degree of U.S. involvement in the region, both with its treaty partners and traditional friendly nations, amid concerns over China's growing presence.

New Zealand, the U.S., Canada and Australia are members of the "Five Eyes" security alliance, while Malaysia's South China Sea territorial claims overlap with those of China.

The 7th Fleet said in a news release that the Malaysian and U.S. navies have engaged for 25 years to "enhance mutual capabilities in ensuring maritime security and stability," but this year's drills mark the first involvement of the Malaysian Maritime Enforcement Agency and U.S. Coast Guard.

The at-sea training portion will include "hands-on training in visit, board, search and seizure mobile dive and salvage, a gunnery exercise, maritime patrol operations and replenishment at-sea," The 7th Fleet said. Malaysian vessels taking part include the navy's most modern British and German-built surface combatants.

Chris Mueller scored twice in the ...