The Indian Space Research Organization said it successfully maneuvered Chandrayaan, the Sanskrit word for "moon craft," into lunar orbit, nearly a month after it left Earth. The mission is led by two female scientists.

Chandrayaan will continue circling the moon in a tighter orbit until reaching a distance of about 100 kilometers (62 miles) from the moon's surface. 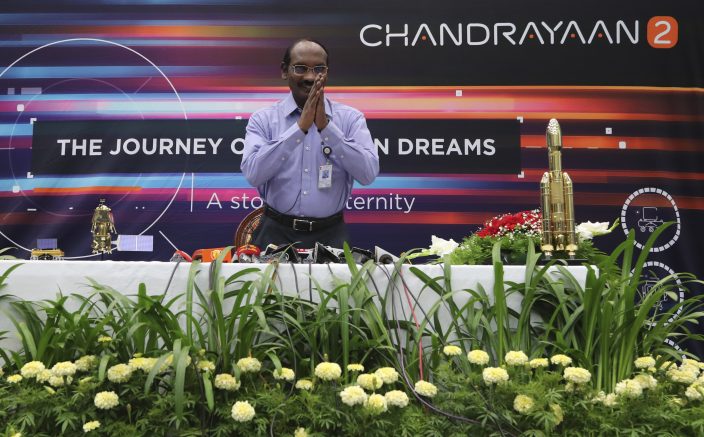 Indian Space Research Organization (ISRO) Chairman Kailasavadivoo Sivan greets journalists as he arrives for a press conference at their headquarters in Bangalore, India, Tuesday, Aug. 20, 2019. India has successfully launched a spacecraft into lunar orbit that aims to land on the far side of the moon and search for water. ISRO said Tuesday that it has maneuvered Chandrayaan, the Sanskrit word for “moon craft,” into lunar orbit. (AP PhotoAijaz Rahi)

The lander will then separate from the orbiter and use rocket fuel to brake as it attempts India's first moon landing on a relatively flat surface between two craters in the south polar region on Sept. 7.

The success rate of landing on the moon is only 37%, ISRO chairman Dr. K. Sivan said in a news conference. When the semi-autonomous lander decides to land on its own, "it'll be a mix of feeling, of happiness and tension and more anxiety," Sivan said.

A rover will study permanently shadowed craters that are thought to contain 100 million tons of water, deposits that were confirmed by a previous Indian moon mission.