Who knew a "peace park" could be so contentious?

The Pacifist Memorial in the Boston suburb of Sherborn has been forced to take down a United Nations flag after residents objected. Memorial founder Lewis Randa removed the flag and its flagpole last week because residents of the luxury townhome development where it's now located say the items violated their property agreement.

But Randa says he and others were simply restoring a flag, which he concedes was not part of the original memorial but had flown for decades on the grounds. He said it's "inexcusable" that the UN flag isn't allowed when just next door, at the town's historic cemetery, a U.S. flag flies beside a war memorial honoring the town's fallen soldiers. 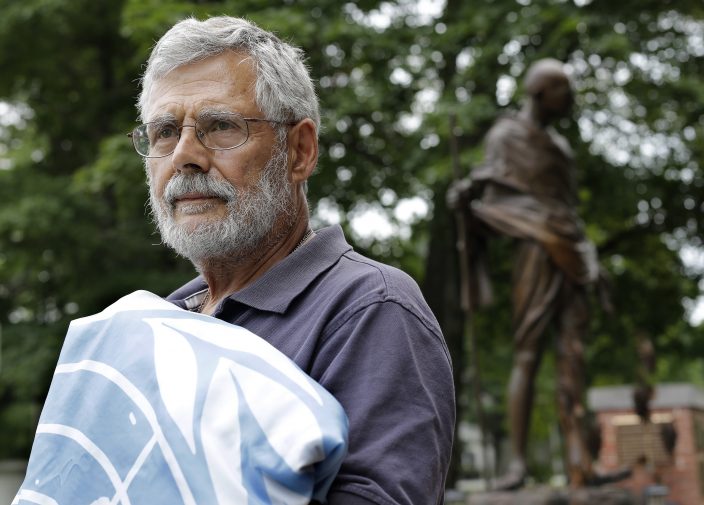 In this Wednesday, Aug. 21, 2019 photo, Lewis Randa, of Duxbury, Mass., holds a United Nations flag while standing near a bronze statue of Indian independence leader Mahatma Gandhi, behind right, at the Pacifist Memorial, in Sherborn, Mass. Randa says in mid-August of 2019 he removed the flag because owners of a condo association, who now own the land on which the Pacifist Memorial is located, argue it violates their property agreement. Randa founded the memorial in 1994. (AP PhotoSteven Senne)

"It is clear that the animosity felt by those who have long opposed the presence of the Pacifist Memorial in Sherborn is what is generating the opposition," Randa said. "They claim it has nothing to do with the fact that it is a UN flag, but we all know if it was the U.S. flag, no one in their right mind would demand that it be taken down."

Loretta Heuer, who chairs the Abbey Road Condominium's board of trustees, said the issue isn't about the flag but about respecting their property rights.

Tucked in a small, historic town about 25 miles (40 kilometers) west of Boston, the land had been the longtime home of the Peace Abbey, a multifaith retreat center Randa founded in 1988 that gained notoriety for its curious memorials to animal rights and nonviolence. Over the years, boxer Muhammad Ali and the poet Maya Angelou paid visits and Yoko Ono and other celebrities provided financial support.

But, facing mounting debts, Randa sold the 2.5-acre (10,000-square meter) property to a local developer in 2012. As part of the $1 million deal, the developer agreed to grant public access to the memorial site. That agreement, however, doesn't give Randa the right to add new or temporary fixtures, such as the flag and a small wood stove that recently appeared on the site, the Abbey Road Condominium Trust argues.

"That's our front lawn," Heuer said Thursday as she and other neighbors sat on a front porch looking out at the memorial. "No one can just decide to put something on our front lawn."

The Pacifist Memorial, where Randa recently raised the UN flag, is the main feature of the site. It centers around a towering bronze statue of Indian independence leader Mohandas K. Gandhi, also known as the mahatma or "great soul." Low brick walls radiating from it are lined with bronze plaques honoring St. Francis of Assisi, Mother Teresa, Martin Luther King Jr., John Lennon and other icons of peace and nonviolence.

Behind that is the "sacred cow" memorial, a massive bronze likeness of a cow named Emily, who took refuge on the grounds after escaping from a slaughterhouse. The memorial recognizes the animal rights movement and also serves as the final resting place for the beloved cow, who died in 2003.

Elsewhere, the cremated remains of some conscientious objectors are interred, and other markers recognize victims of violence and war.

For now, Randa says he has no plans to restore the UN flag. It had flown at half-staff for 30 years elsewhere on the land to recognize the "global efforts of the nations of the world to live in peace," according to a sign affixed to its flagpole.

But he's asked the condo association to consider amending the easement to allow it to become a permanent fixture once again. He hasn't heard a response.

US moves forward with plan to end wild bird protections