Just like many tennis fans, Coco Gauff's father expects a lot from his precocious, 15-year-old daughter.

Makes sense, given the way she swings a racket on a tennis court and handles herself away from one.

"Even after I win a tournament, he'll let me celebrate, but then he's like, 'It's back to work.' And I understand why," Gauff said. "Because, like, I mean, it's just one tournament of many." 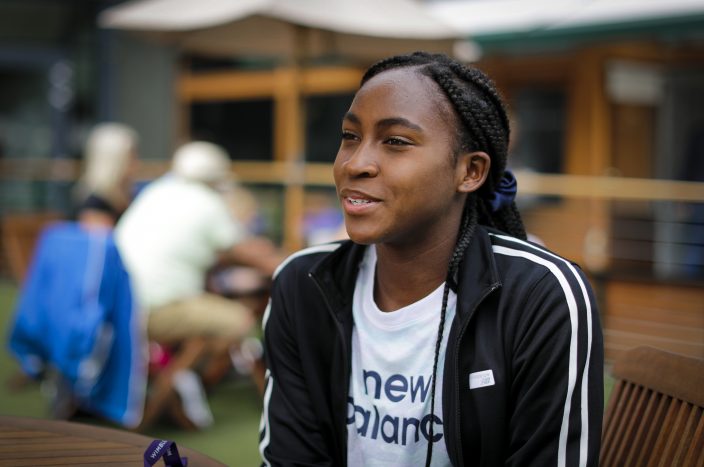 FILE -In this July 9, 2019, file photo, United States' Cori "Coco" Gauff speaks to The Associated Press during the Wimbledon Tennis Championships in London. Gauff is just 15 but got into the main draw for the U.S. Open, which starts next week, thanks to a wild-card invitation after her surprising run to the fourth round at Wimbledon. She is one of a group of young Americans making strides in tennis lately. (AP PhotoBen Curtis, File)

Next up for Gauff is the U.S. Open, which starts Monday, and she's in the main draw by virtue of a wild-card entry received after making quite a run at Wimbledon. First, Gauff became that venerable event's youngest qualifier in history. Then she wowed the world by stunning Venus Williams. Next came a victory over a 2017 All England Club semifinalist. That was followed by a comeback victory, erasing two match points on Centre Court, to reach the fourth round and make her the story of the fortnight.

"There's some 15-year-olds, like me, who wouldn't know what to do at Wimbledon," said Williams' younger sister, Serena. "Then you have a 15-year-old like Coco, who knows what to do."

There are those who've wondered what will happen to American women's tennis once the Williams siblings leave the scene with their as-of-now 30 Grand Slam singles titles. But there seems to be plenty to look forward to, because Gauff is hardly the only young U.S. pro making strides lately. 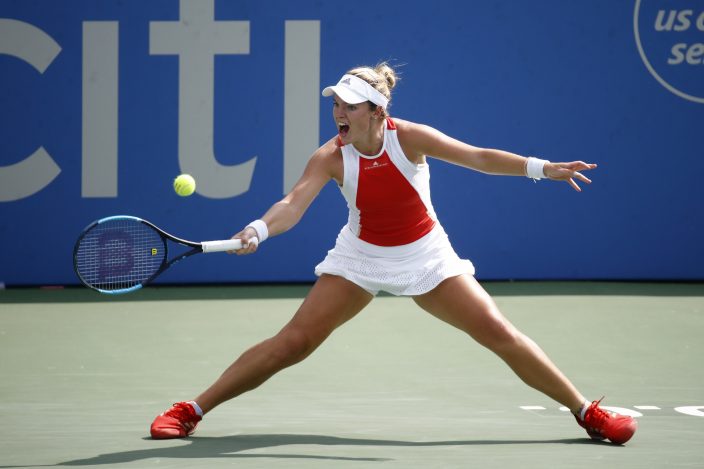 FILE - In this Aug. 3, 2019, file photo, Caty McNally returns the ball during a semifinal match against Camila Giorgi, of Italy, at the Citi Open tennis tournament in Washington. McNally, who is only 17, teamed with Coco Gauff to win the U.S. Open junior doubles title a year ago and again to win a WTA doubles title at the Citi Open this August. Like Gauff, McNally received a wild-card invitation for the main draw of the U.S. Open, which starts next week. (AP PhotoPatrick Semansky, File)

Amanda Anisimova (who will miss the U.S. Open because of her father's recent death) reached the French Open semifinals in June at age 17. Sofia Kenin, 20, eliminated Serena Williams in Paris and just picked up hard-court tuneup wins against No. 1s Ash Barty and Naomi Osaka.

Caty McNally, 17, teamed with Gauff to win the Citi Open doubles title in August, also reached the semifinals in singles there, and she, too, is headed to Flushing Meadows thanks to a wild card.

FILE - In this June 1, 2019, file photo, Sofia Kenin, of the United States, clenches her fist after scoring a point against compatriot Serena Williams in the last game of the second set during their third round match of the French Open tennis tournament at the Roland Garros stadium in Paris. Kenin, who is 20, stunned Serena Williams at the French Open this year and now is ranked a career-best No. 20. She is one of a group of promising young Americans in tennis playing in the U.S. Open, which starts next week. (AP PhotoChristophe Ena, File)

The female set is drawing more attention, though, and McNally doesn't think the recent surge is a coincidence.

"When one person does well, it just kind of pushes the other people," she said, "and shows them that they can be in the same place and do the same thing."

Here's a quick look at Gauff and other young Americans:

From: Born in Florida; raised in Georgia; based in Florida

What She Said: "I'm not going to ... take it easy on myself because of this recent success. I think I'm just going to keep my mind focused, because I can see how easy it can get to say, 'Oh, I already did this at 15, so I can maybe lay it back.'" — Gauff on wanting to improve after Wimbledon.

What They Said: "Terrific ingredients to be a future champion." — Tracy Austin, who won the first of her two U.S. Open titles at age 16.

From: Born and based in Ohio

What She Said: "It just shows me — because I've played really close with her and I've had chances to win — that I'm right there, too, and I can do the same thing." — McNally on seeing what Gauff did at Wimbledon.

What They Said: "More proof of why I believe the future of the sport is really incredibly promising." — Mark Ein, who manages the Citi Open.

From: Born in New Jersey; based in Florida

What She Said: "I actually kind of miss juniors, but, I mean, this is a new phase. It's my first year having a full schedule on tour. It's definitely something that I'm getting used to." — Anisimova on life as a pro.

What They Said: "She was pretty calm. She showed that she's able to do good things — and big things." — Halep, after losing in straight sets to Anisimova.

From: Born in Russia; based in Florida

What She Said: "I have always had the belief. That's who I am. ... I like to get the crowd going. I like to pump myself up." — after her straight-set victory over Williams.

What They Said: "She's a machine, I'm telling you. ... I don't think she ever misses a ball." — Andrea Petkovic, a former top-10 player who has been Kenin's doubles partner.