Some of the mystical blue-green lakes of the Lacandon jungle in southern Mexico are drying up this year, the result of what experts say is an extended drought and rising temperatures in the region.

About 350 Lacandones, an indigenous group that still uses traditional dress of long hair and white cotton tunics, depend on tourism, fish and water from the lake and 20 other jungle lagoons nearby for their livelihood. 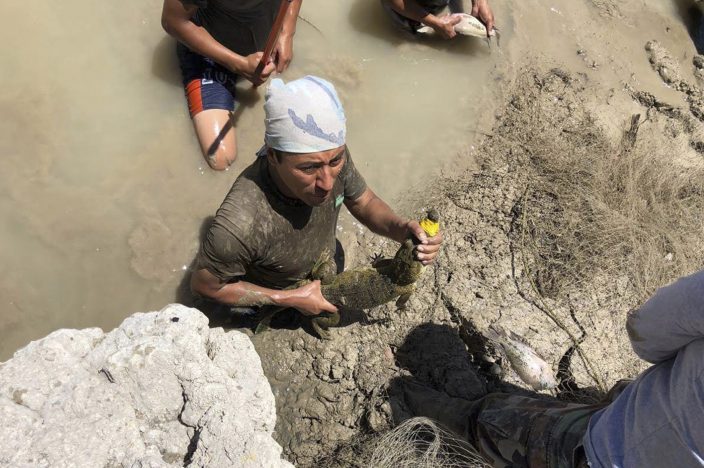 In this photo provided by Mexico's National Commission for Protected Nature Areas, people work to rescue a young crocodile and other wildlife from the receding waters of the Metzabok Lagoon in the Lacandon jungle of Chiapas State in southern Mexico, in the first half of August, 2019. In recent days, indigenous Lacandones, who depend on tourism, fish and water from the jungle lakes, worked furiously with biologists to capture and transfer crocodiles, fish and turtles from the dried-up lake to nearby ones that still have water. (CONANP via AP)

In recent days they worked with biologists to capture and transfer crocodiles, fish and turtles from the dried-up lake to those nearby that still have water. The area is part of a nature preserve known as Naha-Metzabok, and the Lacandones have preserved the surrounding jungle for decades by avoiding the slash-and-burn agriculture and cattle ranching.

Some of the older Lacandones remember that the Metzabok lake (the name means "The god of thunder" in the Maya language) had dried up once ago, in the 1950s.

But experts worry that such episodes will become more frequent as rainfall declines and peak temperatures rise in the area, located just a few dozen miles from the Guatemalan border. 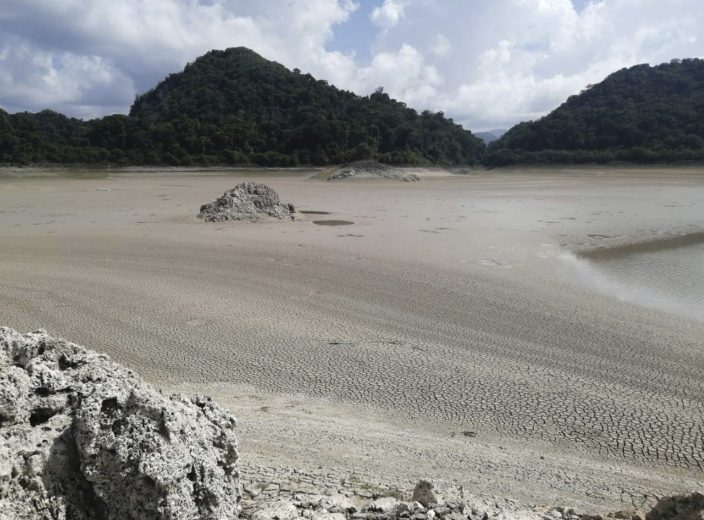 In this photo provided by Mexico's National Commission for Protected Nature Areas, cracked mud is seen in the drying lake bed of the Metzabok Lagoon, in the Lacandon jungle of Chiapas State in southern Mexico, in the first half of August, 2019. During the month of August, the Metzabok lake, which normally covers 220 acres (89 hectares), dried up completely, leaving cracked mud where the surrounding jungle used to reflect in the translucent waters and Lacandon Indians traveled by canoe.(CONANP via AP)

Mexico's National Water Commission lists most of the Lacandon jungle as being in a "moderate drought" situation, but some areas whose waters normally feed the lagoons are listed as "severe to extreme" drought.

Since the jungle lakes are fed by groundwater flows, not rivers, the situation may take some time to recover.

But it is not just Metzabok lake that has suffered.

Adrián Méndez Barrera, a biologist who serves are regional director for Mexico's National Commission for Protected Nature Areas, said he knowns of six lagoons outside the nature reserve that have dried up.

"Rainfall over the last four years has been down by about 30%," Méndez Barrera said. "On the other hand, we have seen average maximum temperatures rise from 30 degrees to 34 degrees (86 to 93 Fahrenheit). These two factors have a combined effect."

"The lakes are not very deep," he noted, "and we are seeing a high level of evaporation."

The better-known Lagunas de Montebello lakes are also suffering; the main lake in that area — also located in southern Chiapas state — is 60 meters (yards) below its average high-water mark this year.

"I don't know if the lakes are going to recover, or if this (drought) is going to become a more frequent and more widely-seen experience," Méndez Barrera said.

A white woman who called the polic ...