India's government on Saturday barred several opposition leaders from visiting Indian-administered Kashmir to assess the situation created by a massive security crackdown in the region that started early this month.

On the Pakistani side of Kashmir, police stopped hundreds of journalists from symbolically trying to cross the highly militarized border into Indian-controlled Kashmir. 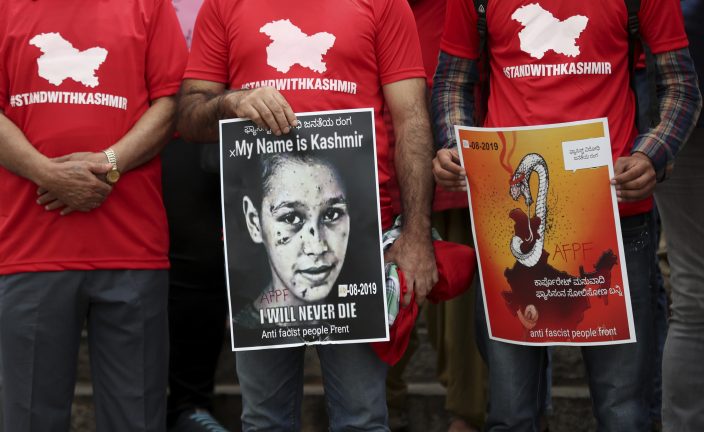 Kashmiris living in Bangalore hold placards asking end of the communication blockade in Indian controlled Kashmir during a protest in Bangalore, India, Saturday, Aug. 24, 2019. On Aug. 5, Prime Minister Narendra Modi's Hindu nationalist-led government revoked Muslim-majority Kashmir's decades-old special status guaranteed under Article 370 of India's Constitution and sent thousands of troops to the region, which is split between archrivals Pakistan and India and claimed by both in its entirety. (AP PhotoAijaz Rahi)

The opposition leaders included Rahul Gandhi of the Congress party, Sitaram Yechury of the Communist Party of India (Marxist), Sharad Yadav of Janata Dal (United) and Majeed Memon of the National Conference.

Authorities on Friday had advised them against visiting the region, citing a sensitive law and order situation. But there was no official comment on Saturday on disallowing the opposition leaders from visiting Srinagar and other parts of the region.

"We are not going to disturb peace there," Majeed Memon of the Nationalist Congress Party told reporters in New Delhi before boarding the flight to Srinagar.

Ghulam Nabi Azad, a Congress party leader, said part of the reason for the visit was to look into the government's claims that normalcy is returning to the region. "We are going to assess the situation there and find out the ground reality," he said.

The changes in Indian-controlled Kashmir's status allow anyone to buy land in the territory, which some Kashmiris fear could mean an influx of Hindus who would change the region's culture and demographics. 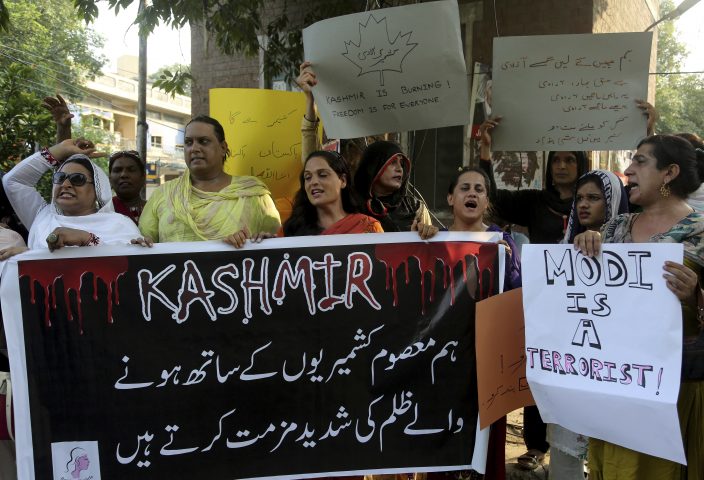 Indian authorities are gradually easing restrictions, allowing some businesses to reopen in Srinagar and other places. Landline phone service has been restored in some areas. Officials also say they have opened grade schools, but both student and teacher attendance has been sparse.

The journalists' leader, Zafeer Baba, said the protest was an attempt to report on the situation in Kashmir. Journalists from Islamabad and other cities also traveled to Muzaffarabad to take part in the protest.

Local Kashmiris joined the journalists' protest, chanting slogans against what they said was "Indian oppression" and in solidarity with Kashmiris.

Pakistani police officer Arshad Naqvi said the journalists' vehicles were stopped around 7 kilometers (4 miles) from the Line of Control, which divides the Himalayan region.

Kashmir is divided between Pakistan and India but claimed by both in its entirety. The nuclear-armed archrivals have fought two of their three wars over Kashmir since gaining independence from British rule in 1947.