Hundreds of bicyclists have been caught with their pants down — and their shirts and underwear off, too.

The cyclists gathered in a Philadelphia park on Saturday to disrobe before saddling up and setting off on the annual Philly Naked Bike Ride.

About 3,000 riders pedal a 10-mile (16-kilometer) course around the City of Brotherly Love while taking in sights including Independence Hall and the Liberty Bell, organizers say. Some riders wear their birthday suits while others flaunt their underwear or sport just a splash of body paint and glitter. 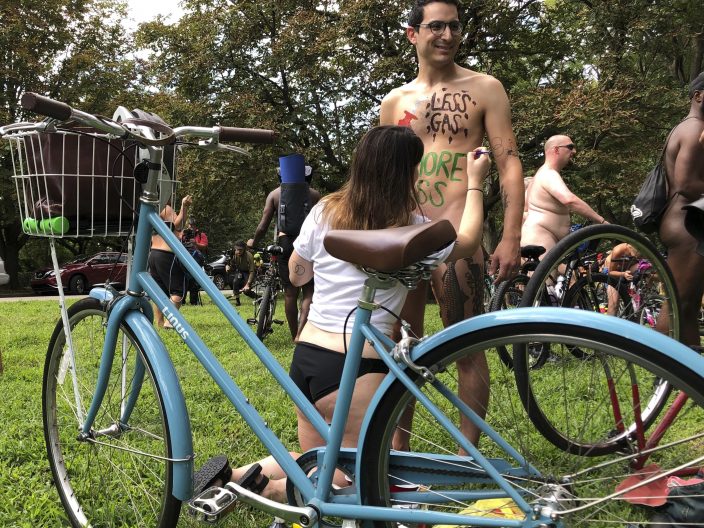 Nude bicyclist Oren Roth-Eisenberg has a message opposing fossil fuel consumption painted on his torso by his wife before the start of the Philly Naked Bike Ride in Philadelphia on Saturday, Aug. 24, 2019. (AP PhotoDino Hazell)

Melanie and James O'Connor, who painted each other's nude body in multiple colors, were riding for the seventh time.

"We run around naked a lot," he said.

The couple met at the 2012 ride and have been together since.

"I took a picture of him the moment we met, and seven years later we're still naked," she said.

The ride is to promote positive body image, advocate for the safety of cyclists and protest dependence on fossil fuels, a major issue for Oren Roth-Eisenberg, who participates every year.

"I call it my Christmas, the happiest day of the year," he said, while having a message advocating for less gas consumption painted on his torso by his wife. "It's the intersection of the happiest day and the most important thing."

The Philly Naked Bike Ride used to be held in September but was moved up to August because the nude and scantily clad participants complained about chilly weather. It was held

Officer trying to rescue kitten finds a bobcat instead