U.S. lobster exports to China have fallen off a cliff this year as new retaliatory tariffs shift the seafood business farther north.

China, a huge and growing customer for lobster, placed heavy tariffs on U.S. lobsters — and many other food products — in July 2018 amid rising trade hostilities between the Chinese and the Trump administration.

Meanwhile, business is booming in Canada, where cargo planes are coming to Halifax, Nova Scotia, and Moncton, New Brunswick, to handle a growing bump in exports. Canadian fishermen catch the same species of lobster as American lobstermen, who are based mostly in Maine. 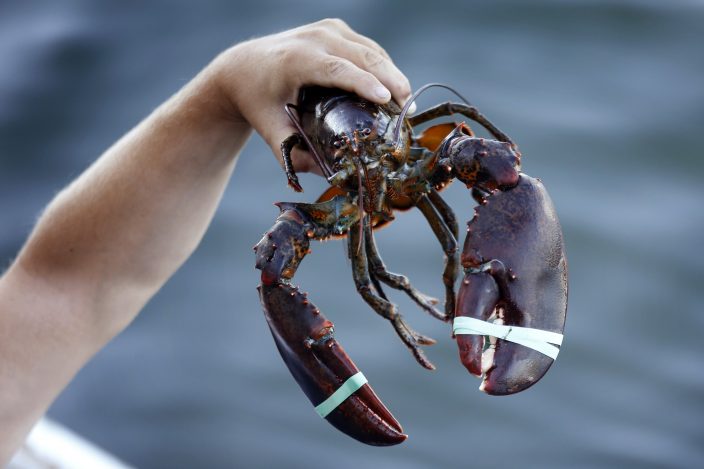 In this Saturday, Aug. 24, 2019, photo a 3.5 pound lobster is held by a dealer at Cape Porpoise in Kennebunkport, Maine. America's lobster exports to China have plummeted this year as new retaliatory tariffs have shifted business to Canada. (AP PhotoRobert F. Bukaty)

The loss of business has brought layoffs to some Maine businesses, such as The Lobster Co., of Arundel, where owner Stephanie Nadeau has laid off half the 14 people she once had working in wholesale.

Lobster prices paid by American consumers have remained fairly steady during the trade dispute, and there remain many buyers for U.S. lobster. But the loss of China as an overseas market is happening at the end of a decade in which the U.S. seafood industry has experienced exponential growth in lobster exports to the country. The U.S. exported about 800,000 pounds of lobster in China in 2010 and more than 20 times that last year.

The American lobster industry is looking to open up new domestic and international markets to make up for the loss of China, said Marianne LaCroix, who directs the Maine Lobster Marketing Collaborative. Maine lobsterman Brian Rapp will attend a trade show in Hong Kong and a trade mission to Dubai in September to promote U.S. lobster, she said.

"China is so large that you have to look at a number of new markets to replace that business," LaCroix said.

In Canada, the boost to business has helped the industry but also led to uncertainty about its future, said Geoff Irvine, executive director of the Lobster Council of Canada.

The American and Canadian lobster industries overlap, with some businesses operating on both sides of the border, and it's more beneficial to the lobster industry at large for trade to go on unimpeded, he said.

"Whenever there's any kind of uncertainty, it makes people worry," Irvine said. "Everybody would like to see the entire lobster industry open and free."

Whether inmate mentally fit for execution could cause d ...

Danny Duffy to start opening day for Royals against Ind ...