Jimmie Johnson made one thing perfectly clear when he walked out of the Indianapolis Motor Speedway's infield medical center.

He might be out of the playoffs but his season is not over.

"I think everybody can see the performance is on its way up," Johnson said Sunday after a late crash ended his last-ditch hope of making the 16-car field. "Just keep drilling that and trying to get ourselves higher in points and then also back to victory lane." 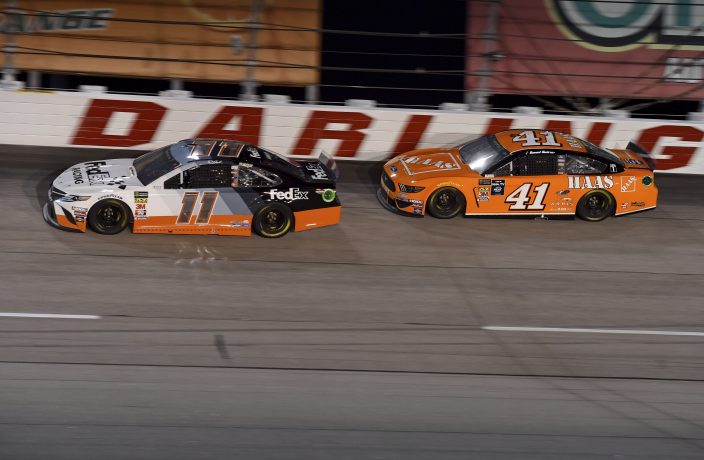 It certainly would be a start.

Johnson hasn't won an official Cup race since June 2017 at Dover, one of the primary reasons he must wait until 2020 to resume the chase for a record-breaking eighth series title. He has finished outside the top 15 in seven of the last eight races and in the 30s four times during the same span.

Of course, Johnson can always use more time getting acclimated to his second crew chief of the season, Cliff Daniels.

Still, that doesn't make it any easier to accept the results for Johnson — or anyone else left out.

"It wasn't for a lack of effort," Daniel Suarez said. "We just didn't have things play in our way. In the last pit stop cycle, the caution came out after we pitted (or) one lap after, and that was important. That was not a position that we wanted to be in."

Suarez's first big hit came when the No. 41 Ford brushed the wall, forcing him to pit just 12 laps into the Brickyard 400. He spent the rest of the race trying to work his way back up even when he thought others, such as Matt Tifft, got in his way. Tifft was knocked out of the race with 13 laps to go after hitting the wall in the first turn.

Suarez contended Tifft, whose postseason fate was sealed long before the Brickyard, blocked his faster car for at least four laps before the crash — costing him an opportunity to pick up precious spots and points.

"We're still racing," Suarez said. "I feel like as a team we have to keep getting better. Yeah, we're not in the playoffs, but we have plenty of things to (clean) up. If we can win a race that would be like making the playoffs or even better."

Then there's Bubba Wallace, who flirted with the win. His only previous career top-five finish came in the 2018 Daytona 500 when he wound up second to Austin Dillon. Wallace's best finish this season had come at Bristol last month when he was 14th and well out of playoff contention.

Somehow, as the laps piled up, Wallace continued to move up. He finished a distant third behind race winner Kevin Harvick and runner-up Joey Logano, allowing Newman to take the final playoff spot.

Unlike Johnson and Suarez, the 25-year-old Wallace was beaming with pride.

"It's a confidence booster, a mentality booster, knowing we can run with these guys when all is on the line," Wallace said. "We needed this. We needed this weekend."

And now Wallace, Johnson, Suarez and all the other drivers who failed to make the playoff will now adjust their championship plans and focus on building momentum that could put them back in playoff position next year.

"It's pretty impressive the run we've been on, to be in the playoffs for many consecutive years. I'm not sure who is close," Johnson said. "Sure, we wanted to continue it, but the goal is to win a race. The team is getting stronger each and every week. Cliff Daniels is doing an amazing job. We're ready to roll. We'll dust ourselves off and go to Vegas and try to get a trophy."

Rickie Fowler's putt was the lengt ...