FIBA will look at adjusting travel demands on teams at the next World Cup, after this tournament in China led to many complaints about the distances that nations participating in the knockout stages had to cover without much time to prepare for games.

Some teams faced major travel challenges at the tournament's most crucial time. And multiple nations argued that the semifinal-game winners — Spain and Argentina — benefited from having two days off before those matchups, while semifinal losers Australia and France had only one day.

FIBA contended that playing a tournament-record 92 games in 16 days across eight cities meant some logistical headaches were inevitable. And with the next World Cup in 2023 set to be spread out over three countries — Indonesia, Japan and the Philippines — more challenges are likely then as well. 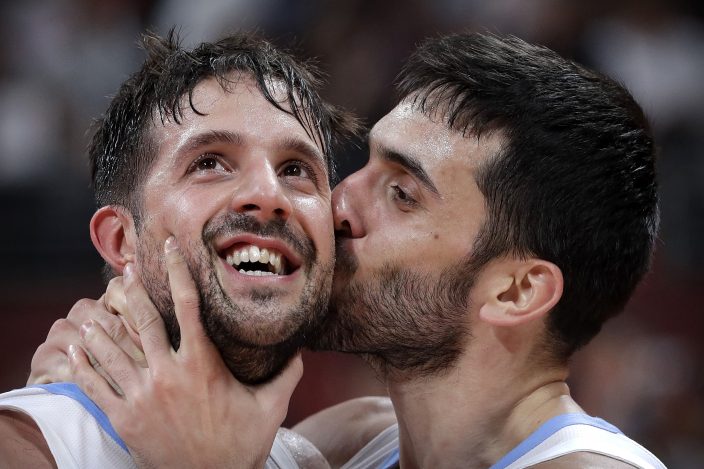 Facundo Campazzo of Argentina, right, kisses teammate Nicolas Laprovittola as they celebrate after beating France in their semifinal match against in the FIBA Basketball World Cup at the Cadillac Arena in Beijing, Friday, Sept. 13, 2019. (AP PhotoMark Schiefelbein)

"After having experienced it, on paper sometimes it looks perfect," FIBA Secretary General Andreas Zagklis said. "Then you see the imperfect aspects of it. These are the things we're ready to improve in the future."

Serbia coach Sasha Djordjevic, who resigned from his national team on Saturday, said the rest factor should be equal going forward. He also thought cramming so many games into such a short time span affected the quality of play as the tournament went along.

In other matters addressed by Zagklis on Sunday:

Zagklis was asked his reaction to many top NBA players not making the trip to China for the World Cup, which is one of the reasons why the U.S. — which had won the last two titles at the event — finished only seventh in China, its lowest finish ever at a World Cup or Olympic event.

"It's not our job to put together the roster of any of the 32 teams," Zagklis said. "We set the stage, the conditions for all the teams and then each national federation has its own way of approaching the players and having them commit to play for the national team."

Zagklis also said many nations, with the exception of the U.S. and Canada, brought most of their top NBA players.

Australia center Andrew Bogut complained loudly and profanely after his team's semifinal loss to Spain, calling FIBA a "disgrace" and alleging that a call late in regulation against the Boomers cheated them of a spot in the gold-medal game.

Australia lost to Spain in double overtime. Bogut played in Sunday's bronze-medal game, which Australia lost to France, but FIBA will still complete an inquiry into what he said and may take disciplinary action.

There will be 24 teams competing next year for the last four available spots in the men's basketball tournament at the 2020 Tokyo Olympics. The U.S., Spain, France, Argentina, Nigeria, Iran, Australia and the host Japanese have already grabbed eight of the 12 slots in the field.

Zagklis said FIBA doesn't plan to take long before announcing dates and sites for the four six-team tournaments that will decide those spots. The winner of each of those tournaments qualify for Tokyo.

Interested nations will have the right to bid to host one of the qualifiers, and will have to pay a hosting fee if selected.

Zagklis said the tournaments will take place on multiple continents, since both FIBA and the International Olympic Committee want the game exposed to as many parts of the world as possible.