A Parliament member who is a senior pro-India politician in Indian-controlled Kashmir was arrested Monday under a controversial law that allows authorities to imprison someone for up to two years without charge or trial.

Farooq Abdullah, 81, who also was the former chief minister of Jammu and Kashmir, was arrested at his residence in Srinagar, the summer capital of the disputed Himalayan region.

"We have arrested him, and a committee will decide how long the arrest will be," said Muneer Khan, a top police official. 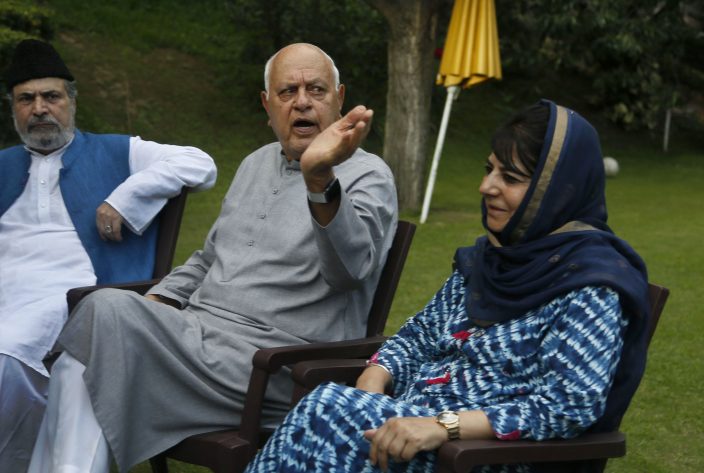 FILE - In this Aug. 4, 2019, file photo, National Conference president Farooq Abdullah, center, gestures during an all parties meeting in Srinagar, Indian controlled Kashmir. Abdullah, 81, also the former chief minister of Jammu and Kashmir, was arrested Monday under the Public Safety Act at his residence in Srinagar, the summer capital of the disputed region. (AP PhotoMukhtar Khan, File)

Abdullah is the first pro-India politician who has been arrested under the Public Safety Act, under which rights activists say more than 20,000 Kashmiris have been detained in the last two decades.

Amnesty International has called the PSA a "lawless law," and rights groups say India has used the law to stifle dissent and circumvent the criminal justice system, undermining accountability, transparency, and respect for human rights.

Abdullah's residence was declared a subsidiary jail and he was put under house arrest on Aug. 5 when Indian Prime Minister Narendra Modi's Hindu nationalist-led government in New Delhi stripped Jammu and Kashmir of semi-autonomy and statehood, creating two federal territories.

Thousands of additional Indian troops were sent to the Kashmir Valley, already one of the world's most militarized regions. Telephone communications, cellphone coverage, broadband internet and cable TV services were cut for the valley's 7 million people, although some communications have been gradually restored.

On Aug. 6, Indian Home Minister Amit Shah denied to the lower house of Parliament that Abdullah had been detained or arrested.

"If he (Abdullah) does not want to come out of his house, he cannot be brought out at gunpoint," Shah said, when other parliamentarians expressed concern over Abdullah's absence during the debate on Kashmir's status.

Many anti-India protesters as well as pro-India Kashmiri leaders have been held in jails and other makeshift facilities to contain protests against India's decisions, according to police officials.

Kashmir's special status was instituted shortly after India achieved independence from Britain in 1947. Both India and Pakistan claim Kashmir in its entirety, but each controls only part of it.

India has often tried to suppress uprisings in the region, including a bloody armed rebellion in 1989. About 70,000 people have been killed since that uprising and a subsequent Indian military crackdown.

The Justice Department filed an em ...

The wife of a French bus driver sa ...