The leader of South Korea's biggest opposition party on Monday became the latest politician to shave their heads to protest President Moon Jae-in's appointment of a key political ally as justice minister despite allegations of academic fraud and financial crimes surrounding his family.

The controversy surrounding Cho Kuk, a law professor and Moon's former secretary for civil affairs, has stained the president's reformist image and caused a slide in his approval ratings.

Amid ceaseless camera clicks, an official from the conservative Liberty Korea Party shaved off party chairman Hwang Kyo-ahn's hair in front of Seoul's presidential palace, where Hwang called for Moon to sack Cho as justice minister. 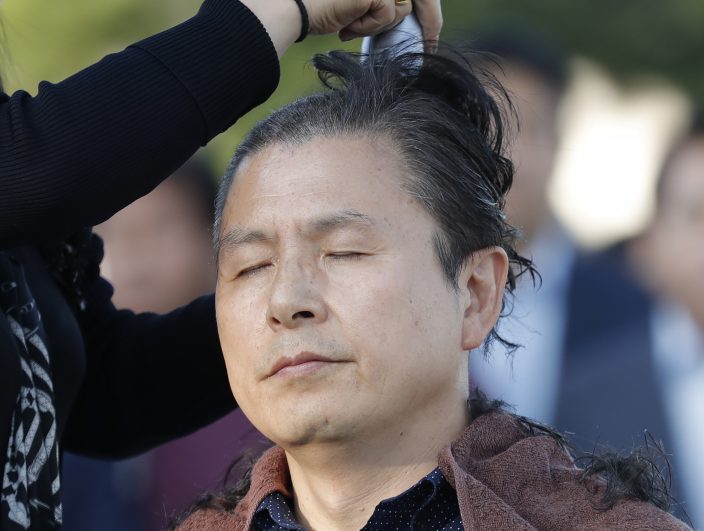 Female lawmakers Park In-sook of the LKP and independent Lee Un-ju also shaved their heads in past weeks calling for Cho's dismissal.

"This is my warning to President Moon Jae-in: Do not go against the will of the people any further," said the buzz-cut Hwang, who served as prime minister for former conservative President Park Geun-hye before she was ousted from office and imprisoned in March 2017 over a corruption scandal.

"This is my ultimatum to Cho Kuk: Step down voluntarily from your post and receive an investigation from prosecutors," Hwang added, receiving applause from LKP lawmakers, who were planning to protest in front of the Blue House until midnight.

The protest came hours after state prosecutors requested a warrant to formally arrest a relative of Cho, who was detained on Saturday over suspicions of fraud, embezzlement and attempting to destroy evidence linked to his management of a private equity fund financed by Cho's family.

There are also allegations that Cho's daughter received special treatment in her admissions to a top university in Seoul and a medical school in Busan, which struck a nerve in a country where teenagers toil in hyper-competitive school environments because graduating from elite universities is seen as crucial to career prospects.

Prosecutors also have indicted Cho's wife, Chung Kyung-shim, on suspicions of manipulating an award issued to her daughter from a university in the southern city of Yeongju where she works as a professor.

Cho, who for years built an image as a reform-minded anti-elitist, denied legal wrongdoing during an intense 11-hour news conference with reporters and a hearing to lawmakers earlier this month.

Moon appointed Cho as justice minister last week, saying it would set a "bad precedent" if he withdraws a ministerial nominee based on unproven allegations.

The controversy surrounding Cho has cut into the approval ratings of Moon, who also faces pressure over a decaying job market, an uphill trade war with Japan and a fragile diplomacy with nuclear-armed North Korea that is beginning to show signs of falling apart.

In a poll of some 1,000 South Korean adults by Gallup Korea released earlier this month, about 49% of the respondents said they disapproved of Moon's performance in state affairs, compared to 44% who thought he was doing a good job. Nearly 60% of the respondents opposed Cho as justice minister. The margin of error was plus or minus 3.1 percentage points.

The Supreme Court ruled Thursday i ...