Only three rounds into his Serie A return, new Inter Milan coach Antonio Conte is already fed up with the local media's obsession with tactics and the "modulo" — Italian for formation.

Known for his three-man defense, Conte was asked if he would change to a more traditional four-man backline.

"Only in Italy are we fixated on formations," Conte snapped at a reporter's question over the "modulo." ''I've coached in England and they're not the least bit interested in that there. I want to see courage and intensity, which we're trying to express. The rest is all crap." 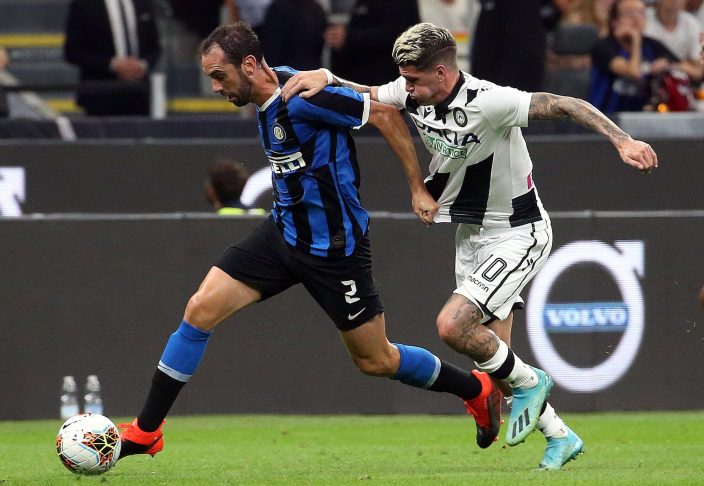 Inter Milan's Diego Godin, left, challenges for the ball with Udinese's Rodrigo De Paul during the Italian serie A soccer match between Inter and Udinese at the San Siro Stadium in Milan, Italy, Saturday, Sept. 14, 2019. (Matteo BazziANSA via AP)

When Conte guided Juventus to three straight Serie A titles from 2012-14, his "BBC" defense of Andrea Barzagli, Leonardo Bonucci and Giorgio Chiellini was the backbone of the club's success.

When he took over Chelsea in 2016, he used a 4-1-4-1 formation during dispiriting early-season losses to Arsenal and Liverpool before quickly changing to a 3-4-2-1 with David Luiz, César Azpilicueta and Gary Cahill going on to anchor the defense in a campaign that ended with the Premier League title.

At Inter, Conte is using Diego Godin, Stefan de Vrij and Milan Skriniar to anchor a 3-5-2 and Inter has started with three wins from three matches to open up a two-point lead over Bologna and eight-time defending champion Juventus. 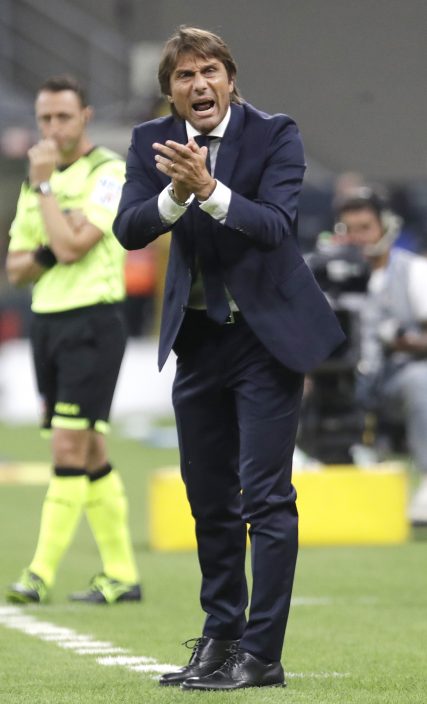 It's the first time Juventus has not been atop the standings since March 2018.

Inter's early success will be tested against struggling AC Milan in the city derby on Saturday.

"Modern football evolves and you have to keep up with the times," Conte said. "Enthusiasm isn't tied to results but rather what we're trying to do. Rome was not built in a day."

Mario Mandzukic could be on his way to Qatar after being left off Juventus' squad for the Champions League group stage.

"There are market opportunities that present themselves. Mario has been a very important player for us over the years, he proved himself at every level, there is a possibility and in agreement with him, the coach and his agent, we decided it was best he didn't come on this trip," Juventus sporting director Fabio Paratici said before Juve's scoreless draw at Fiorentina on Saturday, confirming that there was an offer from Qatar for the striker.

Mandzukic scored goals in the double figures across all competitions for Juventus each of the past four seasons but new coach Maurizio Sarri has preferred to use Gonzalo Higuain in support of Cristiano Ronaldo this season.

Midfielder Emre Can was also left off the Champions League squad, and had to apologize to the club after saying he was "furious" over the decision.

Italy's run to the quarterfinals of the Women's World Cup has put more of a spotlight on the women's Serie A.

The 12-team league opened its season over the weekend with the three favorites, two-time defending champion Juventus, AC Milan and Fiorentina the only teams to post victories.

The Gazzetta dello Sport had a full page of coverage Sunday and Monday.

Inter Milan, making its debut in the top division, drew 2-2 with Verona.

Among the national team players to score were Cristiana Girelli for Juventus and Milan captain Valentina Giacinti, who led the league with 21 goals in 21 matches last season.

Texas slugger Gallo still isn't sure if he had cor ...

Serie A goalscorers take a knee in league blighted by racism

Lazio forward Immobile scoring at rate not seen in 61 years

Inter's mid-season slump is back as title challenge falters

Sarri sheds his stubborn style at Juventus and finds success