James Reimer and Anton Forsberg combined for a shutout as the Carolina Hurricanes beat the Tampa Bay Lightning 3-0 in an NHL preseason game in Tampa, Florida, on Tuesday night.

Reimer and Forsberg each played half the game for the Hurricanes, who reached the Eastern Conference final last spring after missing the playoffs for nine straight years. Reimer started and made eight saves before being replaced by Forsberg, who had seven saves. 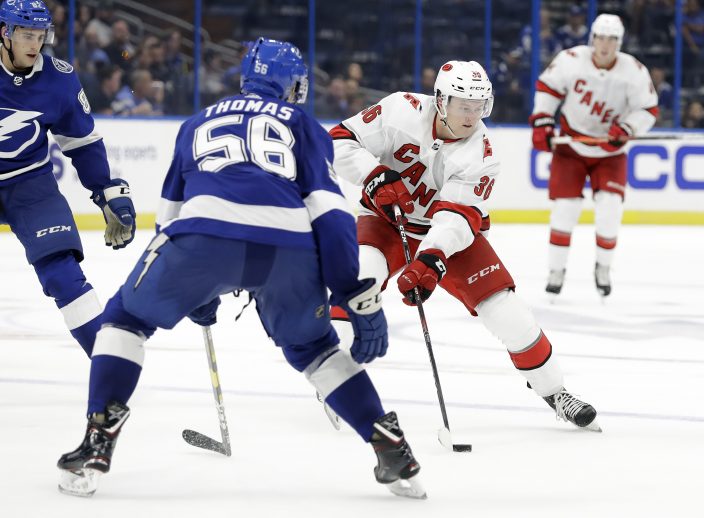 Scott Wedgewood played the entire game in goal for the Lightning and had 34 saves.

In Columbus, Ohio, Emil Bemstrom had a goal and an assist to lift the Blue Jackets to a 4-1 win over the Buffalo Sabres. 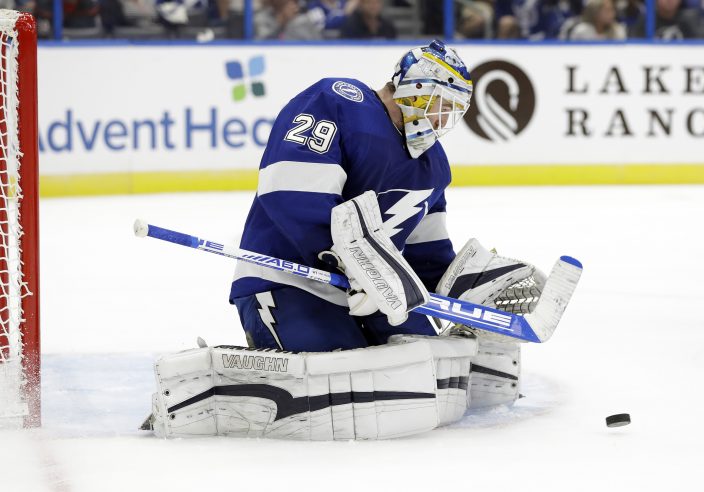 Tampa Bay Lightning goaltender Scott Wedgewood (29) makes a save on a shot by the Carolina Hurricanes during the third period of an NHL preseason hockey game Tuesday, Sept. 17, 2019, in Tampa, Fla. (AP PhotoChris O'Meara)

Kole Sherwood, Sonny Milano and Zac Dalpe also scored for the Blue Jackets. Sherwood's goal, with 4:12 left in the second was the game-winner.

Joonas Korpisalo started in goal for Columbus, and stopped all 12 shots he faced before being replaced by Matiss Kivlenieks, who made 16 saves and was credited with the win.

Jake McCabe scored Buffalo's lone goal. Sabres starter Linus Korpisalo made 18 saves in his half of the game, while Andrew Hammond took the loss after allowing two goals on 13 shots. 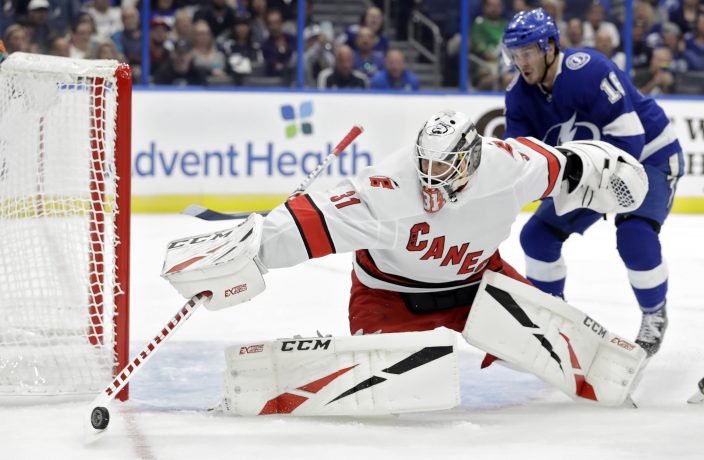 In Uniondale, New York, Mason Jobst scored with 53 seconds left in overtime to help the Islanders rally for a 3-2 victory over the Philadelphia Flyers.

Derick Brassard and Jordan Eberle also scored for the Islanders. Eberle's goal with 1:34 left in regulation tied the score 2-2. 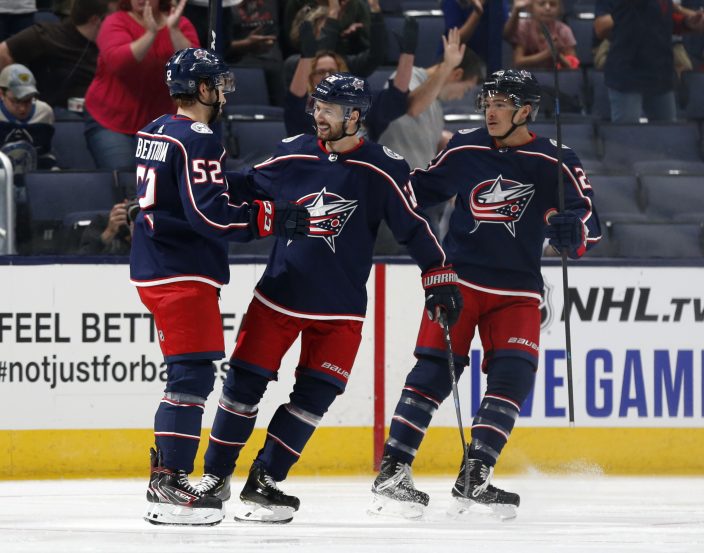 Jared Coreau made 10 saves in the second, third and overtime periods to get the win. Coreau replaced starter Thomas Greiss, who started the game and made 14 saves.

Carter Hart started the game for the Flyers, and made 14 saves before giving way to J.F. Berube midway through the game. Berube allowed three goals on 23 shots against his former team. 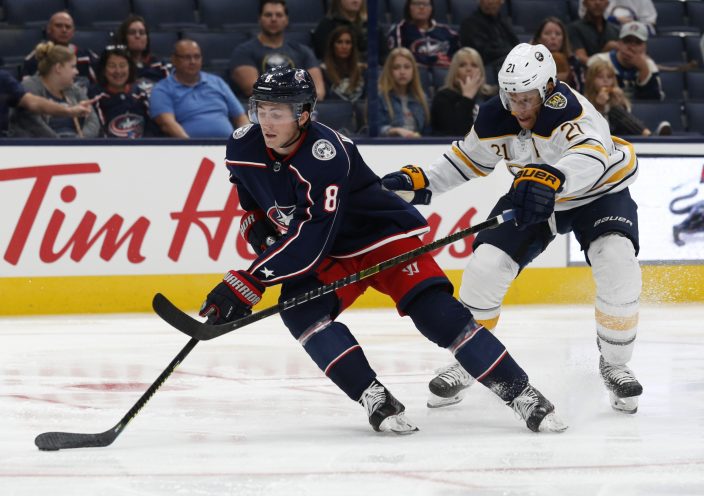 In St. John's, Newfoundland, Tristan Scherwey had a goal and an assist to help the Ottawa Senators beat the Toronto Maple Leafs 3-1.

Scherwey, a training-camp invitee who has spent the last 10 seasons playing for SC Bern in Switzerland, jumped on a loose puck on a Toronto power play and fired it past Kasimir Kaskisuo to give Ottawa a 2-1 lead at 9:45 of the third period. 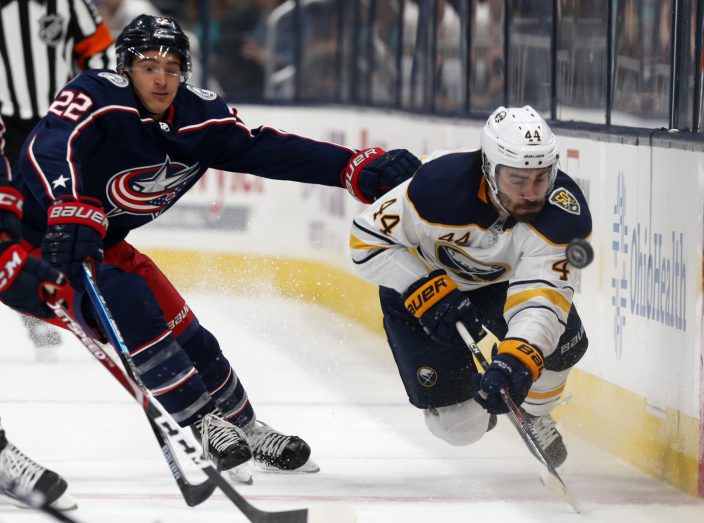 Max Lajoie also scored for the Senators, with an assist by Scherwey, in an otherwise uneventful first period. Anthony Duclair added a goal late in the third.

Kasperi Kapanen scored the lone goal for the Maple Leafs to tie the game early in the third. Mitch Marner, who had missed the opening of training camp before signing a six-year, $65.358 million deal last Friday, had an assist on the play.

Frederik Andersen started in goal for Toronto and stopped 12 shots through the first 40 minutes, before Kaskisuo allowed two goals on five shots in the third.

Anders Nilsson stopped all 13 shots he faced through the first two periods for Ottawa. Marcus Hogburg had 11 saves in the third.