St. Louis maintained its two-game lead in the NL Central over the second-place Chicago Cubs, who lost to Cincinnati. The Nationals increased their lead for the NL's top wild card to 1 1/2 games over the Cubs and Milwaukee Brewers.

Corbin (13-7) struck out 11 while giving up two unearned runs and five hits in six innings. He walked four in his second win in two starts at Busch Stadium. The last one came May 20, 2016, when he pitched for the Diamondbacks. 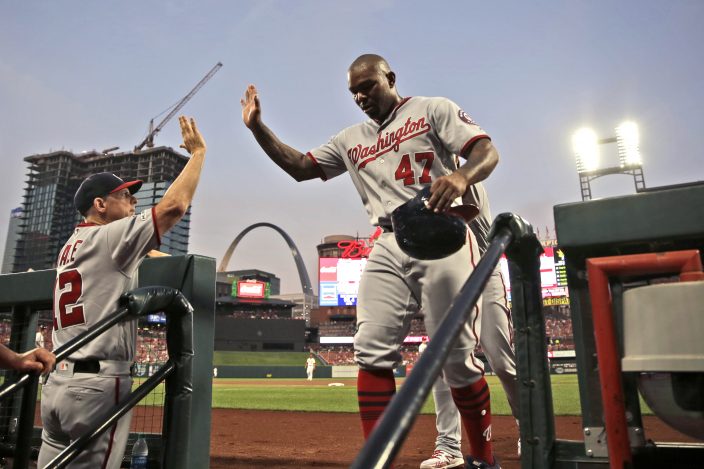 Washington Nationals' Howie Kendrick (47) is congratulated by bench coach Chip Hale after scoring during the second inning of the team's baseball game against the St. Louis Cardinals on Tuesday, Sept. 17, 2019, in St. Louis. (AP PhotoJeff Roberson)

Daniel Hudson got the last six outs for his fourth save.

Miles Mikolas (9-14) pitched six innings before he was lifted for a pinch-hitter. He allowed three runs on eight hits and became the first Cardinals pitcher to lose 14 games in a season since Braden Looper went 12-14 in 2008.

Kendrick hit a solo homer on the grass beyond the center field wall in the fourth, giving Washington a 2-1 lead. Since returning from the Injured List on Aug. 12, Kendrick is hitting. 466 (27 for 58) with seven doubles, four homers, 13 RBIs, four walks and 14 runs scored in 23 games. His 16 home runs this season are most since he hit a career-high 18 in 2011 when he played for the Los Angeles Angels. 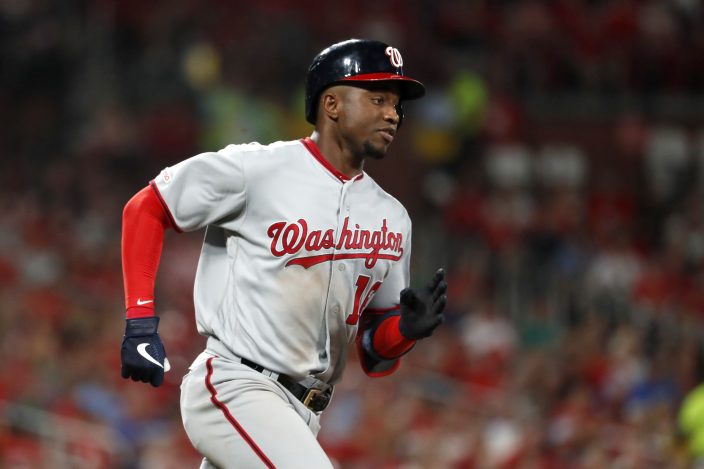 Washington Nationals' Victor Robles heads to first on an RBI single during the sixth inning of a baseball game against the St. Louis Cardinals on Tuesday, Sept. 17, 2019, in St. Louis. (AP PhotoJeff Roberson)

Juan Soto led off the sixth with a double. The play was close at second and St. Louis challenged the safe call. The decision stood after a review of 1 minute, 29 seconds. He later scored on a two-out single by Victor Robles to extend Washington's lead to 3-1.

The Cardinals made it 3-2 in the sixth when Harrison Bader stole second as pinch-hitter Jose Martinez struck out. The throw by Yan Gomes went into center for an error and Tommy Edman scored from third.

Robles drove in a run in the eighth on a single and Gomes hit an RBI double to give the Nationals a 5-2 edge. Washington added a run in the ninth on a sacrifice fly by Juan Soto. 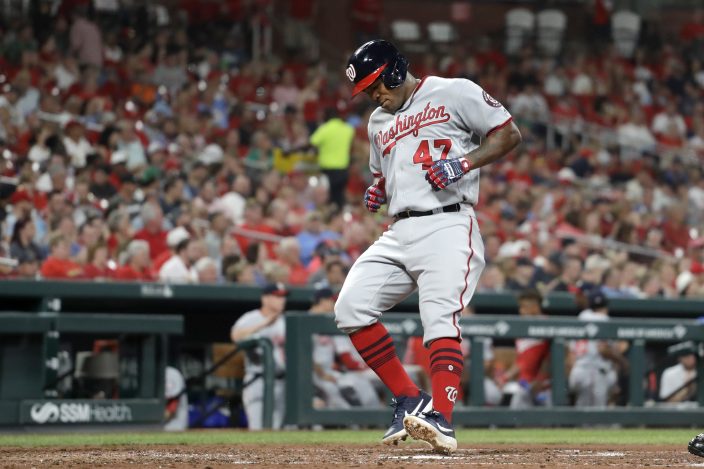 St. Louis loaded the bases with one in the third but only managed one unearned run to tie it 1-1. Mikolas scored on an error by shortstop Trea Turner with two outs.

Washington took a 1-0 lead in the second. Kendrick led off with a triple that hit the wall in center. He scored on Asdrubal Cabrera's sacrifice fly. 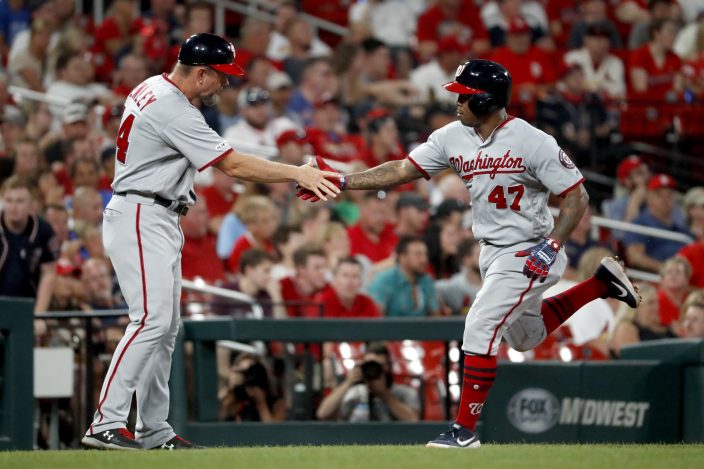 Washington Nationals' Howie Kendrick (47) is congratulated by third base coach Bob Henley after hitting a solo home run during the fourth inning of the team's baseball game against the St. Louis Cardinals on Tuesday, Sept. 17, 2019, in St. Louis. (AP PhotoJeff Roberson)

Corbin's 11 strikeouts pushed his season total to 224. Corbin along with Stephen Strasburg (235) and Max Scherzer (222) have helped the Nationals become the first National League team in National League history to have at least three pitchers record at least 222 strikeouts in a season.

Kendrick's home run in the fourth was the 215th homer this season for the Nationals. It ties a franchise record set in 2017. Washington has 10 players with at least 10 home runs this year, tied for second in the National League with the Chicago Cubs and behind the Los Angeles Dodgers (11). 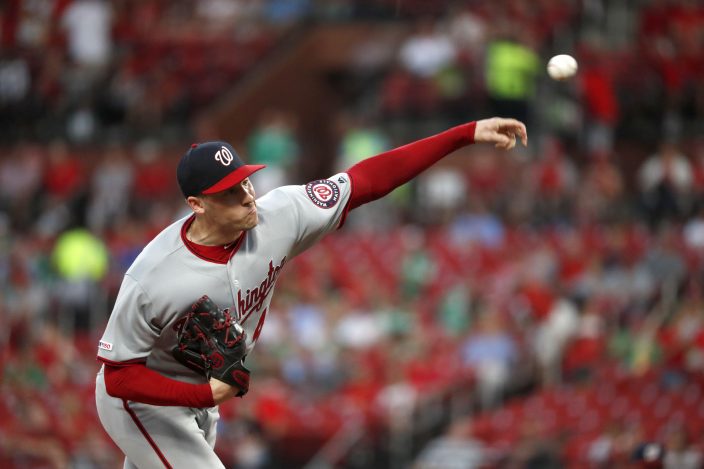 Nationals: Manager Dave Martinez, who turns 55 on Sept. 26, remains in the hospital. Martinez, who is in his second season managing the Nationals, had a diagnostic procedure called a cardiac catheterization performed Monday in Washington. "There's a lot more energy in the voice and I think they're just doing a few more tests," Chip Hale said Tuesday before the game. "He's resting and as soon as he can travel he'll be with us."

Cardinals: C Matt Wieters (left calf strain) has been out since Aug. 31. He has responded well doing baseball activities the last two days. "Wieters is cleared," St. Louis manager Mike Shildt said. "He's available." Wieters gives Shildt a left-handed hitting option off the bench. "We haven't really had it," Shildt said. "It's nice to have that as an option." 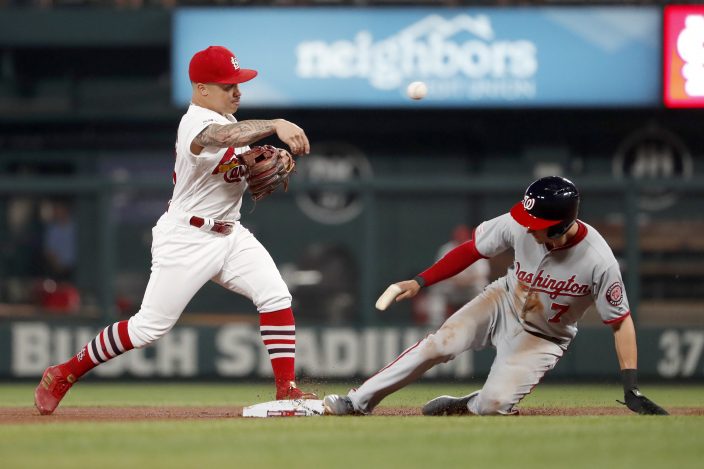 Washington Nationals' Trea Turner, right, is out at second as St. Louis Cardinals second baseman Kolten Wong turns the double play during the third inning of a baseball game Tuesday, Sept. 17, 2019, in St. Louis. Anthony Rendon was out at first. (AP PhotoJeff Roberson)

Nationals: Max Scherzer (10-6, 2.65)is a St. Louis native. In four career starts in Missouri, Scherzer has pitched 25 innings and allowed four earned runs for a 1.44 ERA. He's struck out 35 with just four walks.

NBA time zone: body clocks get a reset inside the bubbl ...

The father and son jailed on murde ...