Miguel Rojas had a career-high six RBIs, including a three-run double, and the Miami Marlins rallied past the Arizona Diamondbacks 12-6 on Tuesday night.

The Marlins pounded 17 hits to beat Arizona for the fourth time in six tries this year. The Diamondbacks' slim playoff hopes took another hit with the loss: They're 5 ½ games behind the Chicago Cubs and Milwaukee Brewers for the second NL wild-card spot with 10 to play.

The Diamondbacks led 4-2 after five innings. Left-hander Alex Young had a solid start, giving up two runs over five innings. Matt Andriese (5-5) came on in relief and gave up three runs — all with two outs in the sixth — when Rojas hit his bases-clearing double that barely stayed inside the left-field line.

Arizona Diamondbacks relief pitcher Matt Andriese adjusts his cap after giving up a three-run double to the Miami Marlins during the sixth inning of a baseball game Tuesday, Sept. 17, 2019, in Phoenix. (AP PhotoMatt York)

The Marlins extended their lead to 10-4 in the seventh with five more runs. Miami sent nine batters to the plate during the rally, which was capped by Rojas' two-run single. Arizona's Jimmie Sherfy gave up all five runs without recording an out, and his ERA spiked from 2.51 to 5.65.

Caleb Smith (9-10) got the win, giving up four runs over five innings. Bryan Holaday had three hits, including his fourth homer of the season. Rojas had three doubles — in the third, sixth and ninth innings — and finished with four hits.

Kevin Cron hit a pinch-hit, solo homer for the Diamondbacks. It was his sixth in the big leagues. He hit 39 homers in the minors this season, mostly at Triple-A Reno. 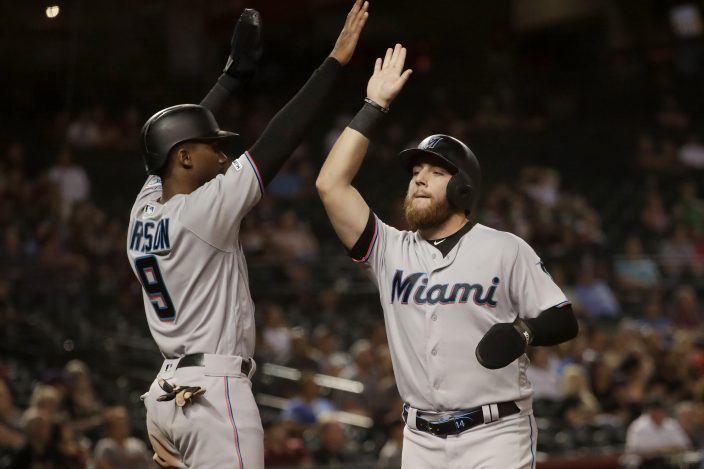 Miami Marlins' Austin Dean high-fives Lewis Brinson (9) after they scored on a hit by Miguel Rojas during the seventh inning of a baseball game against the Arizona Diamondbacks, Tuesday, Sept. 17, 2019, in Phoenix. (AP PhotoMatt York)

The Diamondbacks had 13 hits.

Christian Walker was hit by a pitch in the first inning. It was the 67th time that's happened to a Diamondbacks player this season, which tied a club record. 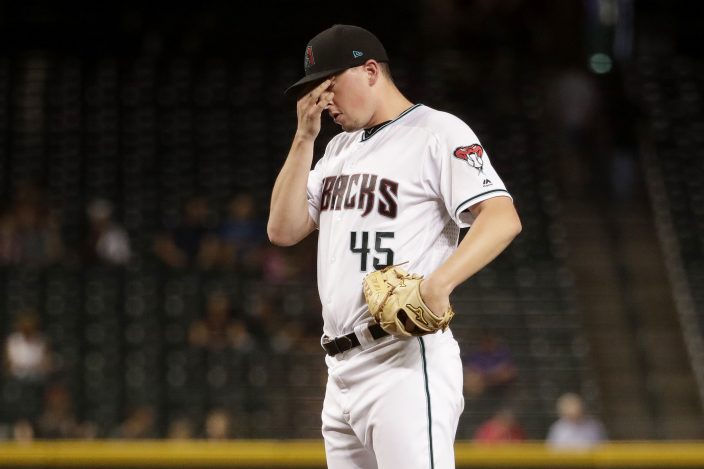 Arizona Diamondbacks pitcher Taylor Clarke pauses after giving up a run to the Miami Marlins during the eighth inning of a baseball game Tuesday, Sept. 17, 2019, in Phoenix. (AP PhotoMatt York)

Marlins: Starting C Jorge Alfaro was hit on his non-throwing hand by Ildemaro Vargas' bat in the first inning. Alfaro stayed in the game for the rest of the inning, but was replaced by Holaday in the second. The Marlins called the injury a contusion.

Diamondbacks: CF Ketel Marte left the game in the fifth inning because of what the team called back stiffness. He was 2 for 2 with a double before the injury. ... SS Nick Ahmed was scratched from the lineup a few hours before the game because of an injured finger on his throwing hand, which he hurt in Monday's game. Manager Torey Lovullo said Ahmed is day-to-day. ... RHP Luke Weaver (forearm tightness) threw a bullpen on Tuesday. Lovullo said the team could try to get him game action during the season's final 10 days. 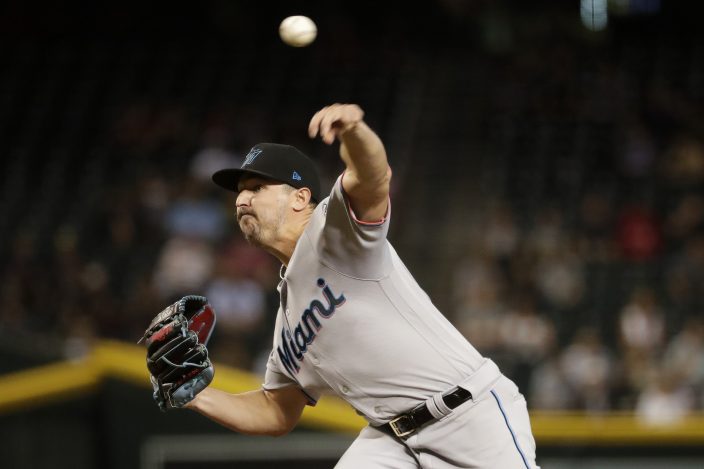 Plenty of eyes on Jamal Adams as Seahawks get on field

One of the first things Pete Carro ...