The eight courses feature bunkers sculpted out of sand, pristine greens and fairways unlike any others. They are most often praised by pros who have played them, with Royal Melbourne and Metropolitan, where Clayton is a member, generally regarded as the pick of the bunch. 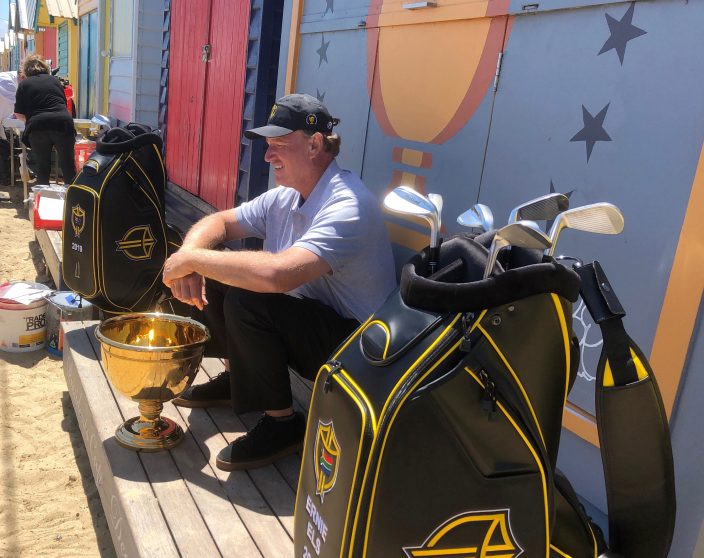 In this Nov. 26, 2018, file photo golfer Ernie Els, captain of the International Team at this year's Presidents Cup, sits in front of a beach house at Brighton in Melbourne, Australia. Royal Melbourne golf course will host the Presidents Cup in December for the third time, and is where the International Team won its only previous tournament against the United States in 1998. (AP PhotoDennis Passa, FILE)

Royal Melbourne will host the Presidents Cup in December for the third time — it's where the International Team won its only previous tournament against the United States in 1998.

"The sandbelt courses in Australia are among the best in the world and some of my favorites to play," Tiger Woods, who will captain the U.S. team and could play as well, said during a promotional visit to Melbourne.

Here are some other things to know about the sandbelt courses, and Royal Melbourne in particular. 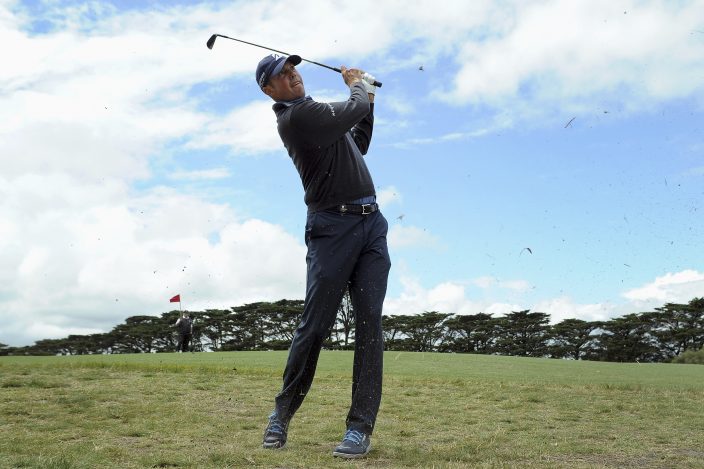 In this Nov. 23, 2013, file photo Matt Kuchar from the U.S. hits an approach shot on the second hole during the third round of the World Cup of Golf at Royal Melbourne Golf Course in Melbourne, Australia. Kuchar will play for the U.S. Team as Royal Melbourne golf course will host the Presidents Cup in December for the third time, and is where the International Team won its only previous tournament against the United States in 1998. (AP PhotoAndy Brownbill, File)

"The bunkers, as much as anyone tries to copy, they never work," Clayton, known as 'Clayts' among his fellow pros and friends, said in an interview with The Associated Press.

The sandbelt courses are considered to be Royal Melbourne, Victoria, Metropolitan, Huntingdale, Commonwealth, Yarra Yarra, Kingston Heath and Peninsula. They are all close to one another — Victoria is across the road from Royal Melbourne — making it popular with tourists lucky enough to garner an invitation to even a few of the prized clubs. In this case, who you know means everything.

"Alister MacKenzie came down and built those shapes, the sand-faced bunker, and it worked so well," the Melbourne-born Clayton said. "They have a great bunch of difficult par-4s, a great group of mid-length par-3s from 140 and 170 yards. At least 20 world-class holes."

"They are the best group of courses in the world with New York and London. But if you were to pick out one thing, you would talk about those par-3s."

In 1931, two years before MacKenzie designed Augusta National in Georgia, home of the Masters, the British golf course architect designed the West Course at Royal Melbourne.

Richard Forsyth has been golf course superintendent at Royal Melbourne for 10 years. Before that, he spent 15 years at Metropolitan, where golfers who showed up for the 2001 World Match-Play Championship won by Steve Stricker said they often mistook the fairways for greens because of the immaculate growth from the sandy loam soil.

Asked if he pinches himself with his good fortune to have been in charge of two of the best sandbelt courses for so long, Forsyth says: "I often certainly believe that."

Forsyth says the weather has been cooperating in the lead-up to the Presidents Cup, with above-average rainfall over recent months.

The Presidents Cup will feature a composite course at Royal Melbourne, which was first used 60 years ago to host the World Cup, then known as the Canada Cup.

It contains 12 holes from the West Course and six from the Alex Russell-designed East course. The composite course, which is the norm for major tournaments, includes what many believe to be the best of both courses. But logistically, it means golfers don't have to cross a busy road during their rounds.

Forsyth says they'll start paying extra attention to the holes on the composite course in mid-November.

"We try to consistently manage both courses, at same time, same level," he said. "To bring the two together is not a big shift."

The first 10 holes of the composite course are from the West course, followed by the six from the East, and closing with usual first and second holes from the West.

The International team will be led by Marc Leishman, Louis Oosthuizen, Adam Scott and Hideki Matsuyama, who have a combined 17 Presidents Cup appearances. The four newcomers to the event will be Abraham Ancer, Haotong Li, Cameron Smith and C.T. Pan.

Four captains' picks will be added. For the International team that will likely include Australian favorite Jason Day.

International captain Ernie Els said his team will try to overcome the odds to beat the Americans for only the second time in 21 years.

Column: Rivalries in golf require more than a great year