Ryan O'Reilly stockpiled quite the hardware to show off at his Stanley Cup day.

On display next to the Cup he helped the St. Louis Blues win in June were the Conn Smythe Trophy as playoff MVP and the Selke Trophy as the NHL's best defensive forward. Any player would gladly celebrate with those shiny centerpieces, though O'Reilly — at 28 and on his third team — is only now showing he is this kind of elite player.

"I still think I have another gear to get to, and that's my plan," O'Reilly said. "There's still many things to improve on. There are areas to be better. One thing, too, is I think power-play production for myself could've been a lot better, and that's an area I need to grow. There's some stuff I've been working on to try to improve that." 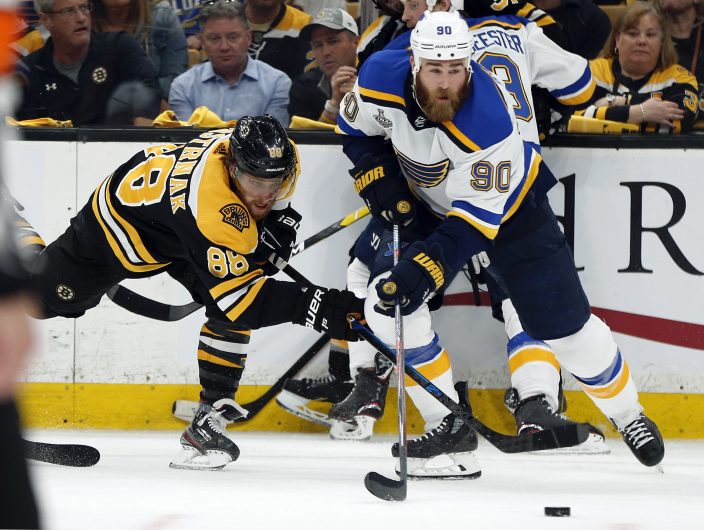 FILE - In this June 12, 2019, file photo, St. Louis Blues' Ryan O'Reilly (90) moves the puck away from Boston Bruins' David Pastrnak, left, of the Czech Republic, during the second period in Game 7 of the NHL hockey Stanley Cup Final, in Boston. O’Reilly stockpiled quite the hardware to show off at his Stanley Cup day. On display next to the Cup he helped the St. Louis Blues win were the Conn Smythe Trophy as playoff MVP and the Selke Trophy as the NHL’s best defensive forward. (AP PhotoMichael Dwyer)

O'Reilly had nine points in the Cup Final against Boston playing through a cracked rib. He was nearly a point-a-game player during the regular season. Yet, somehow he still seemed underappreciated outside his peers.

"People didn't realize how good of a player Ryan O'Reilly was until this year," Vancouver forward Bo Horvat said. "All the players knew how good he was and how big of a part of that team he was and how special of a player — just his two-way game, his faceoffs. Obviously his point production this year was outstanding. His play in the playoffs, winning MVP and obviously the Stanley Cup, it was a great year for him and I think he opened up a lot of eyes."

O'Reilly said he figured something out during the playoffs: how to clear out some "garbage" in his brain to focus on what matters. The challenge now is trying to duplicate that during an 82-game regular season. 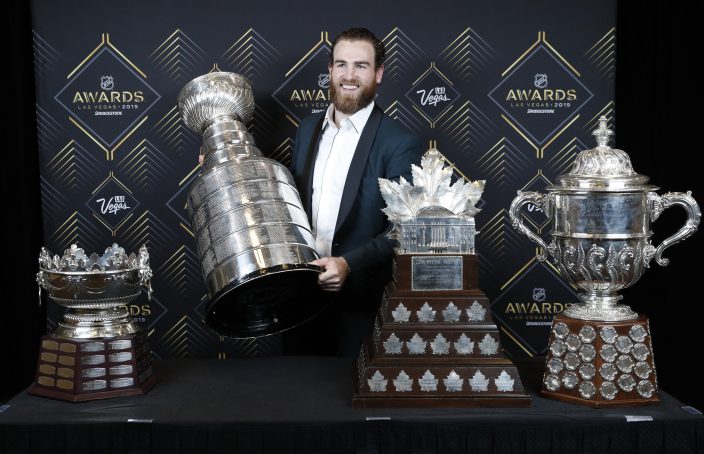 FILE - In this June 19, 2019, file photo, St. Louis Blues' Ryan O'Reilly poses with, from left, the Frank J. Selke Trophy, for top defensive forward; the Stanley Cup; the Conn Smythe Trophy, for MVP during the playoffs; and the Clarence S. Campbell Bowl, for the Western Conference playoff champions, at the NHL Awards in Las Vegas. Ryan O’Reilly stockpiled quite the hardware to show off at his Stanley Cup day. On display next to the Cup he helped the St. Louis Blues win were the Conn Smythe Trophy as playoff MVP and the Selke Trophy as the NHL’s best defensive forward. Any player would gladly celebrate with those shiny centerpieces, though O’Reilly at 28 and on his third team is only now showing he’s this kind of elite player.(AP PhotoJohn Locher, File)

"Just go out there and completely be in the moment and go from there," O'Reilly said. "That's a big lesson for myself, trying to establish that more. Be clear and find a way to take all the noise and all the stuff that you don't need in your head and just throw it out. It just seems like when I did that, I tend to get more bounces and things went my way."

Winning the Selke was evidence enough of O'Reilly's strong regular season. He ranked eighth in the league in faceoffs, which is part of what makes him so tough to play against.

"He's just so competitive on draws," Chicago captain Jonathan Toews said. "I'm one of those guys I want to start every shift with the puck and if we're going up against a guy like that that could catch fire, and we might be chasing it down for a whole period. He's obviously not one of the fastest guys out there, but he's so good positionally and just aware of where guys are and what to do with the puck. I think he's just an all-around super intelligent player." 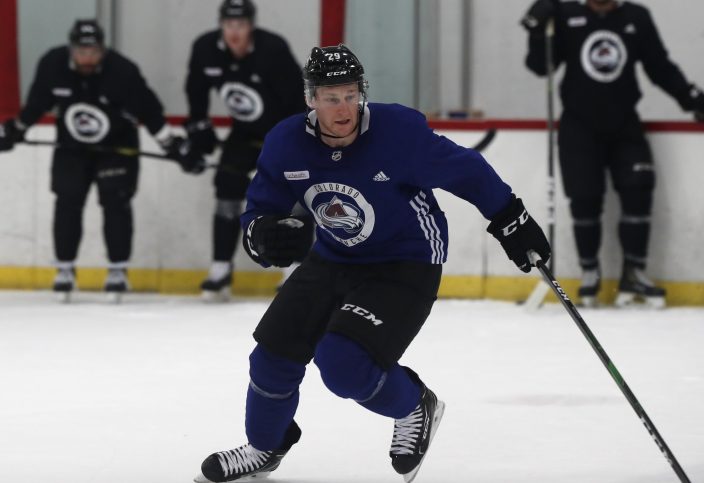 FILE - In this Friday, Sept. 13, 2019, file photo, Colorado Avalanche center Nathan MacKinnon takes part in a drill in the opening session of the team's NHL hockey training camp in Englewood, Colo. Already considered one of the fastest hockey players on earth, MacKinnon carried the Colorado Avalanche to within one victory of the Western Conference final and is the biggest reason they’re a fashionable Cup contender this season. (AP PhotoDavid Zalubowski, File)

Already considered one of the fastest hockey players on earth, MacKinnon carried the Colorado Avalanche to within one victory of the Western Conference final and is the biggest reason they're a fashionable Cup contender this season. Fellow Cole Harbour, Nova Scotia, native Sidney Crosby said MacKinnon is in the category of Pittsburgh teammate Evgeni Malkin and Edmonton star Connor McDavid as players who can take over games.

"We saw a pretty good glimpse of that in the playoffs," Crosby said. "He did it consistently. ... I'd expect him to take another big step." 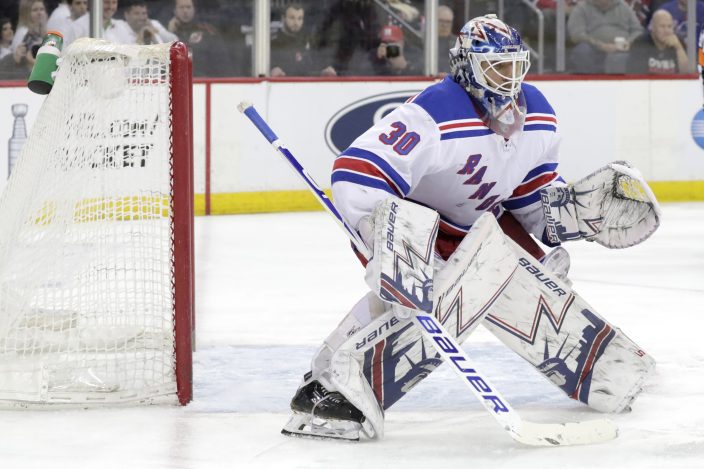 FILE - In this April 1, 2019, file photo, New York Rangers goaltender Henrik Lundqvist, of Sweden, is shown in action against the New Jersey Devils during the second period of an NHL hockey game, in Newark, N.J. “The King” is 37 yet could be the difference between the New York Rangers missing the playoffs for a third consecutive season and contending ahead of schedule. (AP PhotoJulio Cortez, File)

Rookie Avalanche defenseman Cale Makar said it's electrifying to watch MacKinnon on the ice. And the 24-year-old center is an example to his younger teammates and those around the league.

"He's just a super committed guy," Makar said. "He loves hockey, and that's the way he plays. It shows on the ice. Just the way he handles his routine is very specific and you just learn from star players like that."

"The King" is 37, yet could be the difference between the New York Rangers missing the playoffs for a third consecutive season or contending ahead of schedule. The longtime starting goaltender isn't fazed by young backup Alexandar Georgiev and top prospect Igor Shesterkin looming in the not-too-distant future.

"My approach will not change," Lundqvist said. "I need to reach my top level no matter what, no matter who's next to me or where the team is at."

Lundqvist said the start of last season was the best he had felt in a while. He posted a 2.68 goals-against average and .919 save percentage in his first 22 starts last season, which would be great for an improved Rangers team with a better blue line and more firepower up front.

"That's the level I just need to reach and sustain throughout the year, and then I know I can make a difference," Lundqvist said.

The release of "Ovi O's" cereal marked his 34th birthday. If anyone has shown age is just a number, it's Ovechkin, who is now the Washington Capitals' oldest player and still could score 50 goals. Even though Ovechkin said he's "not a grandpa" and trained differently this summer, don't expect him to alter his style too much.

Ovechkin preceded O'Reilly as playoff MVP when he led the Capitals to the first title in franchise history in 2018. After a full summer off, he is refreshed to try to do it again.

"He's obviously a different talent," Washington winger Carl Hagelin said. "A guy like that doesn't come around very often. He's one of those energetic guys even though he's 33, 34 years old. He comes to the rink with a smile every day. He does what he has to do."

There may not be a more complete winger in the NHL than Stone, who put up 12 points in the Vegas Golden Knights' seven-game first-round series against San Jose. Stone is free of Ottawa's long-term rebuild and starting a $76 million, eight-year contract with big expectations to help Vegas make another long playoff run.

"You get a No. 1 forward," Golden Knights forward Jonathan Marchessault said. "He's an unbelievable player. He does everything well on the ice. He puts up great numbers every year, and he's a successful player."

Vegas is one of several NHL teams without a captain. That might not last long with Stone in the fold.

"He's not a guy that's trying to be a leader," Marchessault said. "He's just a born leader, so it's just natural for him."

The 2018 No. 1 pick had 44 points to lead all rookie defenseman. It was just the floor for where Dahlin wants to start.

"Of course I want to score more goals, have more assists and stuff like that," Dahlin said. "Last season, I had more points than I expected, but this year, I always want more. That's why I play."

The Buffalo Sabres are counting on that in their first season under coach Ralph Krueger. Captain Jack Eichel has big expectations for Dahlin, who he believes "lived up to all the hype."

"You look at how good he was last year in year one and how much more he knows now," Eichel said. "I think he's primed to have a monster season."