The Latest on Britain's impending departure from the European Union (all times local):

Britain's Supreme Court is set to resume its historic hearing to determine whether Prime Minister Boris Johnson's decision to suspend Parliament was illegal. 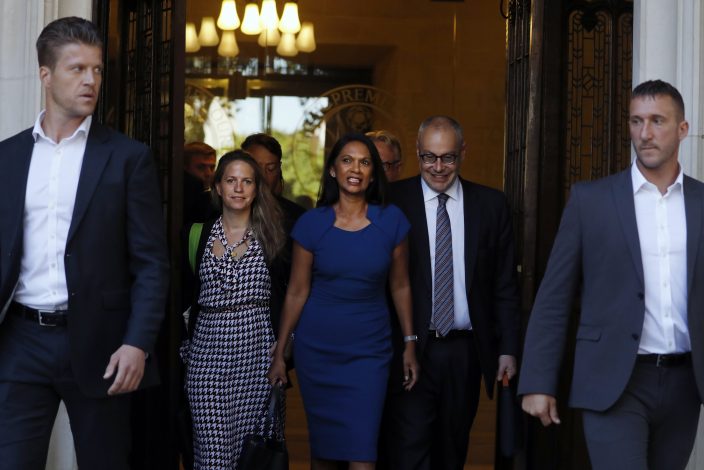 Anti-Brexit campaigner Gina Miller, centre, leaves The Supreme Court flanked by security, in London, Tuesday, Sept. 17, 2019. The Supreme Court is set to decide whether Prime Minister Boris Johnson broke the law when he suspended Parliament on Sept. 9, sending lawmakers home until Oct. 14 — just over two weeks before the U.K. is due to leave the European Union.(AP PhotoAlastair Grant)

The case resumes Wednesday for a full day of testimony. It is expected to conclude Thursday.

Judges must determine if Johnson overstepped his authority by suspending Parliament for a five-week period during the run-up to the Oct. 31 Brexit deadline for Britain to leave the European Union.

The government's opponents argue that Johnson illegally shut down Parliament just weeks before the country is due to leave the 28-nation bloc for the "improper purpose" of dodging lawmakers' legitimate scrutiny of his Brexit plans. They also accused Johnson of misleading Queen Elizabeth II, whose formal approval was needed to suspend the legislature.

The government claims the suspension was routine, not related to Brexit and a matter for politicians, not the court.

Speaking at the European Parliament in Strasbourg, France, Juncker, who met with British Prime Minister Boris Johnson on Monday, said a no-deal Brexit "might be the choice of the U.K., but it will never be ours."

After the debate, the European Parliament is set to adopt a resolution laying out its concerns about Britain's impending departure from the 28-nation bloc on Oct. 31. Johnson has been adamant the U.K. will leave the EU on that scheduled date with or without a withdrawal agreement.

The main sticking point over a Brexit deal is the Irish border backstop, which would require Britain to retain some EU trade rules in order to avoid a hard border between EU member Ireland and the U.K.'s Northern Ireland.

An Australian war hero will be awa ...