Climate change has led to deadlier wildfire seasons in the American West and more severe hurricanes and storms barreling up the Southern and Eastern coasts. The dramatic weather frequently knocks out power, leading some residents of storm-ridden or fire-prone areas to seek backup power options for their homes.

In California, utilities are shutting off power proactively to help prevent forest fires on days when the risk is high, impacting millions of customers.

"The electric system in the U.S. is 100 years old, so that system is struggling in light of extreme weather," said Audrey Lee, vice president of energy services at Sunrun, which leases and sells solar energy systems. 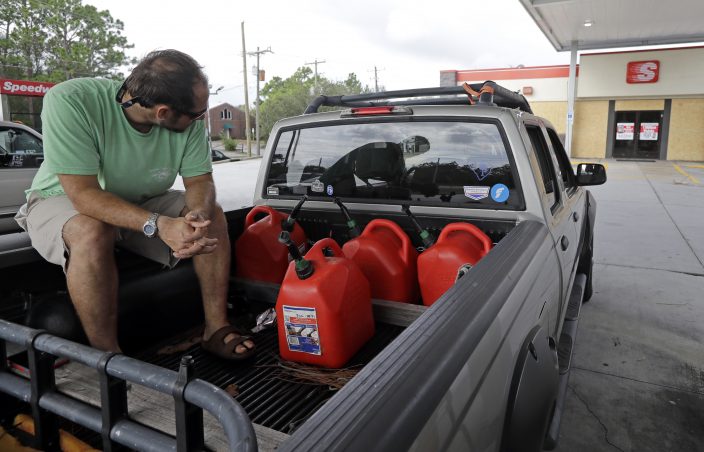 FILE - In this Sept. 17, 2018, file photo Nick Monroe waits at a gas station in hopes a truck will bring fuel for his vehicles and generator near Wilmington, N.C., in preparation for Hurricane Florence. Backup power options range from gasoline-powered portable generators, which can cost $1,000 or more, to solar panels plus batteries, which cost tens of thousands of dollars to purchase and install. (AP PhotoChuck Burton, File)

Backup power options range from gasoline-powered portable generators, which can cost $1,000 or more, to solar panels plus batteries, which cost tens of thousands of dollars to purchase and install. Prices of solar panels and batteries have been coming down, making solar-plus-storage more attractive.

After Hurricane Maria, which destroyed much of Puerto Rico's electric grid in 2017 and left millions of residents of the island territory without power for months, many critical buildings such as hospitals and fire stations were outfitted with solar panels and batteries to better withstand the next major storm.

One resident in California's wine country, which has been scorched by deadly forest fires over the past few years, installed solar panels and two Tesla Powerwall batteries after a forest fire knocked out power to his new home for two days. 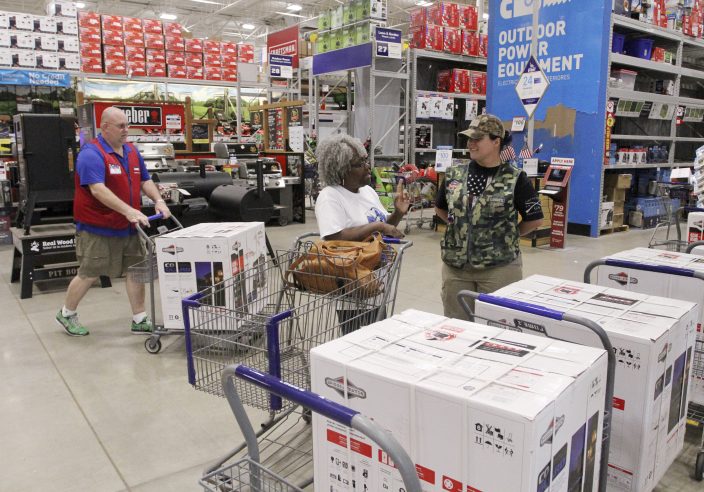 FILE - In this Sept. 3, 2019, file photo store associates help customers with generators and supplies at Lowes in New Bern, N.C., as residents bracing for potential storm weather. Backup power options range from gasoline-powered portable generators, which can cost $1,000 or more, to solar panels plus batteries, which cost tens of thousands of dollars to purchase and install. (Gray WhitleySun Journal via AP, File)

"I told my wife, 'We can't do this,'" said Justin Montague, 38, a sales professional. "I wanted to make sure that when I'm at work my kids and my wife are safe."

There are two types of generators: portable, which typically weigh about 200 pounds and can be wheeled outside for use, or stationary — known as standby generators — which are permanently installed.

Portable generators are the most popular option, accounting for about 95% of generator sales, and when a storm is reeling toward a community people flock to stores to buy them, according to Consumer Reports.

The upfront cost is more affordable than options such as standby generators or solar panels, but buying the vast quantities of gasoline needed to run a generator — and replacing that gasoline when it expires — adds up. They also require work to keep gasoline on hand and feed it into the generator.

"If you have a generator running at full capacity, they can burn through close to a gallon an hour," said Paul Hope, senior home editor at Consumer Reports. The generator will continue supplying energy for as long as you have fuel on hand.

Portable generators must be operated outside, at least 20 feet away from a home with the exhaust facing away from the house, because they emit carbon monoxide, which can be deadly.

A more permanent — and costly — option is a standby generator, which is professionally installed outside a home and hooked up to a fuel source such as natural gas. Standby generators can be connected to a circuit breaker so a family can still run appliances that are hard-wired into a circuit breaker, such as a furnace or water heater. By contrast, a portable generator typically only works for appliances that are plugged into outlets, such as toasters or smartphone chargers.

Standby generators are best suited to people who live in areas where blackouts happen frequently and last a long time. Standby generators that are hooked up to a natural gas source could run indefinitely, as long as there is no disruption to the natural gas service. Other models that run on propane could power a home from 180 to 349 hours on a 275-gallon propane tank, Hope said.

"They're much quieter, they turn on instantly, they're designed to power your entire house without any compromise," Hope said.

Installing solar panels and batteries requires more investment than other forms of backup power, costing tens of thousands of dollars depending on system size, regional incentives and installation costs, but they can dramatically reduce electricity bills. Companies such as Sunrun and Vivint give customers the option to lease solar panels, requiring less upfront investment.

However, solar panels alone won't get you through a power outage. For that, you will need a battery. That's because solar panels are designed to switch off during a power outage to prevent them from sending electricity to power lines around the house, potentially electrocuting repair crews.

Adding a battery allows solar customers to continue drawing electricity from solar panels during a blackout because an internal switch prevents electricity from being transmitted to the wires around the house.

Battery installations have soared in California, Hawaii, Germany and Australia led by consumers interested in renewable energy or self-sufficiency, according to Navigant Research.

An Australian war hero will be awa ...